Kelly was newly-wed and just 29 when she was diagnosed with a tumour on her pituitary gland. It was successfully removed during surgery but she estimates it took a full three years for her to recover completely. Kelly’s sister, Olympic swimmer Katy Sexton MBE, was among family and friends who helped Kelly through her illness. Katy is now organising fundraising events for Brain Tumour Research through her swimming academy.

“Being diagnosed with a brain tumour has changed my life for the better. It has strengthened my marriage, increased my confidence and motivated me to start my own business.”
I was having a meal with a friend when she broke the news that she suspected I had a brain tumour. It’s not the type of conversation you ever expect to have at a social event but, in a way, I was relieved because it explained the symptoms I had been experiencing.

Three visits to the opticians in just a few months had revealed that my eyesight was gradually deteriorating. It was nothing dramatic and just a small tweak was needed to my prescription to ensure I could see properly with my glasses and contact lenses. I was working as a team leader in an office and wondered whether the time I was spending in front of a computer was affecting my vision. My optician was unable to find an explanation.

It was 2007, just months after Kev, who is 18 years my senior, and I tied the knot. We had both been married before and Kev already had grown-up children with their own families. I never really wanted a family myself and was content with the way things were and with my role as a step-grandmother. I knew it was extremely unlikely that I was pregnant as Kev had had a vasectomy before we met but when my menstrual periods stopped I did a couple of pregnancy tests as I knew this would be the first question my doctor would ask.

Sure enough, the tests came back negative and I had a round of blood tests. I wasn’t unduly bothered when the hospital wrote asking me to go back as something abnormal had shown up. It was by chance that I had the letter in my bag when Kev and I were invited to have Sunday dinner with a doctor friend who I had known for 30 years.

She asked how things were and I showed her the letter. It was then she told me she suspected – and was 99% certain – I had a low-grade tumour on my pituitary gland. Within days I had an MRI scan which revealed there was indeed a tumour the size of a golf ball pressing on my optical nerve. There were more tests and discussions with doctors and I was admitted to the neurological unit at Southampton General Hospital.

I went into surgery shortly before Christmas and underwent a five-and-a-half hour trans-sphenoidal resection in which the tumour, a pituitary adenoma, and my pituitary gland were removed through my nose. I was discharged from hospital two days later, earlier than I would have liked, to continue my recovery at home. There were problems with an infection to a stitch in my nose and if I moved even a fraction I would vomit blood. On top of this I had 18 staples in my right thigh where some fatty tissue had been taken to replace that removed from the top of my nose.

My doctor friend came to the rescue once more, helping me get the assistance I needed with dosages of medication and removing the stitches and staples. My husband, my sister and my mum were all wonderful as I began what turned out to be a long recovery. For three months I was unable to drive and I had a phased return to work and was back full-time within six months. It was a full three years before I felt I was fully myself again.

I put on about three stones in weight and Kev very kindly bought me a lovely new dress so I could feel good about myself at my 30th birthday party. My illness had changed my metabolism and on some days I had a seemingly unquenchable thirst and would stand in the shower drinking as much water as I could from the showerhead.

I’ll be taking medication for the rest of my life. Every morning I wake up with what feels like a severe hangover but the tablets I take sort this out. There is no guarantee that the tumour won’t come back and I continue to be closely monitored with MRI scans and other appointments. The removal of the pituitary gland means I will never have children and I understand some people would find that very hard so I count myself fortunate that it was never something I planned to do.

Looking back I can think of other indicators such as the fact that no matter how much exercise I did or how hard I worked out in the gym, I never sweated. As a teenager I did a lot of fitness and got to the swimming county finals while my sister Katy, who was three years younger, was winning national titles at the age of 15 and went on to swim for GB at the Olympics and the Commonwealth Games.

I am proud to be the inspiration behind the Katy Sexton Swim Academy swimathons for Brain Tumour Research. I was 29 when I had my operation and it is dreadful to learn that brain tumours affect so many young people. It is shocking to discover that brain tumours kill more children and adults under the age of 40 than any other cancer … yet just 1% of the national spend on cancer research has been allocated to this devastating disease.

Eight years on and I feel back to my best, perhaps even better than I have ever felt. Being diagnosed with a brain tumour has changed my life for the better. It has strengthened my marriage, increased my confidence and motivated me to start my own business. I am the proud owner of Woofy Tails Ltd which I set up at our home in Waterlooville, Hampshire, three years ago. I love my life and count myself as very fortunate. 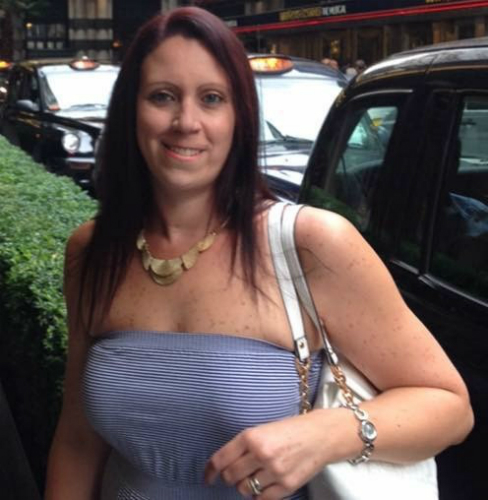