Devoted to her husband and her horse, Kelly Ann was turned away from A&E when her brain tumour symptoms were dismissed as the effects of too much drink. Eventually diagnosed with a low-grade oligodendroglioma brain tumour, Kelly Ann went through surgery and had part of her skull replaced when a serious infection threatened her life. Two years later, the tumour was found to have regrown and Kelly Ann had radiotherapy and chemotherapy.

I don’t suppose there is ever a “good” time to be told you have a serious illness. The news that I had a brain tumour came just after I moved to Aberdeenshire to take up a dream job as a professional groom at a yard producing show jumpers.

My husband Kevin’s job as a lorry driver took him away a lot. I was busy, looking after around 15 horses every day, driving them to competitions, and looking after my own mare Aliyana, a wedding present from Kevin. 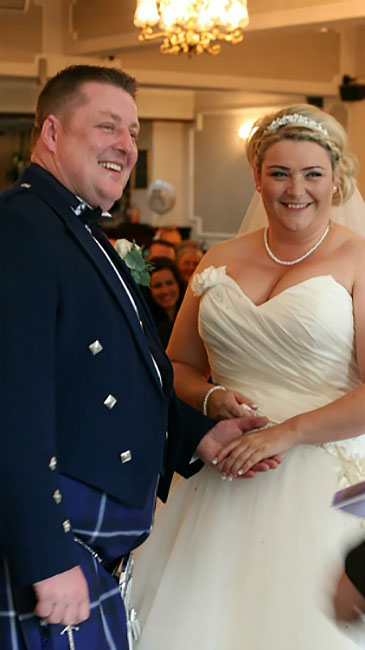 I would often be working 8am – 5pm at the yard and, by the time I had tended to my own horse as well, it would be 9pm before I got home. An Irish sports horse, Aliyana was four years old when I first got her. She’s now 11 and, over the years, we have forged an unbreakable bond.

In a way, my brain tumour story is inextricably linked to her and, along with Kevin, she is the one I am determined to live for. We competed in our first ever dressage competition just weeks before I was diagnosed in October 2015. There was a moment during the test in which I felt my brain had frozen and I just forgot everything, but despite this we came first and I was ecstatic.

Although I had been feeling tired and was becoming forgetful, nothing could prepare me for the shock that was to come. Within days of the competition I had a seizure and the next thing I was aware of was coming round in an ambulance as we headed towards Aberdeen Royal Infirmary.

“My speech was slurred, my face had started to droop and my left side was lifeless. Despite this, I was discharged and told to go and get an out-of-hours appointment or see my GP when I had ‘sobered up.’ It was outrageous, I hadn’t had a drink for weeks and weeks.”

The next day I had a full convulsive seizure. This time, Kevin wasn’t there to come to my rescue, but I managed to contact my sister-in-law who lived over the road. I was prescribed the anti-epilepsy drug Keppra. After that I was back and forwards to the GP and, as Kevin needed to get back to work, I moved 200 miles back to be with my parents in West Lothian.

Staying with my parents meant that it was about five or six weeks before I saw Aliyana again, but when they took me to her field, it was amazing. She galloped over and immediately started to sniff the right side of my head where the tumour was.

Things were clearly not right; I was having 14 or 15 seizures a day which were always preceded by a horrible metallic taste and smell.

Eventually, I was admitted to St John’s Hospital, Livingston, where I was given the news that I had a brain tumour which was later identified as a slow-growing oligodendroglioma.

I was advised that the best course of treatment was surgery, a procedure called an awake craniotomy in which I would be woken up after my skull had been opened. This meant that by talking to me and asking me to follow basic instructions they could ensure as much of the diseased tissue could be removed while minimising damage to the healthy areas.

“My neurosurgeon warned me that there was a big chance I would be left unable to walk or talk, but I told him that couldn’t happen because I have a horse and had to be able to ride.” 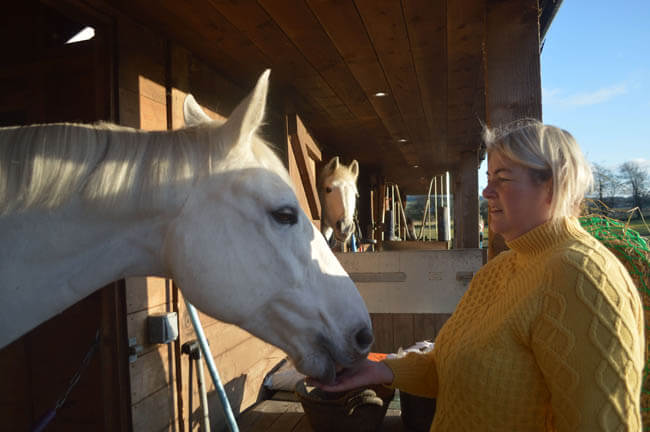 I can remember very clearly being brought round while I was on the operating table. I talked about my horse and got cross with the nurse when she repeatedly mispronounced Aliyana’s name. At first, I started to recover well, but things took a turn for the worse when I contracted a serious infection.

I was back in hospital just before Christmas. It didn’t help that Kevin was away although there was little choice but to go ahead with surgery. As I baulked at signing the consent forms, I was given the stark news that, without another operation, I would probably die within 24 hours.

I was devastated and there was worse to come. In order to get rid of the infection which was threatening my life, a piece of skull was removed from the side of my head. There was no other option and I came out of surgery with a hole in my head which was covered in surgical tape with the words “no bone” written across it in marker pen.

The flap of bone was eventually replaced with a special type of plastic which was made in the United States. Just five weeks after the procedure I was up and walking and at the Royal Highland Show, an event I attend every year, and was determined that a brain tumour wasn’t going to mean I missed out.

“My bond with Aliyana made me determined to recover as quickly as possible. Doctors had told me I wouldn’t be able to ride for a year, but I was actually back in the saddle after just seven months.”

I trusted Aliyana would look after me and, although I felt a bit apprehensive at first, I have found she always seems to know when I am tired and works extra hard for me. She even knows when I am having a good day. 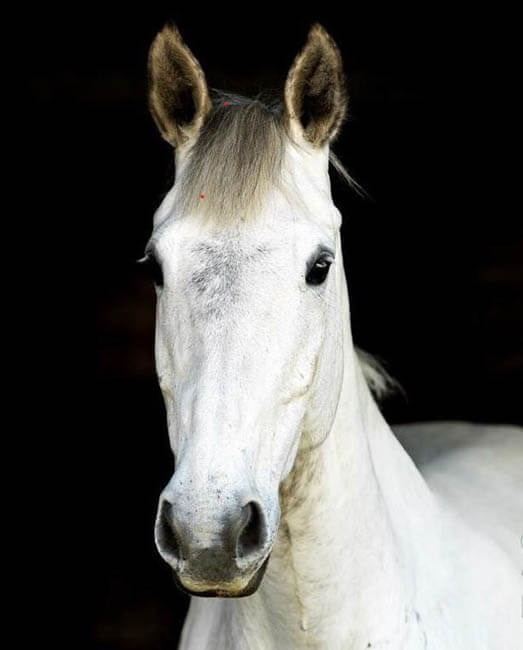 By October, I was well enough to compete again on Aliyana. It felt quite scary and, although it didn’t go as well as I had hoped, it was a big achievement for me.

A scan in December 2016 showed there was no regrowth of the tumour, which was a lovely Christmas present, but the following August I knew something was wrong and went back to see the neurologist. A scan revealed that the tumour had grown back. It was obviously the worst news and even more scary when the treatment suggested was radiotherapy and chemotherapy. I had seen the effects of these treatments on my grandparents who had both died, albeit with different cancers. 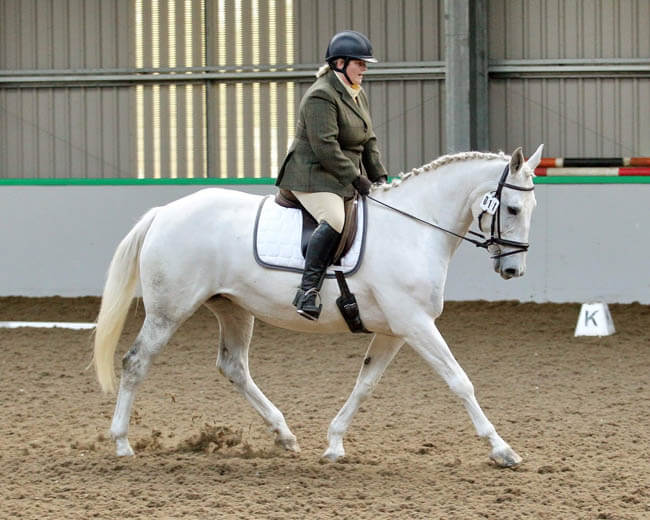 I wasn’t bothered about losing my hair, but spent a long while talking to my family and making my mind up about the way forward. Eventually, I decided to go ahead and had 30 sessions of radiotherapy. However, I only managed four cycles of chemotherapy, which I started in April 2019, because my body had a reaction. I am now on a break and am due another scan in the New Year to see if I need any more chemo – I have been told I can’t have any more radiotherapy.

Now 42, the uncertainty of my future makes it very difficult for my mental health. I am having to take things very slowly. Added to that, because I am not allowed to drive, I have to rely on friends giving me lifts, including to the stables.

I am still trying to compete in dressage competitions but find it very difficult as I get brain fog and can’t always remember my tests. To me that doesn’t matter as the important thing is that I have made an effort to attend. I don’t care if I win a rosette or not, because in my eyes I am a winner – I’m winning at life after being told I may not walk or talk again. 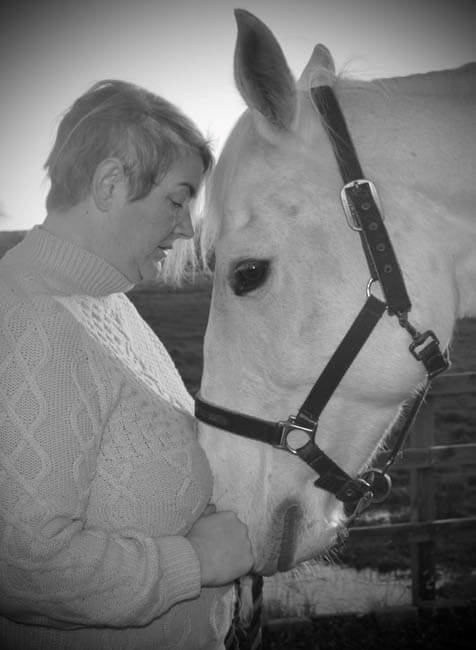 I have good days and bad days, but when I am with my horse, I forget all about my health. Aliyana is my best therapy.

“I’m determined to make the most of whatever the future holds for me and, with Kevin and my beloved horse, I know I can put on a brave face and make the best of every day.” 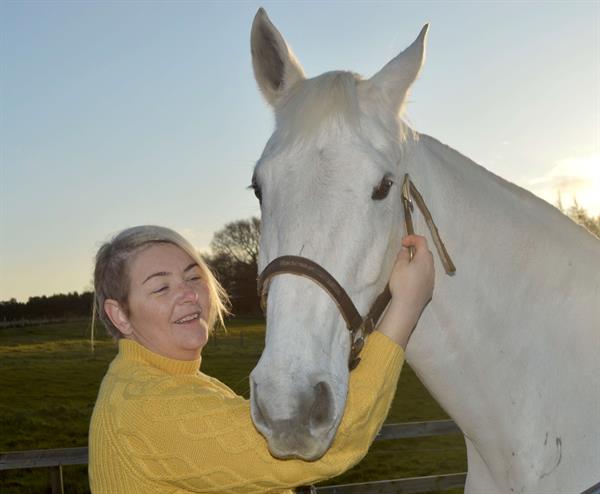