Karen Eggleston’s grade 1 olfactory groove meningioma was discovered after she suffered a seizure at home and went into cardiac arrest in June 2020, flatlining for about 10 minutes. She had been exhibiting strange behaviour for some time but the shocking discovery was made whilst brain scans were being carried out to check for any damage her brain had sustained during the 10 minutes she was without oxygen. When she came to in hospital a week after having a craniotomy, she had no memory of the seven months leading up to her collapse, including the emergence of the COVID-19 pandemic, and many other things in the months prior, such as the UK’s change of prime minister. The 50-year-old organisational development consultant, from Westerham in Kent, also found herself completely blind in her left eye and visually impaired in her right eye. She went on to have radiotherapy and is now being monitored with annual scans having been given the ‘all-clear’.

In November 2018 I had a lot going on in my job. I work in human resources (HR), which can get quite intense at the best of times but there had been a few changes and I was getting stressed as a result, which is what I put everything down to. By February 2019 I was not very well at all; I was struggling to get up in the mornings and feeling really unmotivated. It was then that I went up to Edinburgh to watch the Rugby Six Nations and had what I now know to be a small seizure during the game. After the whole stadium stopped spinning, I decided enough was enough and I couldn’t go back to work so I was signed off sick with stress.

“Months later I was still no better, with my symptoms actually increasing; I was suffering from upset stomachs, constantly sleeping, not eating very much and I wasn’t able to coordinate myself.”

In early November I remember going to bed not feeling very well after having had an argument with my then partner of 10 years and was roused by a voice saying ‘take it easy, you’ve had a head trauma’. I thought I was waking up in my own bed and hadn’t even opened my eyes when I heard the voice come through. I’ve always been pretty clumsy and thought ‘oh no, what have I fallen over now?’ To my surprise it was 10 June 2020. I was in Kings College Hospital, London, and really didn’t know what was going on. My eyesight had been affected and I was struggling to see and finding everything really confusing. I had a complete memory blank of the previous seven months, no recollection at all. It was like waking up at the start of a John Wyndham novel in the middle of a pandemic I knew nothing about, with everyone coming at me with swab sticks and wearing masks, and my head completely shaved having previously had really long hair.

“People refer to life events as feeling like they’ve had the carpet ripped out from under them; well I’d lost the carpet, the floor and everything else beneath me.”

I felt like I’d gone to bed feeling sick and woken up the next morning feeling OK, but it was a week after I’d had a craniotomy and many months since my last memory. I remember I had been sleeping a lot; I would go to bed one day and wake up three or four days later. I also wasn’t eating and had lost about two stone in weight and was uncoordinated, having lost the use of the left side of my body and been unable to see out of my left eye. On 2 June 2020, the day my tumour was discovered, I was still being treated for stress and there had been attempts made to section me. My psychiatrist came over and after seeing me standing naked in my living room and not being able to get in, he rang my daughter, Heather, to tell her he was worried and see if she could come over.

“The police had already been out on several occasions because of the smell emanating from my property as a result of the cat I have that I wasn’t taking care of.” 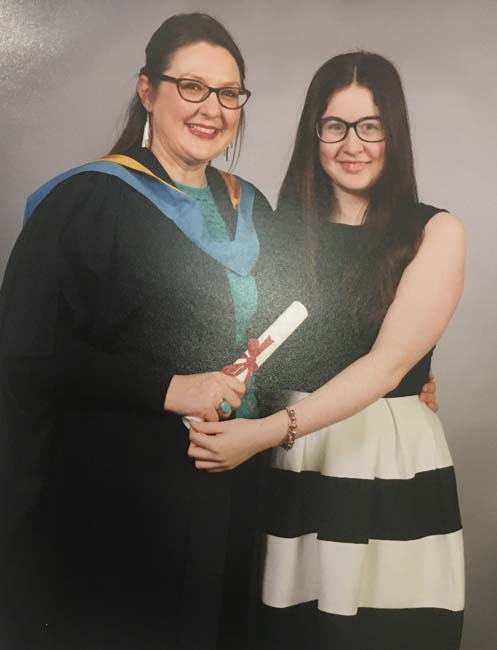 When Heather arrived with her boyfriend and his mum, they found me collapsed on my living room floor. They called an ambulance and, when I came round, I was talking quite lucidly for about half an hour before I had another seizure and went into cardiac arrest, flatlining for about 10 minutes. It was when they gave me a brain scan at the Princess Royal University Hospital, in Orpington, to see what damage flatlining for that long had done, that they found my tumour. I was immediately transferred to Kings College and had brain surgery the following day, after which I experienced confusion and hallucinations but I remember being in hospital well because I was tied to the bed as a precaution; apparently someone who had brain surgery two weeks earlier had thrown themself out of a window. I had a catheter in, but I didn’t know why and I wasn’t aware I’d been in intensive care or on a ventilator. I did have a sore chest from the cardiac massage I’d been given, but of course I didn’t understand that at the time either.

“It all sounds so bizarre now and if somebody told me this story I wouldn’t believe it, but this really happened to me.” 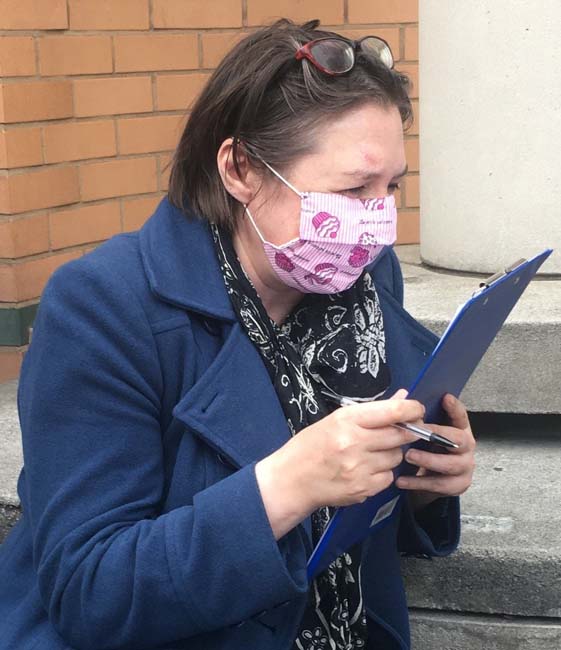 I had suffered for around 10 years with optical migraines and sinus problems and remember asking my doctor, about seven years ago, if I could have a brain tumour but he told me they’re very rare and I shouldn’t worry about that. I’m now registered blind, with no sight in my left eye and impaired vision in my right eye and I do wonder if my sight could have been saved if my tumour was detected earlier, but hindsight is a beautiful thing and that obviously was not my fate. I now know my grade 1 olfactory groove meningioma was mostly located around my nasal cavity and around the part of my brain that controls memory, which is what’s thought to be responsible for my memory loss. There was also a bit of it wrapped around my optic nerve where it was attached to my brain, damaging my sight as it grew. The only way to take that out was to remove my eye and they didn’t know I had lost my sight at the time so left it in, but they think removing the other part cut off the tumour’s blood supply and, with the three radiotherapy sessions I had after, it seems it’s disappeared. I was given the ‘all-clear’ just before Christmas 2021 which was a great present.

“I just have to keep on top of things with regular check-ups and have now had my six-monthly scans moved to annual ones.” 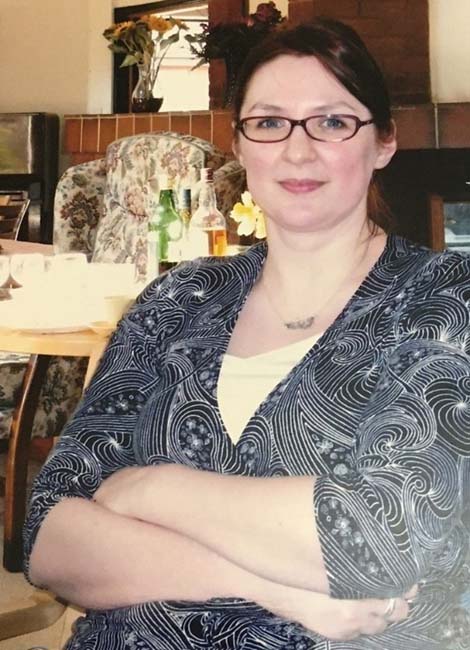 I do struggle, though. I have good days and bad days. Getting through the surgery was the hard bit but now I actually have to survive. I’ve got people depending on me, those who have supported me throughout all this and if I give up, what thanks does that give to them? My biggest heartbreak was finding out my fiancé didn’t even want to talk to me. It’s a shock because my behaviour came out of the blue but I’ve had to go through the grief of a relationship break-up as well as everything else, without knowing what happened.

“The personality change and how it’s impacted my life is hard to accept; all I can do is say I’m sorry for my behaviour during that time and explain that it wasn’t me, it was my brain tumour.” 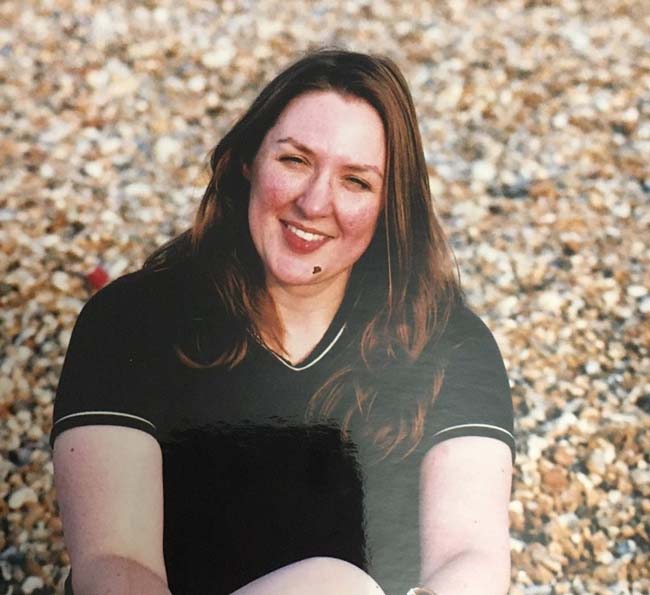 With what people have told me and the fragments of memory I have I can piece most things together, but I really struggled with my mental health after coming out of hospital and had a few breakdowns. Going to bed thinking you’re stressed and waking up seven months later with the whole world having changed is hard, and there’s a lot of other gaps in my memory from before that too. I don’t even remember Boris Johnson becoming prime minister and never saw that coming. Life is really tough; I wake up every day and just concentrate on getting through that day. 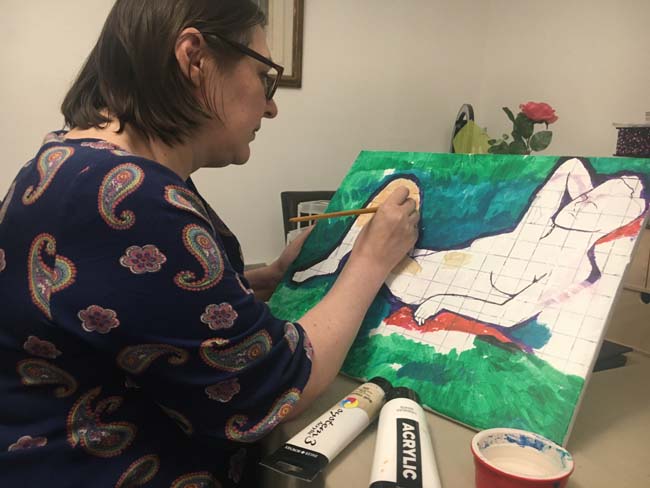 “I studied art at university and that’s always been a hobby of mine but I’m having to learn to paint differently.”

Thankfully I do know a few different techniques but I’ll never be as good as I was. I used to love driving too, but I’ll never be able to do that again. I was a very confident person but my confidence has been shattered. I have to concentrate a lot on where to put my feet so that I don’t fall over. I do keep trying but I’m not the same person. I’ve been working with the Kent Association for the Blind and they’ve given me a stick, partly to help me on uneven ground but also to alert others to the fact I’m visually impaired. I also started working again in June 2021. I took a temporary contract for three months but returned to my full-time job in September. It’s been a bit strange having had two years off but you never forget the basics. 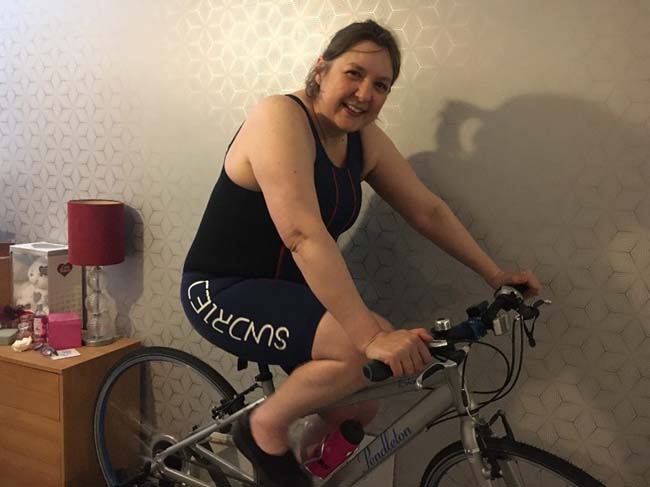 My dad, John, was the one who found Brain Tumour Research online whilst doing a whole world of research during the time I was in hospital. From that I found out about the charity’s Walk of Hope and took part in that, raising £75 and then at the beginning of December I held a raffle at the Biggin Hill Christmas Fair, which raised £200.

“I want to do what I can to help raise awareness of brain tumours as well as raise funds towards researching the disease so fewer people will have to face having their lives turned upside down, like mine.” 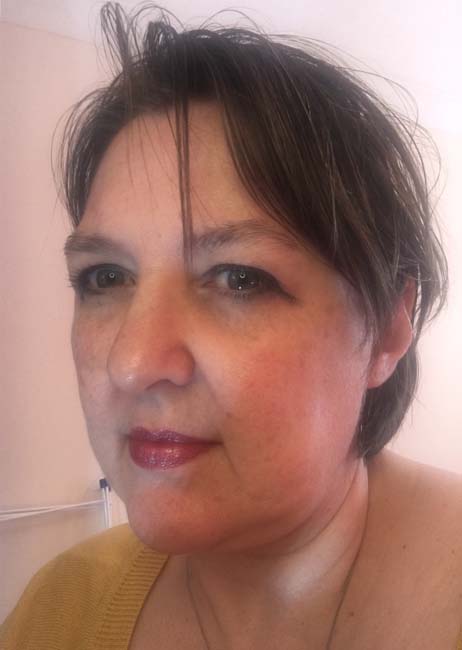