When 24-year-old student Julie Carter went for a routine eye test she didn’t expect them to find anything wrong. However, tests revealed she had a low-grade brain tumour and would need an operation to help control it. Now 11 years on since her diagnosis, she is still living with the tumour but is determined not to let it affect her life.

“I thought I was going to come out of the opticians with a lovely new pair of glasses, but instead I was referred to the eye clinic at Leeds General Infirmary. Something had been found during my field vision test and I had to see a specialist. That day in 2006 my life took a different course.”

I grew up in a small village in County Antrim in Northern Ireland with my parents, Susan and Charles, and my younger brother Peter. My Mum is a Speech and Drama teacher, so my childhood was filled with singing, dancing and drama. I loved being on stage and taking part in productions such as Annie and Little Shop of Horrors in the Lyric Theatre, Belfast. It was a really happy time in my life. I have a great relationship with my parents and when I chose to move to Leeds to attend university, it was a big step for us all.

My degree in event management was a four-year sandwich course and I spent my second year placement in London, working at an events company. It was my favourite year at university, as it was then I realised I loved event management and it was definitely the right career for me. I met Ben, who is now my husband, when I returned to Leeds at the beginning of my third year. He was in the year above me and on the same course, so we weren’t stuck for conversation!

The last year of university is tough for any student as you have more coursework and usually a 10,000-word dissertation to write. I remember having to do lots of reading and spent many hours studying. My housemates had always taken the mickey out of me for holding my textbooks five inches from my face and thought I needed glasses. As students we were entitled to free eye exams and with a few months left of our final year we chose to take advantage of this and booked eye tests.

I thought I was going to come out of the opticians with a lovely new pair of glasses, but instead I was referred to the eye clinic at Leeds General Infirmary. Something had been found during my field vision test and I had to see to a specialist. That day in 2006 my life took a different course.

Over the next few months, while I tried to finish my degree, I had to undergo several tests and CT scans to find out what was interfering with my sight. The doctors believed that I had a cyst on my brain and wanted to operate to see if they could remove it. I held off having surgery until after my exams and chose to have the operation at the Royal Victoria Hospital in Belfast, so I could recover at my parents’ house. I hate hospitals, so I was really pleased my mum came with me and waited while I had my operation. Waking up in that hospital room was awful but spotting my mum next to my bed, asleep in a chair, was instantly reassuring.

The consultant came in and bluntly told us they hadn’t found a cyst, but a pilomyxoid astrocytoma (PMA) brain tumour, which was sitting on my pituitary gland and couldn’t be removed. I was still very drowsy from medication, so the word tumour didn’t sink in. My Mum was understandably very upset and rushed out to call Dad, who then called Ben to let him know what was happening. The consultant said they were confident that the tumour was low-grade, but explained I would need to go in for regular scans to keep an eye on it. I just had to wait and do nothing.

Several years passed and I didn’t experience any side effects from the tumour and went about furthering my career in events management and setting up a life with Ben. We married in 2011 in Woburn, Bedfordshire, and everything seemed to be going well.

In November 2014, just before we were about to move into our new home in Newport Pagnell, I began to feel unwell with what we thought was just a virus. Ben was away on business so asked his mum and dad to come and pick me up. I had been sick several times and he wanted me to be somewhere safe where someone could keep an eye on me. His parents brought me back to their house in St Albans and I went straight to bed, feeling awful, but thinking whatever it was would pass. He was right to call them as a few days later I had a seizure and was taken by ambulance to Watford Hospital. I was later transferred to the National Hospital for Neurology and Neurosurgery in Queen Square, London.

Tests revealed it was hydrocephalus, a build-up of fluid on my brain and I would need to have a shunt fitted to relieve the pressure. I was only in hospital for around two weeks after the surgery, but my recovery after that was long and uncomfortable. My family, friends and Ben tried to come to London and be with me during that time as much as they could. Looking back, I think the whole experience brought everyone closer together.

I thought that was it, but it wasn’t. In 2015 we were due to fly home after spending Christmas in Ireland with my family, when I started vomiting at the airport. Ben immediately called my parents to come back and get us, as I was starting to not make sense and was slurring my words. I was immediately taken back to the Royal Victoria Hospital, where it was found that the tumour was bleeding and a second shunt had to be fitted.

I ended up staying in Ireland for another month while I recovered, with Ben flying back and forth to spend time with me. The doctors advised me not to fly because of the cabin pressure, so in the end my Dad and I got the ferry over. Ben and his dad drove over 360-miles to Stranraer, in Scotland to pick me up. It was such a good feeling seeing him and being able to go back to our home in Buckinghamshire.

A few months later in March 2016, I became unwell again and was taken back to London to have another shunt fitted to drain fluid from the other side of my brain, which was a result of the hydrocephalus. Recovery this time was a lot quicker and I was in hospital for only a week.

Since my diagnosis 11 years ago I haven’t experienced any more seizures or big side effects brought on by the tumour, but it has impacted how I live my life. When you are living with a brain tumour, it isn’t something you can just pretend isn’t there, it is often at the back of my mind. I’m naturally a very positive person and try to look at every hurdle as something to overcome. I can’t drive, but I find other means to travel in order to continue my job as a freelance events manager. I can sometimes be forgetful and have moments where I’m extremely tired and need to take it easy, but otherwise I’m a normal 34-year-old.

Although I cannot control the tumour, I do have control over how I live my life and will continue to do that with a positive attitude and a smile on my face. 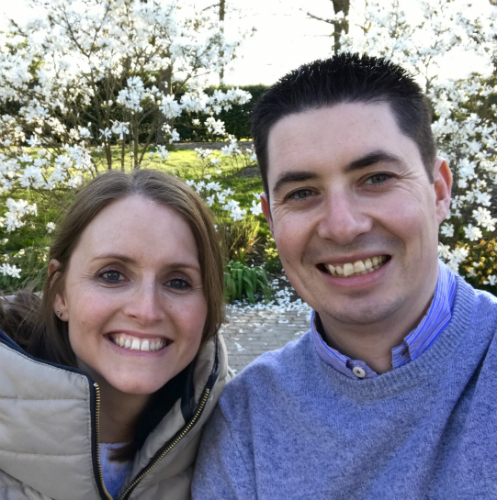