It took doctors five years to diagnose Josie with a grade 2 astrocytoma brain tumour.  Four years later and a year after graduating from Medical School, Josie faced the devastating news that the tumour had become malignant.  After two craniotomies, chemo and radiotherapy, and a round-the-UK sailing challenge to raise awareness, Josie, has had clear scans for the last five years.  Now the mother of two young girls, Josie is determined to live life to the full for as long as she can.

“I am very conscious of how little is known about brain tumours and how there needs to be a huge amount more research into what causes them, how to prevent them and, of course, how to treat them.”
I started having problems from about the age of sixteen – unexplained headaches and “vagueness” – and was seen by various doctors who diagnosed either migraine or stress.  These problems continued throughout my time at university, culminating in a grand-mal seizure in 2004 at the age of 21 during a six week wind-surfing holiday in Southern Spain.  A CT scan confirmed the presence of a brain tumour, later confirmed as a slow-growing astrocytoma.

For a long time I was very angry, blaming other people for the length of time the tumour had gone undiagnosed.  I came to realise, however, that all the time my condition had gone undetected, I had successfully managed to get through several years of a degree course in Medicine at Cardiff University and, as the tumour was low-grade, it would probably have been a case of “watch and wait” anyway.

Meanwhile, in 2003 while I was on a year out from Cardiff University to do an intercalated degree in Exercise Science at Bangor University, I met Roger at the windsurfing club.  I found windsurfing was becoming quite a struggle by then because of my left-sided weakness, so Roger introduced me to another of his passions – sailing dinghies.  I got really hooked, both on the sport and Roger!  The two of us went on to get married in July 2007.

In 2005 I underwent my first “wide-awake” craniotomy to remove as much of the tumour as was possible under the auspices of world-renowned neurosurgeon Henry Marsh.  A year later my world came crashing down again when a scan revealed that the tumour had grown back, necessitating a further operation.

Having completed my degree in 2007, I started work as a junior doctor at Norfolk & Norwich University Hospital and my life seemed to be very much back to normal, but in 2008 I was shocked to discover from a routine scan that the tumour had grown back yet again.  Worse than that, a subsequent biopsy revealed that it had progressed to a grade 4, which was devastating news, turning my world upside down.  It was earth-shattering being given a prognosis of just 12 to 15 months and I remember thinking that I didn’t know whether I was even going to see my next birthday.

Chemotherapy and radiotherapy followed and I was very frustrated to find that I became very poorly whilst undergoing the radiotherapy.  I had been given to understand that some people still managed to carry on working whilst on this treatment, but there was no way I could do the same.

Then a big abscess was found where the tumour had been so I had yet another operation.  Next the bone flap became rotten so a portion of my skull had to be removed.  I went through a stage of feeling like I would never get back to normal, yet thankfully I did.

Over Christmas 2008, I was feeling very low, so Roger and I started to think about what I could do when I felt better and we hit upon the idea of sailing 2,000 miles around Britain to raise awareness of the plight of brain tumour patients while at the same time fundraising for the charity Brain Tumour Research, as well as the Big C cancer centre at my local hospital in Norwich.

It was a great to have a challenge to focus on – not least that I had to learn to sail a yacht, having only sailed dinghies so far.  I am a real outdoor enthusiast, having grown up in Cornwall where I discovered wind-surfing.  I had also climbed Mount Kilimanjaro with the university’s Duke of Edinburgh Society and, of course, I was bitten by the sailing bug, when I met Roger, himself a devotee.

We bought a trusty Contessa 32, called Nordlys, in March 2009 and in May 2010, Roger and I set out in her from Fox’s Marina in Ipswich and sailed anti-clockwise round Britain, calling at ports and marinas around the UK where we met with many people who had also been touched by brain tumours.  Nearly four months later, we arrived home and by this time I already knew I was pregnant, having discovered that morning sickness combined with rough seas wasn’t a good combination!

The circumnavigation of Britain raised more than £13,000 for Brain Tumour Research and a further £5,000 for the Big C.  It was a great feeling knowing that our fundraising was giving hope to others in the future.

Little Edie was born in March 2011 and then we had Harriet in October 2013.  Meanwhile, I have continued with my medical career in between maternity leaves and am now settled into my chosen path of anaesthetics, working at the James Paget Hospital in Great Yarmouth.

This year Roger and I decided it was time to do another big fundraiser so we put in for ballot places to run the London Marathon in April 2016.  Sadly, Roger wasn’t successful, but I was!  I still have a limp so my race won’t be the fastest or prettiest and I won’t be running all the way, but I hope to be able to raise a sizeable amount to sponsor research.  I am very conscious of how little is known about brain tumours and how there needs to be a huge amount more research into what causes them, how to prevent them and, of course, how to treat them.

Whether malignant or benign, both patients and carers are living with a time bomb.  Brain tumours can affect anyone.  Living with an incurable disease is extremely difficult and we hope that the funding we raise for Brain Tumour Research will give hope to others in the future. 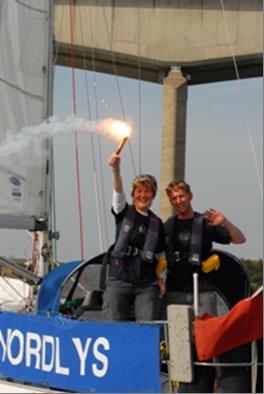