John had an operation to remove his brain tumour in 2004 and ever since, his scans have revealed no evident tumour.  He feels very lucky, not only to have survived, but to have been able to rebuild his life and return to work, albeit not in the same capacity as before.
I was diagnosed in November 2004.  It was all very sudden.  Looking back I suppose there were some indications like a lack of concentration, tiredness and stress, but nothing really significant.

I had three weeks in a new job, which was quite tiring and stressful because I needed to travel regularly from our home in the south-west of England up to the shipyards in Newcastle and Glasgow.  Then I took the family, including our two boys, who were 11 and 8 years old at the time, up to Scotland for half-term.  Once there I started to get bad headaches, felt quite unwell and also started being sick so I went to see a GP who diagnosed sinusitis.  A couple of days later I saw another GP as I was still unwell and by this stage was struggling with words.  I was referred to the local hospital for a CT scan.

The mood in the hospital instantly changed when I had my scan.  There was something there, but it was not within the hospital’s remit to act upon it.  This was obviously quite a shock, but the first thing I wanted to do was get my family back home.  I was referred to Frenchay Hospital in Bristol who had a bed for me as long as I could get down there the next day.  My wife went into auto-mode as carer, (she was to reveal hidden resources in all the most critical stages of my brain tumour journey) and her brothers were there to help too.  In many ways I had the easy job as everyone else was running around for me.  And the steroids I was being given helped to ease the headaches.

Having arrived at Frenchay Hospital I was keen to crack on with my diagnosis and we soon met my neurosurgeon, David Sandeman, who wanted to take one step at a time.  I had an MRI scan the next day, which confirmed the presence of a tumour, followed, a couple of days later, by a biopsy to narrow down the type of brain tumour I had from the huge range of possibilities.  Following this Mr Sandeman was able to look at the options for treatment.

I was very much hoping that my neurosurgeon would conclude that surgery was the most appropriate course of action because it felt like that would be doing something positive, rather than leaving it to “wait and see”.  The results took a while to come back with my tumour being diagnosed as an Astroblastoma.  I had surgery to remove as much of the tumour as was possible.  Incredibly the subsequent scan showed no evidence of the tumour being there, although I was warned that there could still be molecules present.  Thankfully, every scan since has shown the same – no tumour.

It was amazing to think that up until the previous Saturday morning I had known very little about brain tumours except having read about various famous people who had been diagnosed with or died from a brain tumour.  Suddenly I had been thrust into a completely new world in which I was to learn an awful lot.   My thirst for knowledge was probably aided by my technical background.

In some respects it was a privilege to have a brain tumour.  I met some wonderful people whom I would not have done so without it.  I was forced to look at my work / life balance and acquaintances suddenly became good friends (although in some cases good friends faded into the background).

I had a six week course of radiotherapy at the end of 2004 and beginning of 2005 and only started to feel tired and lose my hair after completing the treatment.  For someone in their 40s this wasn’t a problem.  I just shaved my hair off completely and now I don’t have to go to the hairdresser’s!

I have suffered some ill effects from the tumour and/or radiotherapy.  I had to learn to read again (I suspect this may have been exacerbated by the fact that I was probably an undiagnosed dyslexic) and I find that I am more prone to feeling sensitive, stressed and tired than before.

I negotiated to go back to work part-time and closer to home with the flexibility to work at home on my lap-top as well.  This is great as I now have a problem with my peripheral vision which means I am unable to drive.

My brain tumour has, not surprisingly, had an impact on our boys.  They don’t show it, but they are bound to worry.  We had a hic-cup last year when I had been working quite hard.  I was walking home in the sunshine and showed symptoms of a minor stroke.  I went by ambulance to A&E where the symptoms subsided very quickly.  It was probably stress-related and nothing more, but it brought back memories, particularly for the boys, which manifested itself in moods and further stress about GCSEs.

Brain tumours present a huge challenge as there are such a huge variety of them and they have such a range of effects on different individuals.  More research is desperately needed into understanding this type of cancer which kills more people under the age of 40 than any other.

I feel incredibly lucky not only to have survived, but also to have had the help and advice of Hammer Out.  Their understanding of and support for my hidden disability have been so appreciated not only by myself, but also by my wife as my principal carer. 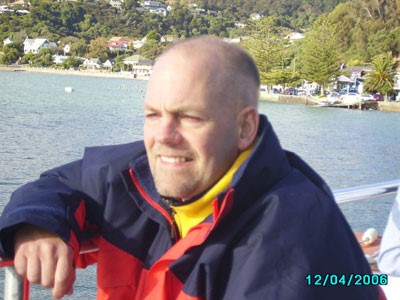