Jodie, 35, was diagnosed with a brain tumour and had surgery just before Christmas in 2016. Now, two years on from her diagnosis, she is celebrating a series of clear MRI scans, and is looking forward to a rather more relaxed Christmas with her partner Barry and their two daughters Ruby and Darcy.

“The positivity from my friends and family has helped me through the inevitable dark days and I’ve realised just how much I have to live for. I’m really looking forward to a stress-free Christmas; the past two years I’ve felt fraught with worry about my diagnosis and now, on the back of my positive scans, I think we’ll finally be able to relax and enjoy the day. It’s a very special time of year and I’m so grateful I’m here to share it with Barry and our girls.”

Christmas is always a time for reflection, which reminds me of how lucky I am. Looking back over a turbulent couple of years, I feel so proud that I, alongside my partner Barry and our two daughters Ruby and Darcy, have come so far and I’m hoping that this year’s festivities will be easier than the previous two years.

Last Christmas marked the first anniversary of my diagnosis and treatment for a brain tumour and, although I put on a brave face for my girls, it was always in the back of my mind. While I felt fortunate to be celebrating with my family, I couldn’t help but think of how differently things could have turned out.

It all began in October 2016, when I experienced a couple of nocturnal seizures. I don’t remember much of them – only waking up in St Helier Hospital – but they were scary for Barry, who had to call an ambulance in the middle of the night. We explained what happened to the medical staff and they were confident that I had epilepsy, but scheduled me in for an MRI scan ‘just in case’.

My mum had had lots of MRIs before and told me not to worry. When it came to getting the results one Saturday evening, she looked after the girls while Barry and I went to the appointment. We were planning to move out of Mum’s house and into our new home the following week, so I was eager to get the appointment over and done with.

I didn’t think much of the scan so, when we were told that there was a large mass growing in my brain, I was in utter disbelief. Barry comforted me in the consultant’s room, but deep down I feared the worst, and I sensed he did too. I couldn’t process the news and didn’t understand what it all meant. I didn’t know whether I was going to live or die and even considered writing a letter of goodbye to my family.

The doctor didn’t seem to know much more than us, so arranged for us to meet a specialist after the weekend. We put our plans to move out on hold and stayed at Mum’s to help us get by. I barely remember any of those days at all; I was in a daze. I just wanted answers to the endless questions littering my mind.

By the time we met the specialist, I had overcome the initial shock and could understand more about my diagnosis. We were reassured that, although my tumour was very large, it was almost certainly low-grade. I couldn’t fathom how I’d been able to function with the tumour, a meningioma, occupying such a massive space. We were told that it had probably been there for many years, and my brain had adapted to its growth. I wondered whether this could explain the migraines I’d been experiencing since my teenage years.

My doctor was keen to book me in for surgery and the operation took place just a week later. The tumour was removed during the six-hour procedure and I was discharged a couple of days later. Frustratingly, five days afterwards I experienced complications – an agonising pain in my head and my face started to swell. I was rushed back to St George’s and diagnosed with a bone flap infection; the part of my skull that was cut during surgery had become infected and I was prescribed a heavy dose of antibiotics to help me recover in hospital, where I stayed for another three weeks. Even after I’d left hospital a nurse came out to administer me antibiotics via a mid-line catheter in my skull.

I was very honest with 10-year-old Ruby and Darcy, five, and wasn’t afraid to tell them I had a brain tumour. From working as a teaching assistant in a school, I knew that the more truthful I was with them the more likely they were to accept everything, and I didn’t want them to think we were hiding things. I used illustrated books as I talked to them about my illness as I knew this would make it easier for them to understand. The hardest part was when I had a seizure in front of the girls, the first time they visited me in hospital. My arms were jerking and I wasn’t able to talk. I couldn’t guard them from what they saw.

I was desperate to be discharged, as I’d promised Ruby a party for her birthday on 20th December. Thankfully, I was well enough to leave hospital and move into our new home on the 17th and, although I was tired from the treatment, Ruby had a wonderful birthday. Christmas was special – we finally felt like things were on the up and had a chance to settle in after the move – but, naturally, my illness was still on my mind. Barry had been working very hard in the weeks leading up to the big day to ensure we could treat the kids to the presents they deserved. I’ve always loved getting into the festive spirit and, despite the set-backs, that year was no exception. It was the first time I felt like I was getting better and I couldn’t quite believe that, if I wound the clock back two months, I feared I wouldn’t be alive to see that day.

Things were still a bit strange for Ruby and Darcy as, having surrendered my driving licence when I was diagnosed, we had to use public transport and I couldn’t take them out as much as I wanted to. I longed for a sense of normality and routine and still needed an MRI every month in case my tumour or infection recurred.

Thankfully my scans came back clear, and now I don’t have to have another one for two years. Slowly, things have returned to normal. I was relieved to get behind the wheel again and eager to return to work at Avenue Primary Academy, in Sutton. I was inspired to develop my role as a teaching assistant and now specialise in social and emotional mental health. Having helped my children through my own illness, I felt I like I could offer a great deal of empathy and support.

My illness changed the way I look at life and, two years on from my diagnosis, I want to share my story to inspire others. The positivity from my friends and family has helped me through the inevitable dark days and I’ve realised just how much I have to live for.

I’m really looking forward to a stress-free Christmas; the past two years I’ve felt fraught with worry about my diagnosis and now, on the back of my positive scans, I think we’ll finally be able to relax and enjoy the day. It’s a very special time of year and I’m so grateful I’m here to share it with Barry and our girls. 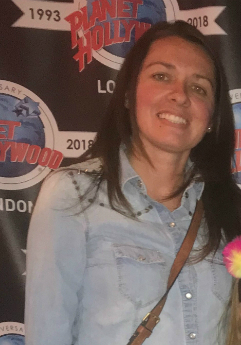