Jo struggled to receive the right help from her GP when, in her early 40s, she suffered from bouts of pain and dizziness. She opted to go private and was diagnosed with a haemangioblastoma in her cerebellum. Balancing her distrust of doctors and undergoing brain surgery was a paradoxical conundrum. The difficulties she experienced during and after surgery motivated her to write a book about her challenges and the importance of a positive attitude.

“I believe that I’m a much stronger person. I feel a lot of gratitude and don’t stress too much. I’m quite emotional and cry a lot but then I also think: why not? I went through a lot, I survived brain surgery, I have a lot to say.”

I have had quite a bad experience with doctors in the past (even as a child) and it has made me sceptical about mainstream medicine, so you can imagine how annoying it was when I started having my first symptoms. It all began one day in December 2015 when I was painting the ceiling. I had this shooting pain in my neck. I went to see an osteopath and a few other practitioners, not wanting to see a doctor just yet.

After a number of weeks, the pain was not disappearing and I often felt dizzy and wobbly. I decided to pay a visit to the GP who thought it had something to do with my ears or the blood flow to my neck. I was referred to the ENT (Ears, Nose and Throat) to check my ears and balance but they didn’t find anything wrong. They advised me to have physiotherapy and maybe to see a neck specialist or neurologist.

I found the doctors to be quite dismissive. They would often tell me to just take painkillers and were annoyed when I told them that would not resolve my problems. I wanted to know what caused my pain. Their rudeness, inability to listen and indifference made me feel so angry. I often ended up in tears after the consultation. I felt really hopeless.

I started doing physio to relieve the neck pain but noticed that it was making me dizzier. When I wobbled, my body went into fight-or-flight mode I and suffered from panic attacks. But the frequent visits to different GPs did not help.

It was only after I saw a third GP on the fourth visit at the end of March 2016 that I was finally referred to a neurologist. Unfortunately, the appointment wasn’t marked as urgent and it would be another nine weeks of waiting. Luckily, my mum helped and paid for me to see someone privately.

When the neurologist saw my drunk-like walking, he immediately sent me for an MRI. The machine was loud and it took so long but I was so exhausted that I didn’t care. We were told that the results would take at least a week so imagine the horror when the clinic called us an hour later to come back straight away.

When the doctor showed me the scan, I could instantly see the big lump on my brain. I remember asking him: ‘Is it the one that’s gonna kill me within the next three months?’ He sounded very reassuring, telling me he was 99% sure that it was low-grade. He stated that my tumour was ‘a good one’ to operate on but that it should be done as soon as possible.

It was a strange feeling because despite that horrible news and the shock, I was actually relieved that I finally had an answer. At times, I had felt like I was going crazy but the diagnosis explained my pain and dizziness. I also felt angry at my GP for not taking my symptoms seriously. I recall asking them many times if it could have been a brain tumour.

I had surgery on 18th May at St George’s Hospital, London, less than a month after my diagnosis. I remember before I went into theatre, I had these horrendous panic attacks. I was shaking like a leaf. Because my tumour was a haemangioblastoma in my cerebellum – at the back of my head – I needed to have a posterior fossa craniotomy (laying on my stomach while being operated).

The surgery lasted six hours and the surgeon managed to remove the whole tumour. After I woke up, my husband Dave stood next to my bed and kept repeating: ‘It’s all right. You are gonna be OK’. Even now, talking about it makes me really emotional.

I was discharged just two days after the operation. Before I went home, I was asked to see if my wobbliness improved when doing heel-to-toe walking in the hospital corridor. I managed a couple of steps without wobbling; I was so happy.

The aftermath wasn’t easy. I was still young, in my 40s with four children. I didn’t want to burden them with my tumour but it was difficult to live normally. I remember not telling my youngest son Roan, who was nine at that time, that I had a brain tumour to avoid scaring him too much.

Prior to the surgery I had worked for my husband’s business which is home-based. It was difficult for me to continue afterwards and he often had to help me out on the domestic front which has made things difficult financially.

The tumour that I had, haemangioblastoma, mostly occurs as part of a rare hereditary condition known as von Hippel-Lindau disease (VHL). I was worried that my children might be at risk or I could get further tumours, so I was offered a VHL genetic test. Thankfully, it came back negative; to my relief my tumour was not caused by this hereditary condition.

I suffered quite a bit psychologically after the operation. What really frustrated me was people saying: ‘Ohh, I wouldn’t even know you had surgery?’. But what they don’t see are all the hidden things such as problems with word recollection, the constant tiredness…

I asked for counselling but was told that they didn’t have anybody available. Before my diagnosis, I had been reading self-help and spiritual books for several years, but it was only when having my own serious health crisis did my own guidance kick in.

After my diagnosis, I decided I needed to write down my experiences, in the hope that explaining how I felt emotionally during various stages as well as the odd and worrying physical sensations, would support and help others who have been diagnosed with a brain tumour, or anyone needing brain surgery.  I also hoped it would inform their friends and family how they may feel and what might help.

That’s why I started writing my book It's All In My Head: How to Survive a Brain Tumour and Find Peace of Mind. It was published in August 2017. It wasn’t easy as I had a difficulty writing after the operation and made a lot of mistakes. Knowing all the obstacles that I had to overcome makes me feel really proud about finishing the book.

Alongside that, I also created a website and blog where I talk about some of the lifestyle and dietary changes that I’ve made. I started going to the park to exercise and I’ve been taking CBD oil and frankincense oil that help to relieve some pain. I’m also on other supplements such as turmeric golden paste and vitamin C.

I believe that I’m a much stronger person since my brain tumour diagnosis I feel a lot of gratitude and don’t stress too much. I’m quite emotional and cry a lot but then I also think: why not? I went through a lot, I survived brain surgery, I have a lot to say.

I hope that the total change in my belief system and the lessons I’ve learnt will help anyone going through a health crisis or supporting a patient of any kind – that you can either look for the negative, or find the positive in any situation. 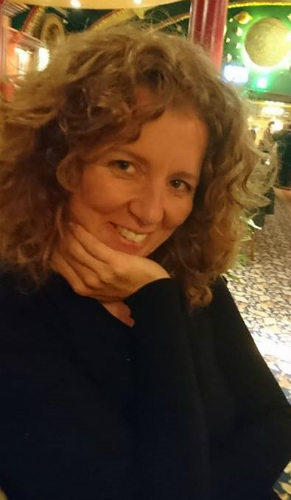