Originally from Cleveland, Tennessee in the USA, 33-year-old Jessica Fukuchi moved to the UK in 2018 and now calls Coventry in the West Midlands her home. Over the last 21 years, she has endured a total of 30 surgeries after being diagnosed with a low-grade astrocytoma when she was just 12. Now, Jessica wants to share her story to help others living with their own difficult diagnosis.

Having a brain tumour has encouraged me to take risks and live a fulfilled life which has led me to where I am today. Having travelled all around the globe, I have also lived in different places including Colorado, Brazil and now I call Coventry in the UK my home, after moving here in 2018 with my engineer husband Marcos, after he accepted a job in this part of the world. 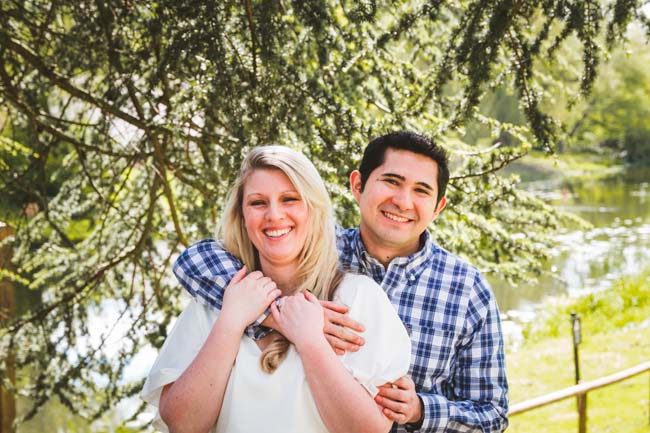 The pandemic has certainly encouraged me to want to share my story now, to help people understand the importance of research into brain tumours. It’s given me time to stop and think about the need for more parity of funding in this area of cancer research.

My last surgery was in January 2018 and although I don’t remember anything about it, I just remember feeling nervous. I was in the UK visiting Marcos, when my shunt malfunctioned, and I was then taken to University Hospital Coventry and Warwickshire (UHCW) where they fitted me with a new shunt. Since then, I have not needed any further surgeries which makes a change from the last 21 years. 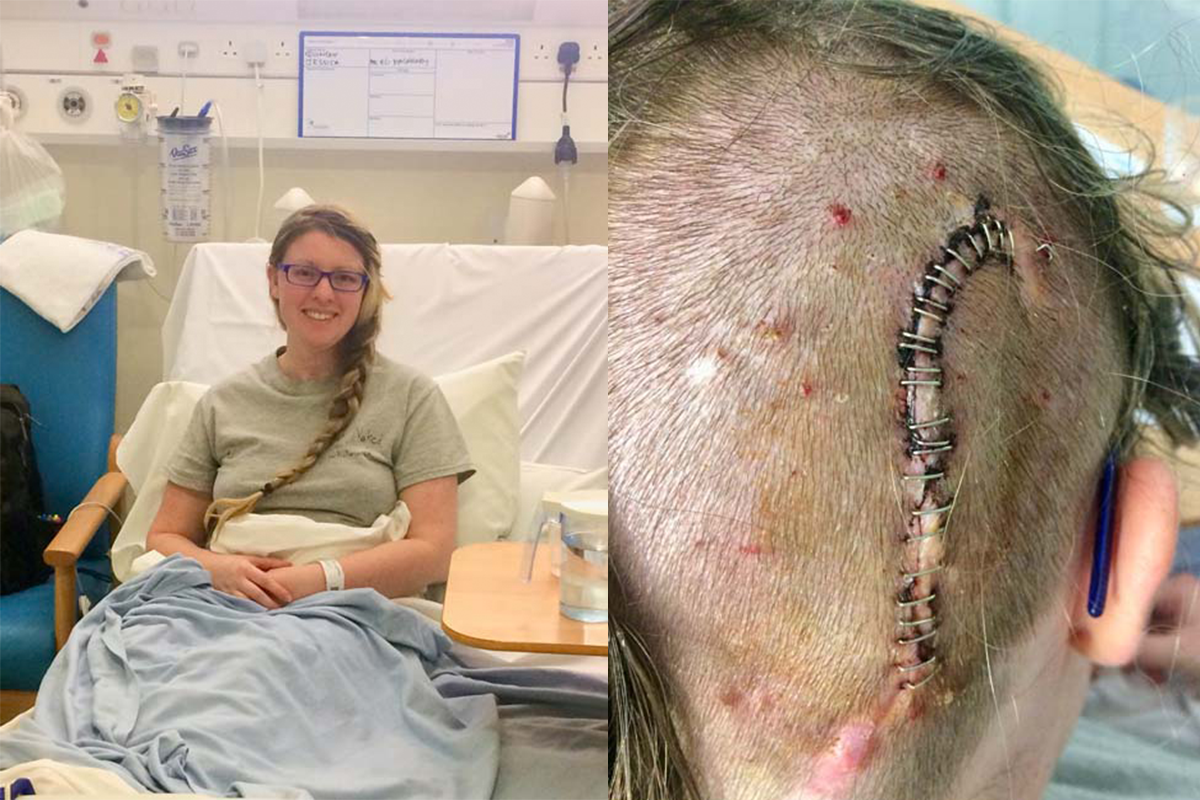 Before being diagnosed with a brain tumour, I began to experience symptoms while I was in 6th grade – I had really severe headaches. So, my mother took me to the doctors. However, because of my age, we felt the doctors did not take us seriously. Following many more doctor visits, the headaches persisted for the next year. It got so bad, to the point where I was starting to lose my vision. I would be walking around school and my sight would go black – I couldn’t see anything for about five to 10 seconds, but then my vision would come back. It stopped me in my tracks; I was petrified. 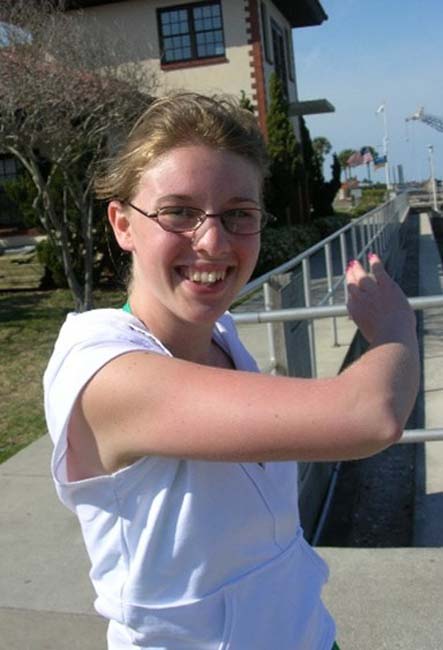 When this happened, I told my mom. While she was at her own medical appointment, she broke down crying and told her doctor what was going on with me. She said to the doctor: ‘I feel like my daughter is dying, but no one will listen to me’. The doctor suggested for us to see an optometrist who was a friend of hers, which we did. After getting my eyes dilated by the optometrist, she detected intense pressure behind my eyes and suggested that we had to get an MRI scan done that day. That’s the moment that we were finally being taken seriously and felt listened to.

“I then had an MRI, which revealed a brain tumour. Honestly, I felt that the optometrist, who was called Dr Nancy Blank, saved my life that day.”

In January 2001, when I was 13, I had my first operation to get fitted for a shunt to drain excess fluid, which had built up because of my brain tumour. In that same month, I had a further three operations to check the efficiency of the shunt. I also had a brain biopsy, which indicated that I have a low-grade astrocytoma, but due to the location of the tumour, removing it could have resulted in paralysis.

Receiving my diagnosis was scary and I didn’t fully understand what was going on at the time. But when it did start to sink in that ‘I have a brain tumour’, I was at a family doctor’s appointment. Coming to this realisation, I felt that I was about to start crying, so in order to avoid my family seeing me get upset, because I don’t typically like anyone to feel bad for me, I took myself to the bathroom and started crying – it was the release I needed.

Up until 2018, all of my procedures were done in America. Growing up, there were times that my family almost lost our home because the medical bills were so expensive.

Fortunately, my tumour has remained stable since my diagnosis; however, it is the shunts that have given me the most problems. I’ve had to endure 30 brain surgeries in 21 years since being diagnosed with a brain tumour. My family and I found ourselves running back and forth to the hospital at times because of the ‘shunt malfunction’ symptoms I often experienced. The symptoms generally consisted of intense headaches, lethargy, confusion, nausea and vomiting.

The longest I have been without surgery since my diagnosis was seven years from 2005 to 2012. In 2005 I was supposed to participate in a beauty pageant while I was a Junior in 11th grade, however, I had to drop out because I was having another shunt malfunction. 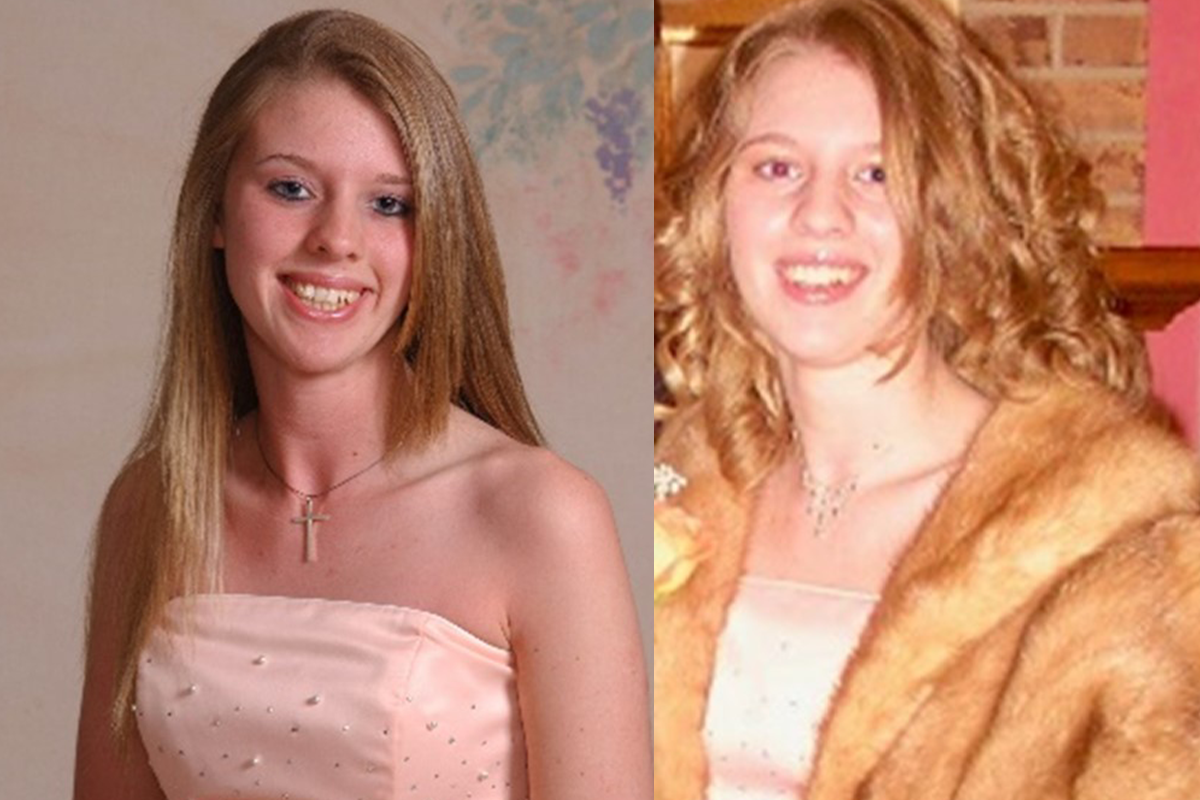 In 2012 when I was 24, I felt like I could really start enjoying life – and start living life to the fullest. So, I made the decision to travel. I packed my bags and filled my car with all my necessary items and moved to Colorado – it was then that I felt like I was really living the life I had wanted to for so long. 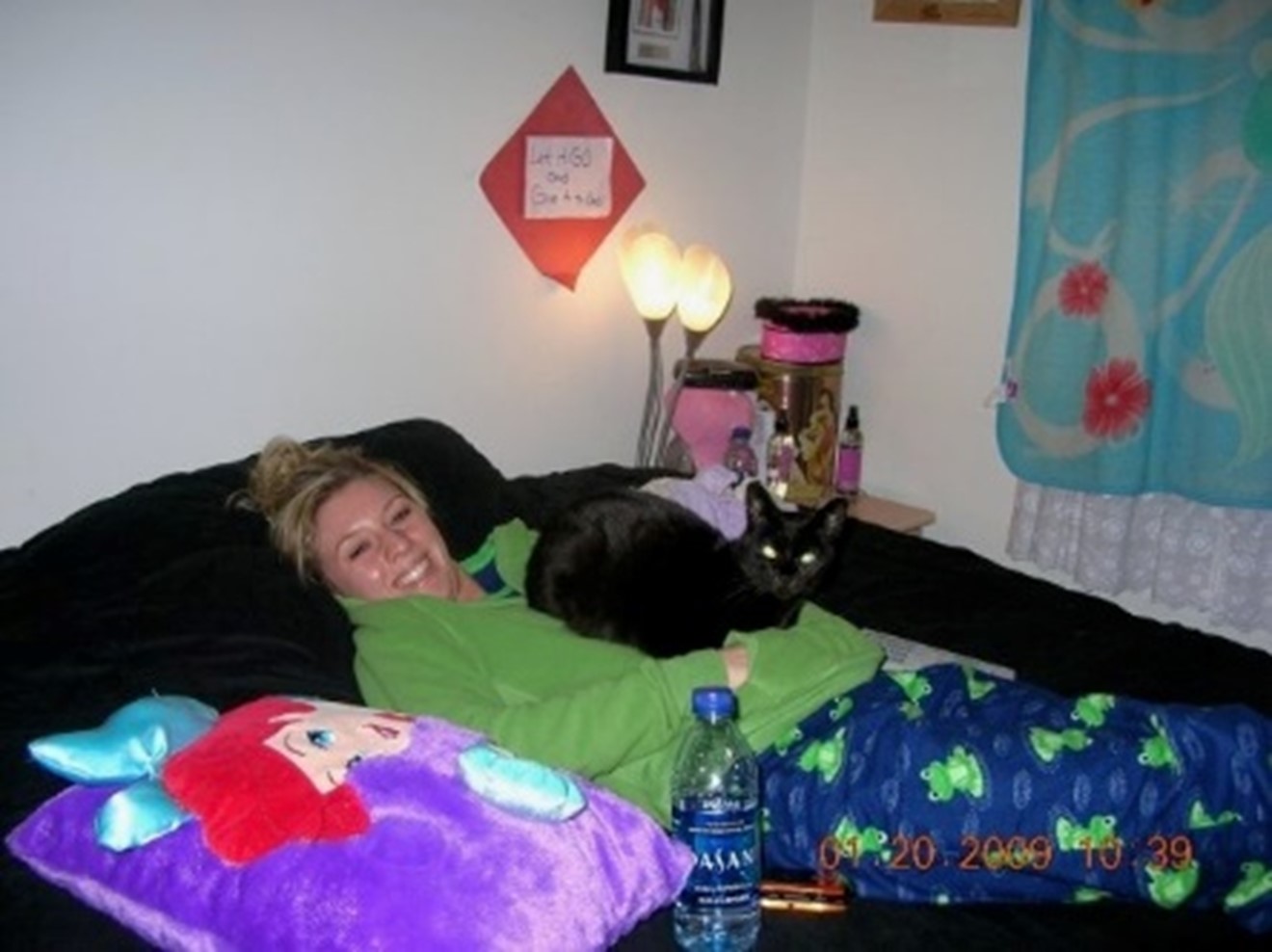 My two decades of living with a brain tumour have resulted in me being fitted with different shunts because they didn’t work properly. One shunt in particular could be controlled by a magnet outside my head which adjusted the settings. At the time, I thought it was my dream shunt that I had waited for for so long. However, when the shunt was not working at its best, my doctors constantly had to adjust the settings using a magnet on the outside of my head. When that didn’t work the doctors needed to do surgery to swap and change parts of the shunt. It got to the point where it was complicated and very technical, and I would have to wait a few weeks to see if the problem was fixed. 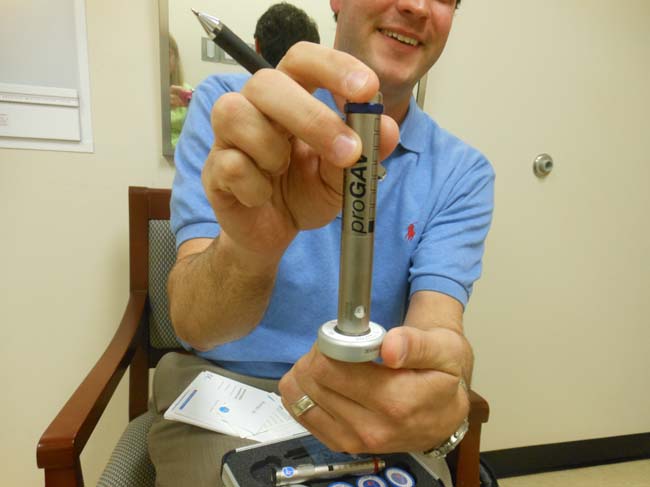 My last shunt malfunction was in 2018, just before I made the permanent move to the UK. Since then, I started my Master’s in Multiplatform and Mobile Journalism at Birmingham City University and I graduated last year with a postgraduate degree.

Throughout my brain tumour journey, I have realised the importance of scientific research and how underfunded it is for brain tumour patients. This is why I am pleased to support the charity in its mission to increase the UK investment in brain tumour research. During the month of February 2022, I took part in the 10,000 steps a day challenge and will continue to raise awareness for a cause that is so close to my heart. 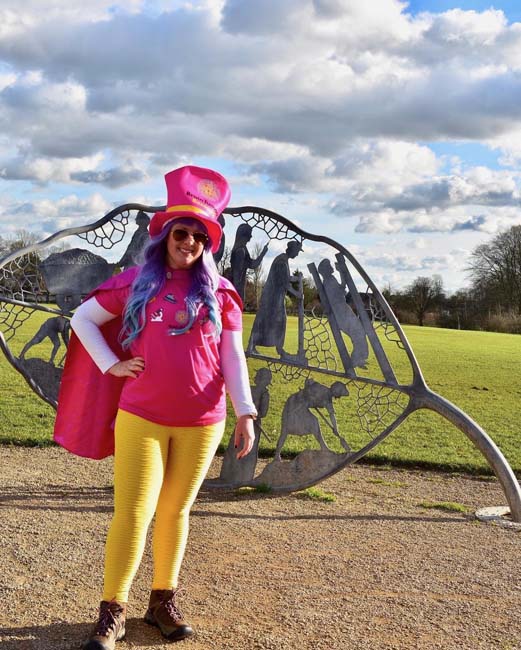 Additionally, I owe huge gratitude to my husband as well as my family who have always stuck by my side while I underwent my brain surgeries. Their support has always given me the courage and the strength that I needed to keep pushing on whilst undergoing some of the most challenging times in my life. My faith was another thing that got me through. Sometimes, it was the only thing I could cling to while undergoing the many shunt revisions I had to endure. 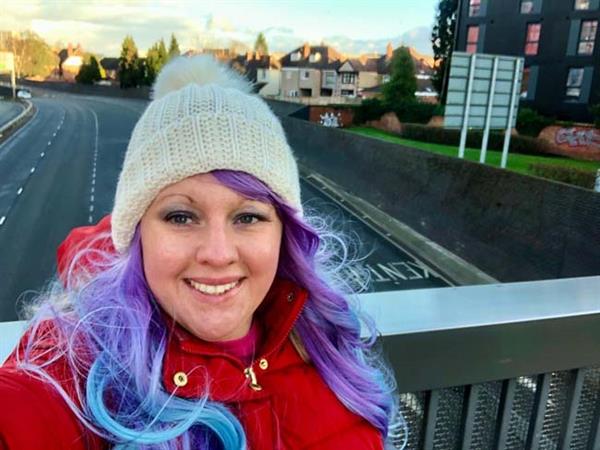