Jess was just 13 years old when she was diagnosed with a brain tumour. She has endured two craniotomies and numerous rounds of chemotherapy and radiotherapy. Despite her poor prognosis all those years ago, with the help of her neurosurgeons and doctors, Jess is now 19 years old and studying at college to become a beautician.
For over 18 months, I’d been experiencing really bad headaches, nausea, balance issues and tremendous weight loss. Despite visiting the doctor numerous times, no correct diagnosis was given. I was treated for everything from an eating disorder to sinusitis; none of which helped my condition. The doctors didn’t seem to have any idea what was wrong and never once thought to send me for a scan.

By July 2007, I began experiencing problems with my vision and visited an optician for tests, who advised I go immediately to the nearest A&E. After arriving at our local hospital and seeing the doctors there, I was sent to Stoke Mandeville Hospital, near Aylesbury, for an MRI scan. Within 48 hours my whole world had turned upside down. I was given the terrible news that I had a brain tumour in my cerebellum and I needed urgent surgery to try and remove it. Although the news was completely shocking, it was also somewhat of a relief to finally find out what was really wrong with me.

That evening my Mum, Granddad and Nana drove me to The John Radcliffe Hospital in Oxford where I was admitted. The following day I underwent seven and a half hours of surgery under Neurosurgeon Jay Jayamohan and his team. Unfortunately, only 70% of the tumour could be removed due to excessive bleeding and afterwards I spent three days in intensive care before being moved to the Children’s Cancer Ward. Further surgery was required to stop the build-up of fluid on the brain and a week or so later I had a Hickman Line surgically inserted for chemotherapy. It was during this time that I learnt that I had a malignant Medulloblastoma.

After a month in hospital, I became an outpatient and received several cycles of chemotherapy and 32 sessions of radiotherapy on both sides of my brain, as well as at the top and bottom of my spinal cord. All of the treatment was completed by the middle of January 2008 but by then I was confined to a wheelchair as I’d had a stroke during the operation which, combined with the effects of chemotherapy, meant I could no longer walk. My Mum, Granddad and Nana took me off to Spain on a holiday in February for a much-deserved break and despite being very tired because of the treatment, I still managed to really enjoy it.

For the next year or so, most of my efforts were directed at trying to walk again and regain my strength. I was desperate to get back to as normal a life as possible. I was also having check-ups at The John Radcliffe Hospital, plus regular MRI scans. The physical side of being able to walk again was a massive challenge as I had lost so much weight and constantly felt tired; everything was such an effort. However, my private physiotherapist Mike Banks (ex-Chelsea FC first team Physiotherapist) came to my rescue and after a lot of hard work with both Mike and at home, I managed to rid myself of the wheelchair and crutches. Today I can get around on my own two feet without too many problems.

Although I’ve been through a lot for a woman of my age, I’ve not let it hold me back. I’m getting on with my life, attending college three days a week studying Beauty and thoroughly enjoying the course. I’m also starting up my own beauty treatment business with my Mum at home, which I’m really excited about.

They say life is never easy and although I have had a tremendous challenge over the past six or seven years, I have tried to remain positive. To help take my mind off things and focus on something positive throughout my illness, I have undertaken fundraising for the John Radcliffe’s Children’s Cancer Ward and, through organising local events, raised over £30,000.

I have many people to thank for all the help I have received since being diagnosed. Firstly, my brilliant Neurosurgeon Jay Jayamohan, Sheila Lane, my Paediatric Oncologist Consultant and the nurses at The John Radcliffe Children’s Hospital. Of course, I should not forget my Physiotherapist Mike Banks and all the support from my family.

Six years and ten months on from surgery my latest MRI scan revealed “no visible sign of the residual tumour” and unless there is a relapse, no further MRI scans are planned. I have been transferred to The Churchill Hospital in Oxford to check on the side effects from the chemotherapy and radiotherapy and I’m pleased to say that apart from some balance and short-term memory issues, I have few problems but I know I’m lucky in comparison to many others who are diagnosed with a brain tumour. The statistics are shocking and there just doesn’t seem to be enough awareness of brain tumours.  With more and more people being diagnosed each year, the research funding for this form of cancer just doesn’t match.

If this experience has taught me one thing, it’s the importance of staying positive. I’m now concentrating on making the most out of life and am looking forward to what it brings me! 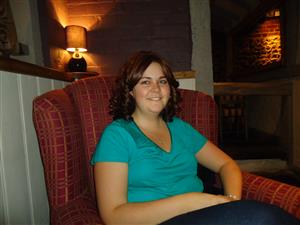