Hard working wife and mum Jess Richardson was used to managing on her own while her husband worked overseas. He missed out on the birth of their daughter Isla-Rose, but was airlifted home when, out of the blue, Jess was diagnosed with a brain tumour. She took part in a clinical trial and then underwent Gamma Knife surgery, which to date has successfully shrunk the tumour by around two thirds. Jess believes Isla has been her saving grace because having her means that there is no other option than for Jess to be well. She will not leave her daughter without her mum; that’s non-negotiable.

“Now, with the great gift of hindsight, it’s hard to imagine how I could have been so calm about things. Darren was away, I had an eleven-month-old baby to look after but it never really crossed my mind that something might be seriously wrong. I had an MRI scan the first week in February and the call that changed our lives came the following day. You know where you think to yourself ‘knowing my luck I’ll find out I’ve got a brain tumour?’ Well, that’s what happened to me and it’s no joke. I was at home on my own late on a Friday afternoon when the consultant called to say they had found something on my brain and I needed to see my GP immediately. Darren was in Iraq and I sat with Isla on my knee as a doctor I had never met before told me I had a brain tumour. The doctor said he shouldn’t have been the one to tell me the news but, believe me, hearing the news has to be far worse than telling someone.”

Life was good for me and Darren. We met outside a pub one night and were married in 2011 when we were both 31. We were working full time and had busy lives. Social creatures, we enjoyed music, evenings out and having friends round for drinks or dinner.

It was important to us to work hard and have focus. We liked the idea of retiring early and really enjoying life to the full. Darren had two children from a previous relationship and much of our life revolved around spending time with them.

Darren had left the army and was a qualified close protection officer. His work in private security took him to some dangerous places including West Africa and Gaza. I was home alone a lot and although it may seem quite extreme it was just how life was for us. I had always wanted a baby and we decided it was something we had better get on with!

Our beautiful little Isla-Rose was born in March 2014. Darren had been away for most of the pregnancy but it was just business as normal and I didn’t mind too much. Leave was restricted for him and we had always hoped he would be able to make it home for the birth but things didn’t quite go according to plan and it wasn’t until Isla was three weeks and three days old that he was able to meet and hold her for the first time.

Life with a new-born was as pretty much as we had expected it would be and, for a while, all was well. Isla was around eight months old when I began being sick and having bouts of double vision. I was referred to an eye consultant after a few trips to the GP.

Now, with the great gift of hindsight, it’s hard to imagine how I could have been so calm about things. Darren was away, I had an eleven-month-old baby to look after but it never really crossed my mind that something might be seriously wrong.

I had an MRI scan the first week in February and the call that changed our lives came the following day. You know where you think to yourself “knowing my luck I’ll find out I’ve got a brain tumour?” Well, that’s what happened to me and it’s no joke.

I was at home on my own late on a Friday afternoon when the consultant called to say they had found something on my brain and I needed to see my GP immediately. Darren was in Iraq so I took his mum along for some moral support and it was with her at my side and with Isla on my knee that a doctor I had never met before told me I had a brain tumour. The doctor said he shouldn’t have been the one to tell me the news but, believe me, hearing the news has to be far worse than telling someone.

Fortunately, an old-school friend of mine was a nurse at the practice and had stayed late in order to be there for me. It was a horrendous feeling as my heart sank and I felt horribly sick. At that stage, they couldn’t tell me anything concrete but it was likely the tumour was a meningioma, a type of tumour which develops in the tissues which surround the brain. I managed to speak to Darren by phone and he was pulled off duty and put on the first flight home. He left so quickly he didn’t even have time to pack a bag – and he has never gone back for his belongings.

Darren was with us less than 24 hours later, sadly not quite in time to see Isla take her first steps. We faced a two-week wait before seeing a consultant who then requested an additional scan. By then reality had started to kick in and we spent a lot of time chasing up to see what was going on. The not knowing was unbearable and everyone chipped in so we could pay the £500 it cost for a private MRI scan to speed things up. It was a big investment but seemed a small price to pay in comparison to my sanity.

It was 18th March, the day after Isla’s first birthday, when I was told my tumour was a schwannoma, a low-grade brain tumour which is usually slow growing. There were two options: watch and wait to see what happened or have surgery. I’m a control freak and can’t bear not knowing what’s going to happen. There was no way I could live with the “what if?” and run the risk that there was something growing in my head. I opted to take action and had surgery at the beginning of November 2015. The tumour was so entwined with my nerves and carotid artery that the surgeon was able to remove only a small portion. Post-op my diagnosis was changed and my walnut-sized tumour was identified as a slow growing cavernous sinus haemangioma which is extremely rare.

The surgeons managed to remove all but a very small portion and I left hospital after four days with 54 staples in my head from the front of my left ear curving round to just past the midline of my forehead. I looked pretty awful and, looking back at the photos now, I can’t believe it’s me. I recovered really well although I had headaches and experienced neuralgia. I had Botox injections to help with double vision and everything was looking positive so much so that we moved house, bought into a new business, got a puppy and changed our car.

Sadly, our positivity had been misplaced; a routine follow-up scan revealed the tumour was back and was bigger than before. So, it was not so slow growing after all and its rarity meant the doctors had little experience in how best to proceed.

The location of the tumour means that it could have an increasing impact on my vision if it grows and if it squeezes around the carotid artery which carries oxygenated blood to the brain it could be pretty much game over for me – needless to say we don’t like to think like that.

In autumn 2016, I started on a trial to see whether the beta blocker propranolol which had proved successful in shrinking tumours of a similar make-up to mine in children would also help shrink mine. I felt relatively well on the beta-blockers. I did, however, have off days when I had headaches and facial pain and sometimes it was difficult to cope with the anxiety of worrying what is a “normal” headache and what could be something more sinister.

I was on the waiting list for Gama Knife surgery which is a minimally invasive procedure and, finally in April 2017, I went to Sheffield to have the treatment, which is also known as stereotactic radiosurgery. Not surgery in the traditional sense because there’s no incision, the procedure uses very precise, targeted, high doses of radiation to the affected area with minimal impact on the surrounding healthy tissue.

It was a very busy month. Aside from my trip to Sheffield, my husband had a lump removed from his back the very same week, my dad was diagnosed a couple of weeks later with bowel cancer, which fortunately was completely removed through surgery, and my grandma spent a few days in hospital following a fall.

Darren was by then back working locally as a scaffolder while I worked part-time as an administrator with the estate agent and letting group Countrywide and I was writing a blog about my life with a toddler and a brain tumour. I hoped it would help other busy mums cope with the huge challenges of bringing up small children and, in a way, show that life can go on even when you fear it might not.

I had my first scan post Gamma Knife surgery in May of 2018 with the results in June and happily it showed that the tumour had shrunk by around two thirds. I will be scanned again around the same time next year and hopefully the tumour will have shrunk some more.

For now, I am living my life day to day on the basis that my glass is half full. If I allow myself to dwell on what might be I feel as if I will fall into a pit of despair. Isla has been my saving grace and having her means that there is no other option than for me to be well. I will not leave my daughter without her mum, that’s non-negotiable. 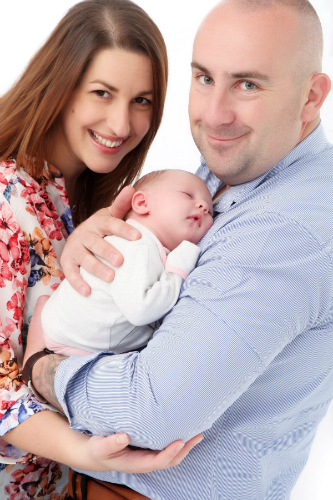