At the age of 59, Jenny Lambert received the news that she had a grade four brain tumour which had probably been growing since her teens. She feared she wouldn’t live to see the birth of her first grandchild but now, 18 months later, Jenny is back on her feet and looking at life from a new, uplifting perspective.

“Of course, there are parts of my old life I miss… but there is still so much that I can do and that’s what I choose to concentrate on. I now get to babysit my grandson, James, who I thought I would never meet, and that to me that is just so special. You would think that a brain tumour diagnosis would have completely turned my life upside down but I’m so fortunate to be able to say that it hasn’t. Although I can’t do everything that I used to, I’ve ‘learned to dance in the rain’ and not even a brain tumour can spoil things for me now.”

At a café near our holiday cottage in the Lake District, I saw a poster which said “Life is not about waiting for the storm to pass, it’s about learning to dance in the rain.” I’ve taken this philosophy on as my own throughout my brain tumour journey and it’s been a tremendous help in moments of fear or anxiety.

It all began in October 2016 when I started experiencing what I can only describe as a ‘spin’ in the top corner of my vision. It would happen for 20 minutes at a time and I had three of these episodes within the same number of weeks. After visiting my optician and GP, I was referred to a stroke clinic and sent immediately for a scan. My husband Ray came along with me and neither of us suspected anything serious and I knew deep down that I hadn’t had a stroke.

Then the news came that I had a brain tumour and it was like a bolt out of the blue. I spent the next week frustratingly waiting for a bed on the neurosurgery ward. I didn’t know how long I had left on this earth and I wanted to be spending my time with my husband and our two sons, Luke and Ben, not at this stroke clinic.

My escape during that week was when Ray would bring our four collies, friends and family, to have a picnic with me out the back of our transporter van in the car park. Ray and the boys were fantastic and their support and love meant the world to me during this time. Ben and his wife Beth were expecting their first child, our first grandchild, when I was diagnosed, and my wish was to live long enough to meet the new baby. Meanwhile Ray and our youngest, Luke, held the fort at our family business.

Eventually I was transferred to a neurosurgery ward and two weeks later I was taken into theatre. My tumour was grade four and surgeons believed it has been there since adolescence and that something recently had caused it to turn ‘nasty’. In all honesty, I didn’t want to know the ins and outs of my tumour and the medical background. I had huge confidence in my surgeon who assured me he would use a specialised technique to reduce damage to my brain.

One thing I do remember quite clearly is when, before my operation, the neurosurgeon told me that I may come out of surgery paralysed or even blind which was devastating to hear. I am so very grateful that neither of these things happened.

All I needed to know was that the operation was a success and that the active parts of the tumour had been removed from my brain. I was surprised to be in little pain after the operation but as I was heavily sedated, I don’t remember much of what happened over the days that followed. My vision and memory were poor but that was to be expected.

Within a few days, I was back at home and undergoing a six-week course of radiotherapy and chemotherapy. I then had a further six-month course of chemotherapy tablets which made me extremely tired but overall it wasn’t too taxing. What bothered me was the two-stone weight gain from the Epilin medication. A friend of ours recommended the ketogenic diet to me as her mum, who also had a brain tumour, found it worked for her. I gave it a go and as the weight steadily fell off, my vision improved, I gradually felt better within myself and learned to manage my short-term memory problems.

I had a brief scare when the chemotherapy ended as the results from my first check-up scan suggested the tumour was growing again. Thankfully it was false progression and there have been no more scares since.

Of course, there are parts of my old life I miss. In particular my dog agility, when I had competed at Crufts and Olympia with my wonderful little collie Wiz. Now I am just very grateful at being able to remember and run a simple course – but what the heck we still both enjoy it! There is still so much that I can do and that’s what I choose to concentrate on. I now get to babysit my grandson, James, who I thought I would never meet, and that to me that is just so special.

I’ve been travelling – to see Luke complete a triathlon in Copenhagen and to see my friends in Spain – and I’m going to climb Blencathra in the Lake District to fundraise. The mountain has always loomed over our little holiday cottage and I can’t wait to look at it and say I have overcome it. Fifteen of our friends from the dog agility community are joining us and we’ve raised over £3,000 for the Brain Tumour Research charity so far.

I’ve been walking the dogs and helping out at work to keep myself busy, and I’ve even applied for my driving licence to be reinstated but, in the meantime, driving the lawn mower will have to do!

You would think that a brain tumour diagnosis would have completely turned my life upside down, but I’m so fortunate to be able to say that it hasn’t. Although I can’t do everything that I used to, I’ve ‘learned to dance in the rain rather than wait for the storm to pass’ and not even a brain tumour can spoil things for me now. 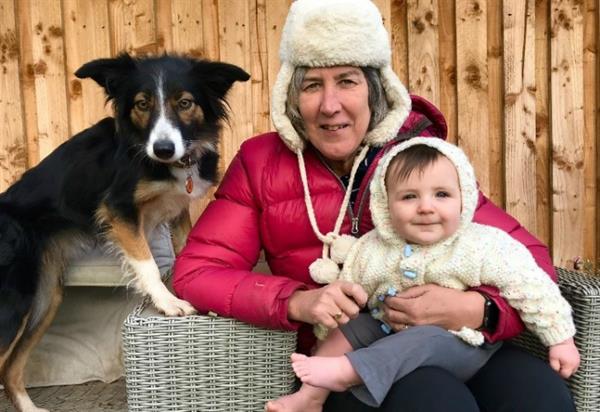