Although Jay's brain tumour was completely removed during surgery, he then had to undergo radiotherapy and chemo, leaving him with a number of different side effects. Despite his agonising ordeal he is looking forward to starting his degree course in Animation and Special Effects
Jay was only 14 when he started having excruciating headaches, which felt like acid being poured into his brain.  These resulted in lots of visits to the GP who put them down to migraine, hormones or stress.  Even appointments with an osteopath and an optician failed to pick up the underlying cause.

Then when Jay started being sick and his balance became affected, he was referred to a neurologist, where there were more delays because Jay was too old to be seen by a paediatrician and too young to be classed as an adult.  When we eventually managed to get Jay scanned, he was admitted straight into hospital.

The doctors didn’t want to alarm me, but they had found a big lump in the back of his head, which was blocking the fluid in his brain from draining away into his body.  An ambulance whisked us off to Great Ormond Street where Jay collapsed.  The fluid had become totally blocked and he was rushed into emergency surgery where the tumour was completely removed.

A week later the news from histology was not good.  The tumour, a Desmoplastic Medulloblastoma, was malignant.  It was absolutely terrifying.  I was in floods of tears.  My baby, my lovely boy.  I blamed it on all the stress of my having got divorced and moving to a new house.  And we were just getting ourselves all together too.

Jay was going to need radiotherapy and chemotherapy, but I needed to work just to pay the mortgage.  Fortunately my mother was able to become Jay’s carer at this crucial time.

The radiotherapy continued daily for six weeks and Jay had 18 months of chemo – one once a week and two other types which involved being admitted into hospital for three days every six weeks, resulting in some loss of hearing, growth problems (from knocking out his hormones), and slight memory problems.

Fertility is another issue.  Before Jay embarked on the chemo he tried producing some sperm, but after seven days he hadn’t produced any live ones – maybe as a result of the trauma of the surgery.  So we need to wait and find out whether he is now fertile.

I often ask myself why Jay’s brain tumour ever came.  Was it there from birth?  Was it genetic or caused by stress?  What caused it?  It has made me very conscious of how little we know about brain tumours and how much further we need to go in terms of research.

Jay is much more matter of fact about having had a brain tumour.  He is intent with getting on with his life.  When he wrote about his brain tumour as part of his English GCSE coursework and got an A, it almost made me cry.

I am so proud of my son, who, despite missing school during his key GCSE years, and being up against candidates who could offer a baccalaureate (equivalent to 6 A’levels) has secured an unconditional place at college to do a degree in Animation & Special Effects.  Good has certainly come out of bad.

We are now involved with the charity Ali’s Dream www.alisdream.org.uk which raises funds for childhood brain tumour research, so that we can find a cure for this devastating disease. 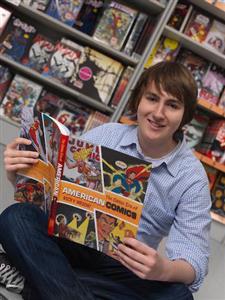