Forty-four-year-old Janet from Reading in Berkshire initially thought she was suffering from sunstroke. After phoning NHS 111, she was referred to Royal Berkshire Hospital for an MRI scan and a week after her symptoms started, she was diagnosed with a glioblastoma multiforme (GBM). Following debulking surgery at the John Radcliffe (JR) Hospital, Janet is now receiving palliative care and is currently undergoing gruelling radiotherapy and chemotherapy treatment which she is due to finish in early December. Here, Janet shares the story of her brain tumour journey so far and how she and her husband Steve broke the news to their two young children.

There was a week between thinking I had sunstroke to receiving a diagnosis where I was told it was unlikely I would live beyond five years.

Before having my two children, Peter who is eight and David, four, I worked as a home carer. This meant I worked early morning and late nights which proved challenging trying to raise a young family and in 2017 I gave up work, taking on voluntary roles within the community to fit around childcare. As well as running a local toddler group, I organised the church Sunday school rota and supported a group to help run a toy library in Burghfield Common, a small village where I live. 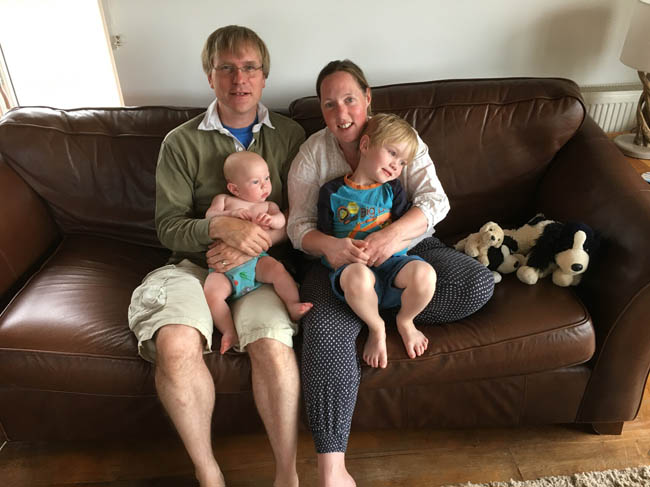 In May 2022 I hosted a stall at the village fayre as part of my volunteering role. It was the same time we had a mini heatwave in the UK. I spent most of the day outside under the sun and shortly after, started to feel groggy. I put it down to having been in the sun for hours after almost two years of lockdown, perhaps I wasn’t used to the combination of heat and being in the sun, maybe I was suffering from sunstroke?

A week later my headaches became severe, I couldn’t shake them off and I was easily confused. 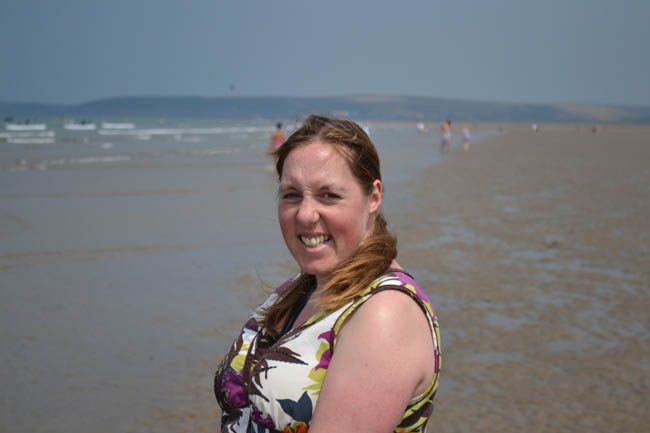 My husband, Steve encouraged me to call the NHS 111, and we were offered an out of hours appointment at Royal Berkshire Hospital.

Somewhat awkwardly we called round to our neighbour, Slavitsa to see if she could look after our sleeping children for an hour or two while we went off to the appointment. Slavitsa has a child of her own and we knew each other from the toddler group.

An MRI scan showed something on my brain, likely to be a tumour, and I was admitted overnight.

Slavitsa ended up on our couch until Steve was able to relieve her at half past six the following morning when Slavitsa gave him strict instructions about staying positive. That kind of help is shockingly generous.

The next morning I was told the tumour was a glioblastoma multiforme (GBM).

A week later Dr Plaha from Royal Berkshire Hospital delivered the devastating news that it was unlikely that I would live beyond the five years and I was placed on a palliative care plan.

“Hearing this outcome, I was in floods of tears. I went from thinking I had sunstroke, to finding out I had terminal brain cancer.”

Over the Queen’s Platinum Jubilee weekend in June, surgeons at the JR removed half of my tumour – they called me a ‘star patient’ as I wasn’t nervous and didn’t fidget going in the operating theatre. 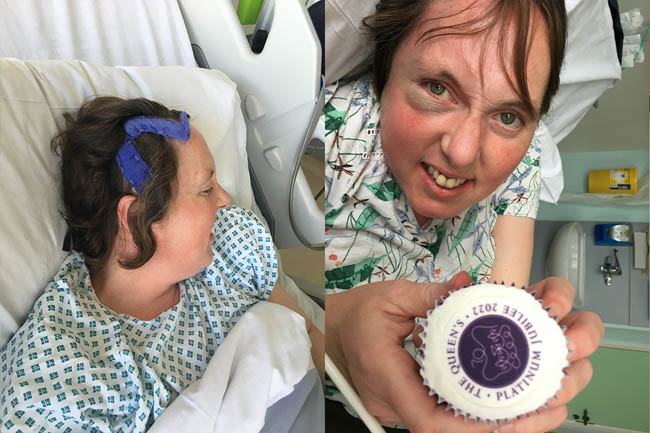 I came through my debulking surgery with no life-changing injuries which was a concern for the medical team due to the mass growing over two lobes. However this meant that only half the tumour was removed, for fear that I could be left with physical changes to my body and so I would need radiotherapy and chemotherapy to target the remaining cancer.

I’m half-way through a six-week course of radiotherapy and a week into chemotherapy and so far I feel really well. I know that as my treatment continues, I might start to feel more tired but until that happens I intend to live everyday as it comes and don’t worry about something until it has happened.

My healthcare team have been absolutely tremendous in making me feel calm and reassured right from the start.

I feel like my strong faith in God has also helped me through the last few months with my friends offering their prayers.

The day I came home from the hospital, Steve had a mini stroke (known as TIA) and was advised not to drive for a month whilst he recovers which meant we relied on friends‘ support with driving the children to school, picking them up, attending medical appointments and everything in between. We are very lucky to have a generous support network around us.

Telling the children was hard. We took them out of school and spent the day together, as a family. 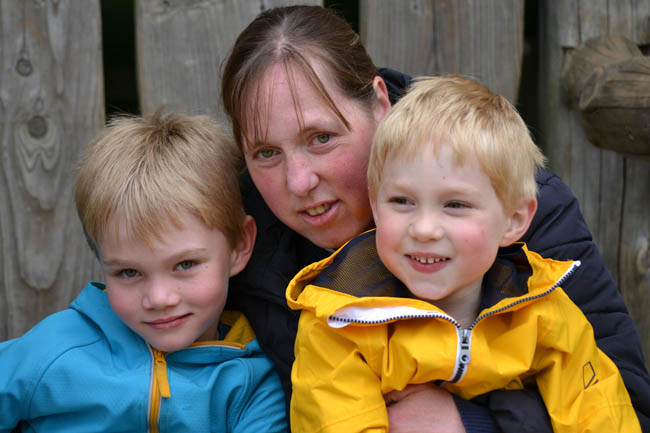 I was given a booklet by one of the nurses with the title ‘how to talk to children when an adult has cancer’ which Steve and I read through. Following the advice of the booklet we were honest and chose the time and place to tell them. We took them to a familiar park and hit the play area, before sitting down to a picnic lunch. Peter asked why we’d taken him out of school that day. That had to be the moment, so Steve told them, using a stuffed toy gorilla to indicate where the tumour was in my head: ‘in a year or two it will be just the three of us’. Through streaming tears Peter kept repeating the phrase, ‘but I don’t want it to be three, I want it to be four’. David just asked for a jam sandwich. Later the mood lightened and we played hide and seek. The MacMillan advice was good and a month later, we can talk about the situation comfortably with Peter, when I have radiotherapy he says ‘mummy is going to see captain brain zap’. David still shows no awareness. 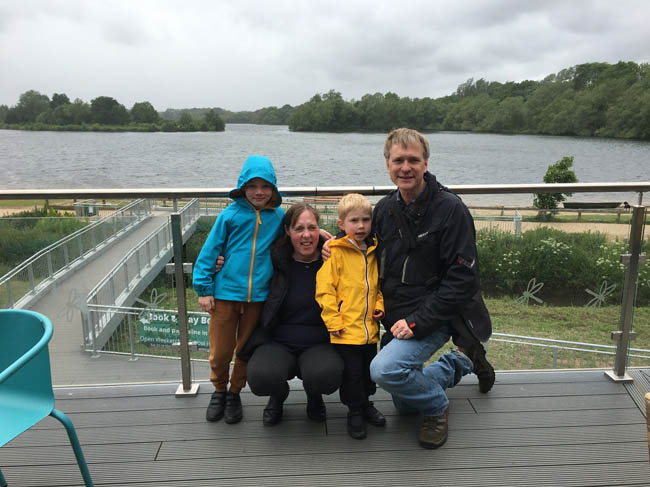 My diagnosis has made me take a step back from some social situations and I often  meet up with people outside rather than indoors as I am concerned as to how COVID may impact me having had brain surgery and receiving treatment.

I was preparing to enter the world of work as pre-school assistant in September, the same time that David will start school. That’s now been put on hold until I finish my treatment in August.

Although I have taken a step back from my voluntary roles, I am keeping busy by organising a raffle in aid of Brain Tumour Research in July. My friends and family would describe me as a quiet pillar of the community and I have been overwhelmed by the outpour of support both practical and emotional, which they have offered me.

Certainly for me, having a brain tumour wasn’t something I thought about – you donate money to the cause and then get on with your day. My treatment is due to finish December where I will be scanned again to see how the treatment has helped.

My hope is to get back to ‘normal life’ at the moment, I’m trying not to think beyond January 2023. 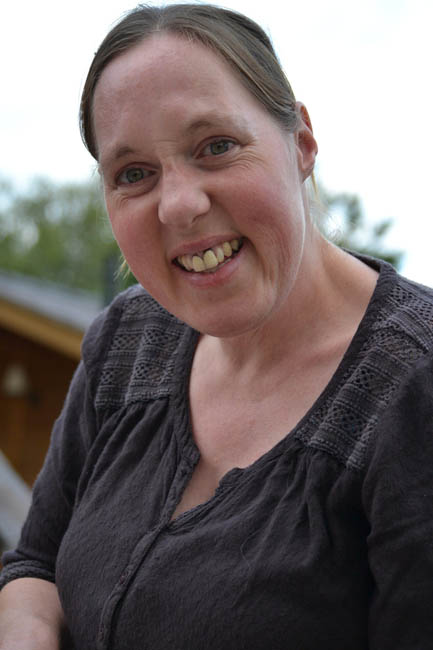