Janet is one of three sisters who live in Northamptonshire who were all diagnosed with meningioma brain tumours. Sadly, she lost one of her sisters in May 2020 during the coronavirus pandemic. Janet remains positive and passionate about supporting research to find a cure.

I was the first and eldest of three sisters to be diagnosed with a brain tumour. It was back in January 2008, when, aged 68, I started displaying some really worrying symptoms.

“I was all over the place doing really stupid things like leaving the gas on and letting a saucepan burn dry. My husband, Adrian, literally had to stay with me and keep watch over me.”

I was also falling over a lot and had a fall in British Home Stores in Northampton whilst looking after my grandchildren. It broke my heart when it was decided that I wasn’t able to look after them anymore. 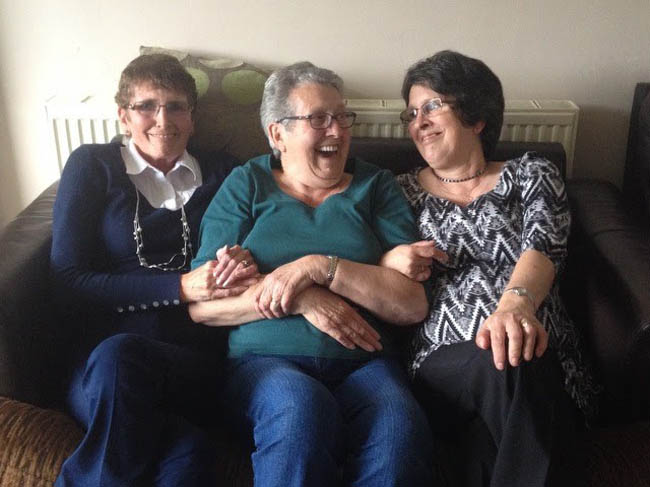 A GP thought it might be the start of dementia, but our family doctor sent me to have an MRI scan as he wasn’t happy. Adrian picked up the scan and took it down to the surgery. The next thing we knew, we had a phone call from the doctor to tell us it wasn’t good news. I had a brain tumour across the top of my head and he was referring me to the John Radcliffe Hospital in Oxford.

I was put under the excellent care of neurosurgeon Mr Richard Kerr. As well as an MRI on my head, I also had a body scan which revealed a tumour on one of my adrenal glands and was referred to the Churchill Hospital, also in Oxford for this.

Meanwhile Mr Kerr decided I needed surgery on my brain tumour. He explained that he was going to make a window in my head so I asked him if I could look out of it! Mr Kerr basically gave me my life back.

In 2009 I had one of my adrenal glands removed along with the tumour there.

During the same year, a nodule showed up on my scan and Mr Kerr told me we would need to keep an eye on it. By 2011, the tumour had grown again and it was decided I needed more surgery before it got too big and I started having symptoms once more. I underwent a further operation in 2012 which resulted in a partial removal, complicated by the fact that the tumour was growing on a vein which went through the middle of my head.

In 2015, another scan showed further growth, and so, in July 2016, I was at St Bartholomew’s Hospital (Barts) in London to have gamma knife surgery. Since then I have had a scan every year and, touch wood, it continues to remain stable. 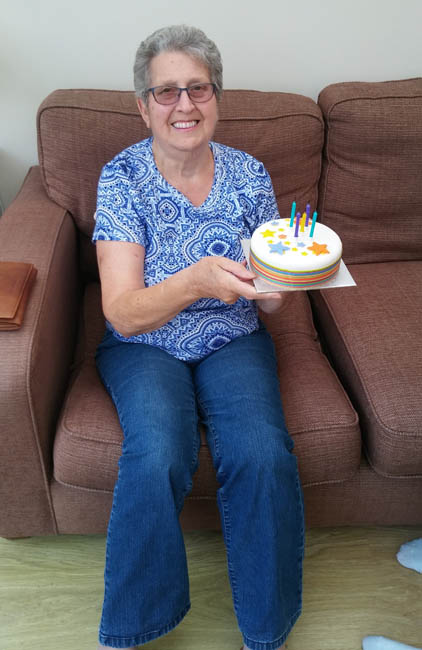 My youngest sister, Diana, who is 10 years younger than me, was diagnosed with a brain tumour at the back of her head in 2010. She didn’t have it removed because it was calcified but she did have a shunt fitted to drain off excess fluid. Diana has been fine ever since, although she does have a scan every two years just to check that all remains well.

Our middle sister, Lesley, was 69 in September 2017 when she had a fall in the bathroom and knocked her head. She was taken to Northampton Hospital as she was badly concussed and had a CT scan followed by an MRI which revealed a small tumour behind her eye. She was told in August 2018 she had to live with her tumour, but later started to walk in a wibbly-wobbly way and went back to see the consultant. It was found that the tumour had grown rapidly.

Lesley was referred to the University Hospital Coventry & Warwickshire where, shockingly, she had a stroke during surgery in April 2019. It set her back a lot and she also lost the sight in one eye, as well as her hearing. Her husband John would visit Lesley every day and was there bang on 11am, staying with her until the end of day-time visiting, then waiting in the car until evening visiting hours began and he could go in again.

Lesley was then transferred to Northampton General for rehabilitation. She was doing quite well and also had 28 sessions of radiotherapy. Again, John would visit every day and then go back in the evening. He couldn’t have done more for Lesley.

“As Britain celebrated VE day on 8 May during lockdown, Lesley passed away with pneumonia. We were told that infection on the brain tumour was as much to blame as anything. She fought so hard and loved life.”

Lesley died before getting the result of her last MRI scan to see whether the treatment had shrunk the remains of the tumour. And we still don’t know any more.

A fortnight before Lesley died, her husband John had had to call for an ambulance because Lesley was having fits. Nobody could visit Lesley in hospital because of Covid-19, including John, so we never got the chance to say goodbye. It took me until her funeral to fully realise that Lesley wasn’t coming home. Life is so cruel. Now we have to look out for John, Lesley’s son and her grandchildren.

It's strange to think that the three of us have all had brain tumours. Our mum had a cancerous growth growing out of the side of her head which couldn’t be removed without taking half her face, so she didn’t have the surgery. She underwent a course of radiotherapy which kept her going for 14 years. She lived until she was 81. 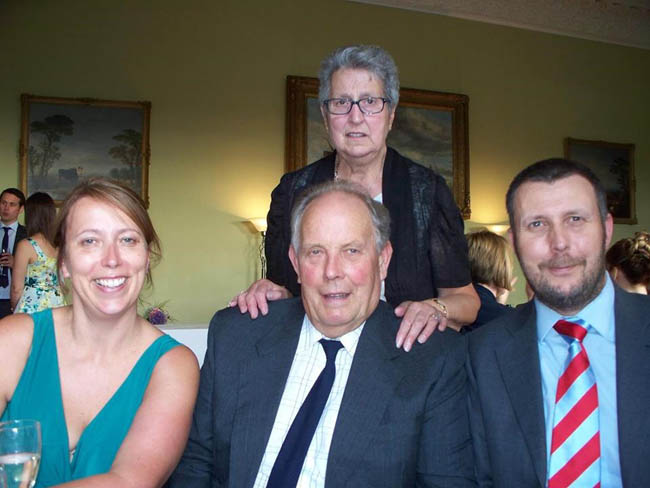 I keep smiling even though life has been pretty tough at times. I lost my dad when he was just 49. I am a proud mum of two – with a son called Gary and a daughter Sally, as well as having two much-loved grandchildren. Gary was an officer in the Metropolitan Police and was diagnosed with chronic lymphatic leukaemia. He continued to work and only retired last year after 30 years. He’s doing ok, but is obviously shielding now because of coronavirus.

I also lost my brother. He died of a broken heart after losing his daughter aged 20 to a severe asthma attack and also his wife, when she was only 50. He couldn’t come to terms with the double tragedy.

I feel so very lucky to have my husband Adrian with me when so many of my friends and family are now living on their own. 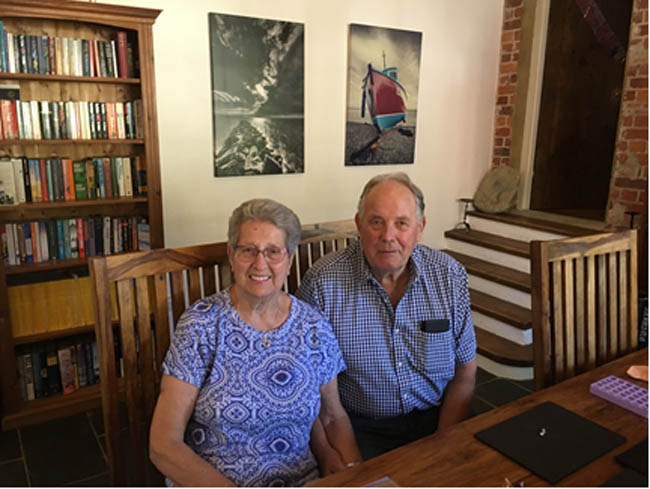 “I have known Adrian for 64 years since I was 16 and he was 17 and we met on 10 June. We celebrate that anniversary particularly because our wedding anniversary is on Boxing Day (it will be 59 years this year) and Adrian’s birthday is on New Year’s Eve. We do everything together. He really is my best friend.”

Apart from Adrian, my other passion is rugby. In 2005, Diana and I left our husbands at home and went off to New Zealand for a whole month for the British and Irish Lions tour. Although they lost every match of the test, we had a marvellous time. I also follow our local team, Northampton Saints and have had a season ticket for years. I always feel I’m the youngest teenager down there, but won’t be renewing it this year because I don’t think it’s safe in these days of the coronavirus pandemic. I treasure this picture of me with Ken Pisi who used to play with the Saints. 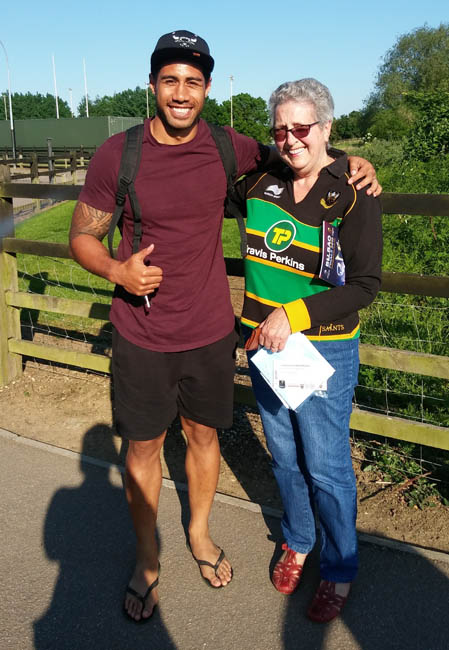 I have supported Brain Tumour Research for a number of years since before the charity moved from the farm in Padbury to Milton Keynes with regular giving and buying Christmas cards. I was delighted to be invited to the charity’s 10-year celebrations. I haven’t got a lot of money, but I would give my last penny to the charity. After all, you don’t know what’s going on in your head – do you?

If you have been inspired by Janet's story and would like to know more about our lobbying, research updates and fundraising opportunities, please sign up to our weekly e-news. 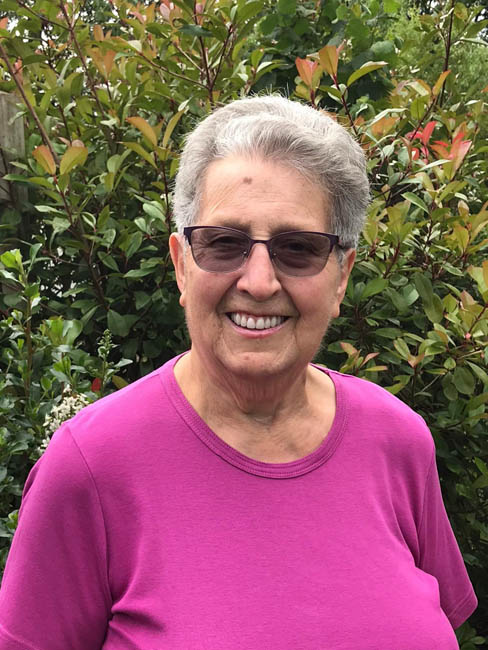