James Hinnigan was enjoying life with his partner and their son in Australia when he was diagnosed with a low-grade glioma brain tumour. The family moved back to Greater Manchester just before Christmas 2015 to be near friends and family as they faced the uncertain journey ahead. In the months that followed, James underwent pioneering surgery and mobilised thousands of people to sign an e-petition calling for more funding for research. He’s faced many challenges along the way but now, in 2018, life is on the up again for him and his family.

“On the whole though, I am positive and try to remember that there is someone, somewhere, who is worse off than me. This is the hand I have been dealt and I have to get on and play the game.”

Wendi and I had always liked the idea of travelling and so, when I was finding it increasingly difficult to find work as a plumber in the UK, we brought our plans forward and set off in 2009 on what was supposed to be a 12 month trip.

We worked our way across south east Asia and saw countries including Japan, China, Hong Kong, Vietnam, Cambodia, Laos, Thailand, Malaysia, Indonesia and Singapore. We settled in Australia living in Sydney, Melbourne and finally the Margaret River region of Western Australia, where our son Cameron was born on 8th August 2014. We were loving life as a new family.

In the end, we were away for six years. We had always intended to come home for a three-month break in September 2015 when we planned to get married. We did come home not long after that but for another reason entirely.

It was three months before our planned trip back to the UK when I was taken ill. We were at home when I felt a tingling sensation in my feet and lower legs. It was like pins and needles travelling up and down my body in waves. I lost my co-ordination and was also drained of strength in my arms and legs. My speech seemed to come and go as we drove the 30 minutes to hospital. I thought I was having a stroke and was very frightened. I was 36 and life was good, how could this be happening?

Once we arrived at the hospital I was hooked up to all sorts of monitors. I was also asked to draw a diagram of a clock but could only place the numbers on one side. I stared down in disbelief, how was it that I was unable to do something so basic which I wouldn’t even have given a second thought just hours earlier?

The thinking was that I had indeed had a stroke. I was transferred to another hospital for an MRI scan and it was soon after that I was told I had a brain tumour. The news left me in pieces; I was on the floor and crying my eyes out. Wendi was deeply shocked and I asked to speak to the doctor in private. If there was more bad news, I wanted to be the one to break it to her. The nightmarish situation was made worse by the fact that they couldn’t tell me anything else. We went home and waited for an appointment with a neurosurgeon. I was so desperate to find out what I could about the disease and what type of tumour I might have that I started searching the internet. Of course, that was a bad thing to do and left me feeling as if I would be dead within a week.

We drove the four hours to Perth to meet neurosurgeon Sharon Lee who told us things weren’t as bad as they might be. My tumour was most likely to be a low-grade glioma and would be operable. There were concerns that surgery could leave me with a speech deficit and so I underwent more tests. Our life had been shattered and the circumstances in which we found ourselves left us feeling isolated, a long way from our family and with a limited support network. Of course, we had made friends in Australia but it was time to come home.

As soon as they heard I was in hospital with a suspected stroke, my parents were on a plane. By the time they landed we had to break the news that I had a brain tumour and that is a terrible thing to have to tell your mum and dad.

We cancelled the wedding but my stag do went ahead. I couldn’t make it of course but ten or so of my friends decided to go ahead and “celebrate” in Ibiza wearing masks of my face. It’s lucky I’ve kept my sense of humour as it was all a bit annoying; there I was thousands of miles away from home, newly-diagnosed with a brain tumour and back at work emptying bins at a holiday resort while they were living it up on the beach.

It was disappointing that when Wendi, Cameron and I left Australia it wasn’t on our own terms. We moved in with my parents in Ashton-in-Makerfield where I grew up and although it was great to be back near family, it took a bit of getting used to after having our own place for so long. Cameron is four now and knows he was born there – he must think his dad really does need his head checking for choosing to move back to Ashton-in-Makerfield! I’d like to think we’ll go back one day.

Around the time I was diagnosed, there was a story on the BBC about a pioneering treatment which had been used on a brain tumour patient for the first time in Europe. My family told me about it and I got my GP in Australia, who had also seen the report, to refer me to Charing Cross Hospital where the trial, using the iKnife and laser which both make delicate brain tumour surgery faster and more accurate, was taking place. I was over the moon to be accepted onto the trial and I had surgery in March 2016 with Babar Vaqas, the trial chief investigator, and neurosurgeon Kevin O’Neill who leads the Brain Tumour Research Centre of Excellence at Imperial College.

I consider myself lucky to have been accepted and I hope the trial will help further people down the line. The iKnife can identify healthy and diseased tissue in real time without the need for sending biopsies and analysis during the operation. They woke me up during the procedure and, by talking to me, the surgeons assessed how much tissue they could remove without damaging my speech.

To say I was buzzing after the surgery would be an understatement. I felt so lucky to have undergone a successful operation and I couldn’t wait to be 100%, get back to work and get on with my life.

During this time, I also campaigned to get more signatures on Brain Tumour Research’s e-petition calling for more government investment into research for brain tumours. More people in the two constituencies of Wigan and Makerfield signed the petition than any other area in the country. The petition led to a Parliamentary debate in April 2016 that saw MPs gather to discuss brain tumours. It was a great feeling to know I’d made a difference.

After the highs, however, came crushing lows. It dawned on me how much life had changed. Living with my parents, not working and not being able to drive had a huge impact on my self-esteem and I felt increasingly isolated. Wendi was pregnant with our daughter Rose, who arrived in May 2016, and I couldn’t help but compare life now to what it had been when we welcomed Cameron. We moved into our own flat a few months later but I continued to struggle with depression and anxiety. Eventually I started going to support groups and meeting other people affected by the disease, I also started taking anti-depressants which gave me the energy I needed to piece my life back together.

Having my driving licence reinstated was a huge turning point for me as I was able to start working again and stand on my own two feet. My confidence came back and in summer 2018 I was ready to come off anti-depressants too. It’s been a long road but I’m pleased to say I’ve made it. Apart from feeling more tired than I used to, I feel well within myself and I’m only having scans once every six months. Looking ahead to the future, I’d like to get back into plumbing and give Wendi the wedding we were supposed to have before my diagnosis, but until then I’m just happy the life is on the up again.

Of course, I always think about the tumour: will it come back and, if so, when? When people you’ve met with the disease have had recurrences and some have even died, you can’t help but wonder what’s next. On the whole though, I am positive and try to remember that there is someone, somewhere, who is worse off than me. This is the hand I have been dealt and I have to get on and play the game. 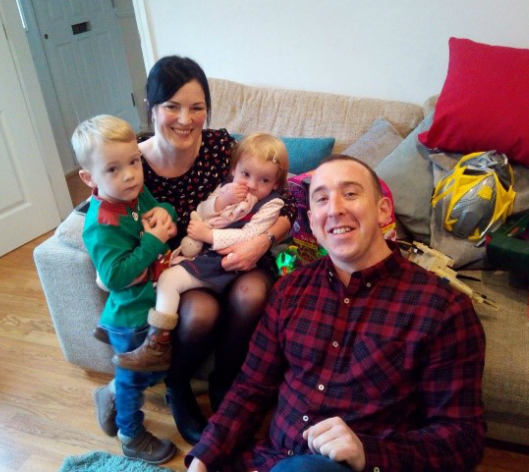