Life was turned upside down in August 2000 when James, aged nine, was diagnosed with a brain tumour and underwent two huge operations. After the last operation he was left with weakness down his right side, severe speech problems, as well as educational and visual difficulties. Today, James’ story is one of hope as he overcomes his disabilities and looks to a more independent future.
Looking back, it was how James’ behaviour changed that we know now were the first indications of his disease.  Over a few months he became very lethargic and was just not himself.  After his birthday, I sat James down to write thank you letters and was shocked to find his writing looking like a spider had crawled across the page.

After a visiting specialist teacher observed that James was no longer able to hold a pen properly, I spoke to a GP regarding his changes.  A blood test was carried out and came back indicating that James’ iron levels were slightly low.

We then saw a paediatrician who didn’t seem unduly concerned about James until we mentioned a little tick which had developed in his hand.  It was only when a piece of paper was laid on James’ hands and also on his brother’s hands that the paediatrician could see a distinct difference, but he was still reluctant about sending James for a scan.  Even then it seemed that no one believed me that something was wrong.

We persisted however and the subsequent scan revealed a very rare brain tumour and a cyst the size of a mandarin.  Despite all our concerns, we were totally unprepared for such devastating news.

James went through two huge operations – the first to remove the cyst and alleviate the pressure which had built up in his brain, the second to remove the tumour and almost the whole of his left temporal lobe.  At that time his particular brain tumour couldn’t be treated with chemo or radiotherapy.  The treatments left James with considerable weakness down his right side and severe speech problems, as well as visual and learning difficulties.

Time stood still for months on end, but through sheer determination James got back on a skateboard within six months and his bike after two years.  He rarely complained and was always cheerful.  He was spurred on over the years by such a wonderful, dedicated team of specialists in all areas, especially in physio and speech therapy.

Through sheer determination, James defied all the ‘managed’ expectations and achieved seven GCSEs, employing mind-mapping techniques which helped him to learn in a visual way.  James went on to achieve an AS level at Grade A, a BTEC National Diploma with three distinctions and then a Foundation Degree in Art and Design.

James has an acquired brain injury which is a hidden disability and no one can see that he has lost a huge part of his brain. Due to his visual impairment, he is unable to drive and has to rely on others to get about, and still needs support in many other areas.  The job market for someone like James is practically non-existent and the search for suitable employment is quite soul-destroying.  James has applied for numerous jobs, has had one interview and only two replies to all the applications so far.  He is desperate to find a job and “wants to do something with his life”.

It has been an incredible journey.  We are so proud of James and what he has achieved through his remarkable strength of mind.  He loves challenges and is now focusing on para cycling!

His life has enriched us and has shown us how much good has come out of this “evil tumour".  We live in hope and live life to the full, savouring every moment that we have as a family.  But it has also left us with anger and frustrations at the "not knowing":  the chronic lack of investment in brain tumour research, the lack of knowledge about how and why brain tumours are formed, and the fact that there is still no known cure.  Life still goes on hold at every scan.

Despite all the ongoing challenges, James is a cheerful young man with a strong determination to succeed beyond his limitations. He knows that he is a very lucky and is thankful every day for the life he has.

Our hearts go out to those families who are going through worse than us or  have lost their fight against such a dreadful disease.  There is a desperate need to raise money to fund research which will combat this "beast". 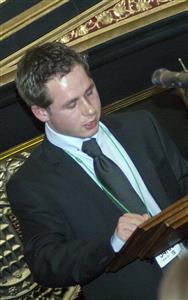