Husband, father and grandfather Ian was 55 was when he was diagnosed with a low-grade brain tumour. He underwent surgery and was able to return to work but began to experience seizures, now controlled by medication, as the tumour grew back. No other treatments are available and further operation to de-bulk the tumour is seen as a last resort.

“Telling my children I had a brain tumour is, without doubt, the worst thing I have ever had to do. I can’t bear to see them upset and it makes me sorry to think that their lives are tinged with sadness because of me but, it is what it is; I am still here and determined to enjoy whatever time I may have with them. For a while the tumour was dormant and like a walnut in my brain but now it is growing once more. There are no other treatments other than a de-bulking operation which would be the last resort. In many ways I feel as if a breakthrough with a new drug is the only hope I have and that is why the research being funded by the charity Brain Tumour Research is so vitally important.”

I was fit as a butcher’s dog until I got into my 50s. I played football three times a week, and loved squash, tennis and badminton too.

When I started to suffer from regular headaches and the occasional migraine, which forced me into bed in a darkened room, it was blamed on high blood pressure. It took my wife Annette to point out that my car, strewn as it was with various painkillers which I hoped would give me some relief, looked like a pharmacy and I needed to do something about it.

Ironically it was at work in my role as a health and safety assurance engineer for British Gas that I started to experience symptoms which threatened my own safety. I was training a group of guys when I tripped up on a yellow hazard sign and, later the same day, I walked into a doorframe and narrowing missed being knocked down by a passing car which I simply did not see as I went to cross the road.

I was driven home by a colleague and Annette took me straight to A&E as advised by our doctor. I had a brain scan and was told that as well as migraine symptoms, I had burst a blood vessel in my forehead, but what they were really worried about was the tumour they had found in my brain. It was such a shock; my wife and daughter immediately burst into tears but for me, the shock and the anger came much later. It just didn’t seem real and I genuinely thought the doctor who broke the news was talking to someone else.

It was only after about my third day in hospital that the diagnosis sank in and I sat in my hospital bed with the curtains drawn around me as I sobbed my heart out.

A month after my diagnosis in April 2013, I was in surgery for a craniotomy operation to remove the tumour which we later found out was a low-grade meningioma. It was described by my surgeon at the Walton Centre in Liverpool as the largest of its type they had seen. A slow-growing meningioma, it had probably been there for five years and was the size of a duck egg, 68mm x 53mm.

It was not possible for 100% of the tumour to be removed as it was so close to my optic nerve but things looked positive. I was scanned after three months and told pretty much to go away and enjoy the rest of my life. Sadly, nine months later, when I underwent another “routine” scan, the tumour had grown back and was already the size of a golf ball.

I underwent radiotherapy, 30 doses in all, but the treatment caused the tumour to swell giving me epileptic seizures which are now controlled by high doses of drugs which, together with the steroids I take, have caused me to put on weight. Prior to my treatment I weighed between 11 and 12 stones, now I am 17 stone and, although I would love nothing more than to get out and run, or do some other form of exercise, I am unable to as this causes my body to swell up. The doctors haven’t been able to fully explain this although it is some reaction caused by the radiotherapy.

Although I did get back to work for a while, the side-effects of my drug regime meant it was short-lived. I have spent half of my working life in the role which I love and getting back to work is a big motivator. Another thing which inspires me is the thought of getting back on a motorbike. In the past, I’ve had racing bikes which have appealed to my love of speed but, next time, I’d be happy with something more sedate and would be very happy cruising around on a Harley-Davidson.

I was able to drive for a period after my initial diagnosis but the seizures mean I am once again without a licence and will be so until I can go a year seizure-free. At the moment I am getting used to the increased doses of drugs which have slowed down my thought process; I certainly can’t cope having a succession of questions fired at me as I used to.

For a while the tumour was dormant and like a walnut in my brain but now it is growing once more. There are no other treatments available which could help me other than a de-bulking operation which would be the last resort as it may well affect my future quality of life. In many ways I feel as if a breakthrough with a new drug is the only hope I have and that is why the research being funded by the charity Brain Tumour Research is so vitally important.

My wife, God bless her, has stood by my side through all of this and I am immensely proud of my daughters, my step-children and my granddaughter.

Telling my children I had a brain tumour is, without doubt, the worst thing I have ever had to do. I can’t bear to see them upset and it makes me sorry to think that their lives are tinged with sadness because of me but, it is what it is; I am still here and determined to enjoy whatever time I may have with them.

Sadly, a colleague at work was diagnosed with a brain tumour and passed away very quickly while a former neighbour lost his wife within weeks of her brain tumour diagnosis. To be able to help both of these people by offering them support has been very rewarding. It has taken my mind of my own troubles and it is very positive o think that I can be of help to others. 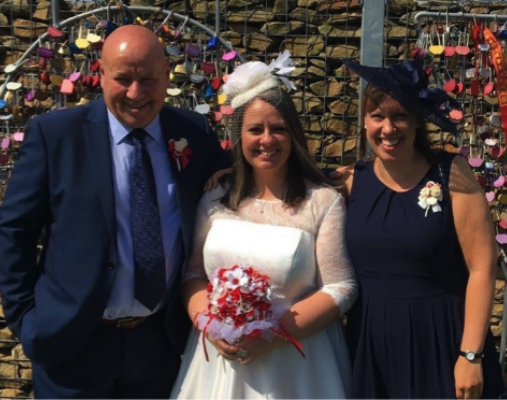