Six-year-old Harry was diagnosed with a suspected diffuse intrinsic pontine glioma (DIPG) after what should have been a straightforward procedure to fit a grommet in his ear revealed a sinister growth in his brain. His tumour type has a shockingly poor prognosis and limited treatment is available. There is no option for Harry who will battle for his life dressed as Spider-Man, his favourite superhero.

“I am shocked to learn that brain tumours are the biggest cancer killer of children and adults under the age of 40, yet so many people still think it is leukaemia which is killing more of our precious children than any other form of this hideous disease. I am angry to think that Harry will have to live away from the security and comfort of his own home during treatment and I am frightened to think of what lies ahead.

We weren’t far into the New Year when Harry became ill with an ear infection. It was really horrible for him, poor thing, his ear drum burst and he had stuff pouring out of it. With the help of antibiotics it cleared up but, two weeks later, the infection was back and this time it was even worse. Just a few days after that it was as if his face had collapsed on one side.

Our doctor sent us to Queen Alexandra Hospital at Cosham where the problems were put down to a middle ear infection. He was going to be fitted with a grommet, a simple procedure, which would help prevent it happening again. A CT scan revealed an anomaly and the medical team were unsure if what they were seeing was a pocket of fluid caused by the infection or something more sinister.

Harry had an MRI scan followed by what should have been a procedure lasting just minutes to insert the grommet. An unbearable three hours later I was told I needed to get my partner Cairan to the hospital and we were given the devastating news that Harry had a brain tumour.

My whole system closed down as I went into shock. We felt complete and utter devastation. I racked my brains to think if there had been any signs, anything at all, any tiny little signal, that would have meant we would have known about this sooner; but of course there was nothing. That is one of the most extraordinary things: there were no headaches, no signals.

Harry is an extremely bright child. He taught himself to read before he started to talk. He can speak Welsh thanks to subtitles on BBC programmes and he has a near-photographic memory. He was non-verbal until just after his fifth birthday when, just as we were getting all kitted up with IT aids to help him communicate, he started speaking. It was mainly phrases he had picked up from the TV – sometimes they were entirely inappropriate for the situation which would make us laugh.

It was his delayed speech which lead to his diagnosis with autism spectrum disorder (ASD). Like many kids with this condition, he finds it hard to communicate with others and although he is so bright and very affectionate, he can’t pick up on social cues and therefore comes across as inept in social situations, finding it hard to do what others his age take for granted such as walking up to other children and joining in with them at school playtime.

We have been told his tumour is the “cousin” of Diffuse Intrinsic Pontine Glioma (DIPG), something that the doctors have not seen before, and that it is high-grade so it will be life-changing and potentially fatal as it grows by reaching tendrils out into the brain.

Cairan and I know that we have the fight of our lives ahead of us, Harry is aware that he has something in his brain and his sister Emonie, who is eight and adores Harry, has a good sense of what is going on. The prognosis for kids with DIPG is extremely bleak, it is incurable and treatment options are very limited.

We weren’t long into our brain tumour nightmare when we realised that Harry’s ASD would also complicate his treatment. No-one knows how his autism will affect the way he responds, it will be hard for us to tell if the treatment causes any changes in his behaviour and, of course, he will find it difficult to tell us.

I am shocked to learn that brain tumours are the biggest cancer killer of children and adults under the age of 40, yet so many people still think it is leukaemia which is killing more of our precious children than any other form of this hideous disease. I am angry to think that Harry will have to live away from the security and comfort of his own home during treatment because of shortages in radiologists where we live; being able to sleep in his own bed and have his own things around him every night would be such a comfort. I am frightened to think of what lies ahead, of what affect the radiotherapy will have on him, of how he will feel dreadfully sick yet extremely hungry due to the steroids which he must take to control the swelling in his brain.

We don’t yet know if Harry will need a general anaesthetic for his radiotherapy but, if he does, it will be diabolical for him to have to suffer this additional daily burden to the treatment itself. The radiotherapy must be delivered with pinpoint accuracy so he will wear a mesh mask – decorated with the face of Spider-Man, his favourite superhero – which will be bolted to the table to ensure he remains completely still. Harry’s ASD means he suffers from involuntary twitches and so his mask will be elongated to also cover his shoulders and part-way down his arms. I hope that this will help to calm him as well as fulfilling the purpose of ensuring he remains still.

As I get ready to uproot Harry and take him up to London where he will have radiotherapy at University College Hospital five days a week for six weeks, we know that not all children respond to treatment. After that the pathway is, sadly, one of rapid deterioration and the average survival time after diagnosis is just nine to 12 months. At this stage, we cannot begin to think what may lie ahead if this doesn’t work. 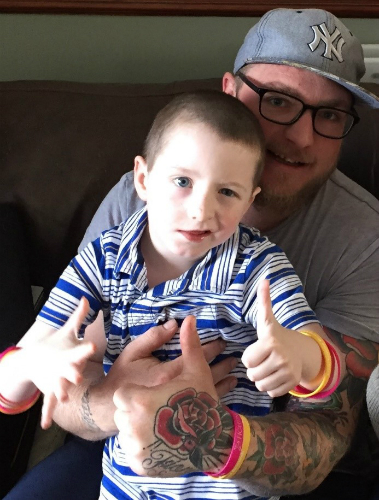