Musician Harry Mockett, 20, from Northampton, was diagnosed with a craniopharyngioma in May 2018, after suffering from vision problems. The tumour damaged Harry’s pituitary gland and he developed life-threatening complications from the surgery he needed to save his life. Thankfully, with the support of parents Sue and Ian, and sister Rosie, Harry is now doing well and is looking forward to releasing his debut EP ‘H.I.M.’ in June 2019.

It’s almost a year since my brain tumour diagnosis and, looking back, I can’t believe I endured what I did. I suffered from life-threatening complications from the surgery I needed to save my life, and the whole experience seems like a blur. As my pituitary gland was badly damaged by my tumour, I have to take daily medication to balance my hormones.

I was extremely grateful for the support of Rosie, my mum and dad every step of the way. Music was also a huge part of my recovery and focusing on recording new tracks gave me hope and purpose going forward. I’m looking forward to releasing my first EP ‘H.I.M.’ in June, and playing live shows later this year.

Rosie said: “Our mum was terrified that the tumour would permanently affect Harry’s personality as he was very subdued at first, but I’m glad to say the Harry she knows and loves is back now.”

It was in May 2018 that I noticed things weren’t quite right. I was struggling to focus watching TV and, when I went to Specsavers in Northampton, I was prescribed a pair of glasses, which didn’t seem to help my vision. When I returned to the opticians a week later, I had another examination and was told to go straight to eye casualty at Northampton General Hospital.

Over the following week, I had lots of medical assessments in hospital, but I wasn’t overly concerned. I was booked in for an MRI on the Friday but didn’t think too much of it; I even went on a night out just two days before the scan. When I got the results of the MRI, however, my world was turned upside down in an instant. 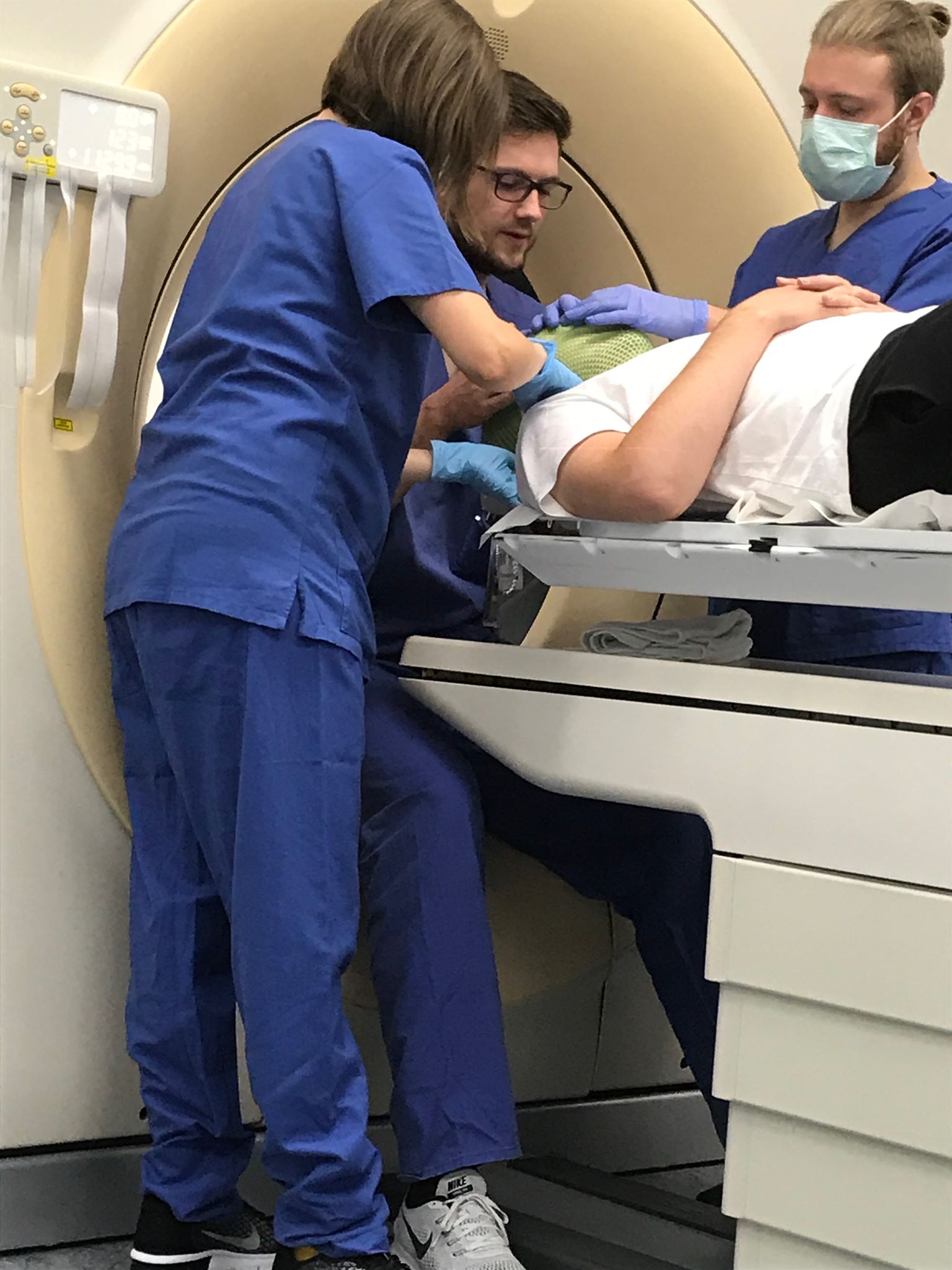 “My mum was by my bedside as we were told the news. The doctors had drawn the curtains around my bed so I sensed that things were serious. They said that I had a brain tumour and Mum burst into tears. I tried to remain calm, to think logically. I focused on how we could fix the situation.”

I was taken by ambulance to the John Radcliffe Hospital in Oxford where I was told that my tumour, a craniopharyngioma, was bigger than a golf ball, and located on my pituitary gland. Any further growth could have left me blind or even killed me so I was booked in for emergency surgery the following day. My neurosurgeon, Mr Simon Cudlip, came in on his day off to perform the procedure; he instantly put me at ease and I knew I was in good hands. 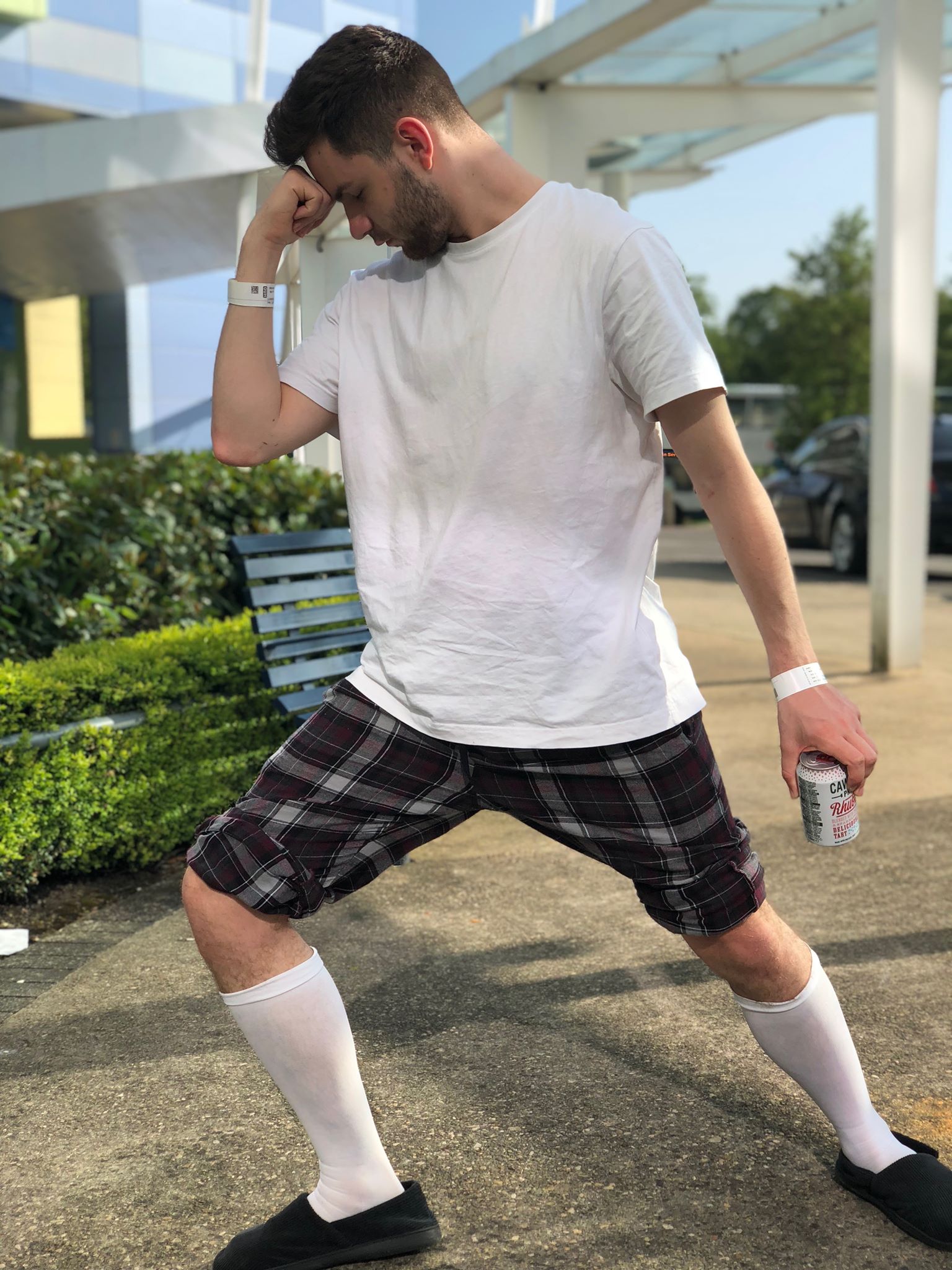 The surgery lasted six hours and 98% of my tumour was removed. When I woke up, it was as if I had a bit of a hangover, but I felt okay. A few days after the surgery, however, I started suffering from complications.

I’d contracted bacterial meningitis and my family were told that I had a 50/50 chance of surviving the next 24 hours. I also developed hydrocephalus – a build-up of fluid on the brain. Over the next seven weeks, I had several operations to treat the complications of my surgery. I was grateful to all my friends and family members who donated to an online fundraising page which allowed my mum and dad to stay in Oxford. This was especially important in the early days, when the situation was very up and down. 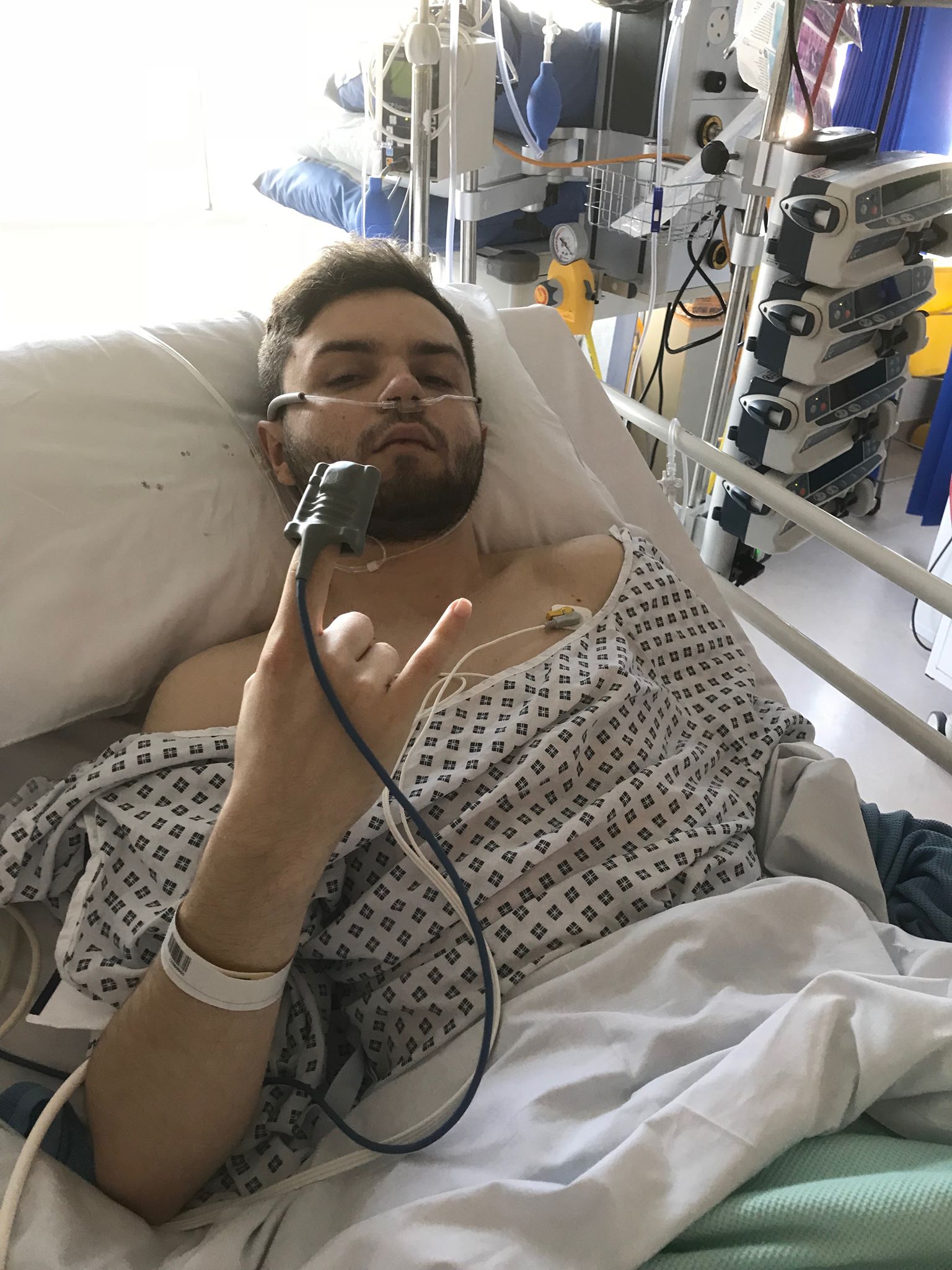 My memory was badly affected by the treatment and I was saying all sorts of nonsense, such as asking Rosie to ‘bring me a McDonald’s in your helicopter’. The quality of care I received at the John Radcliffe Hospital was incredible and I was blown away by its state-of-the-art facilities. 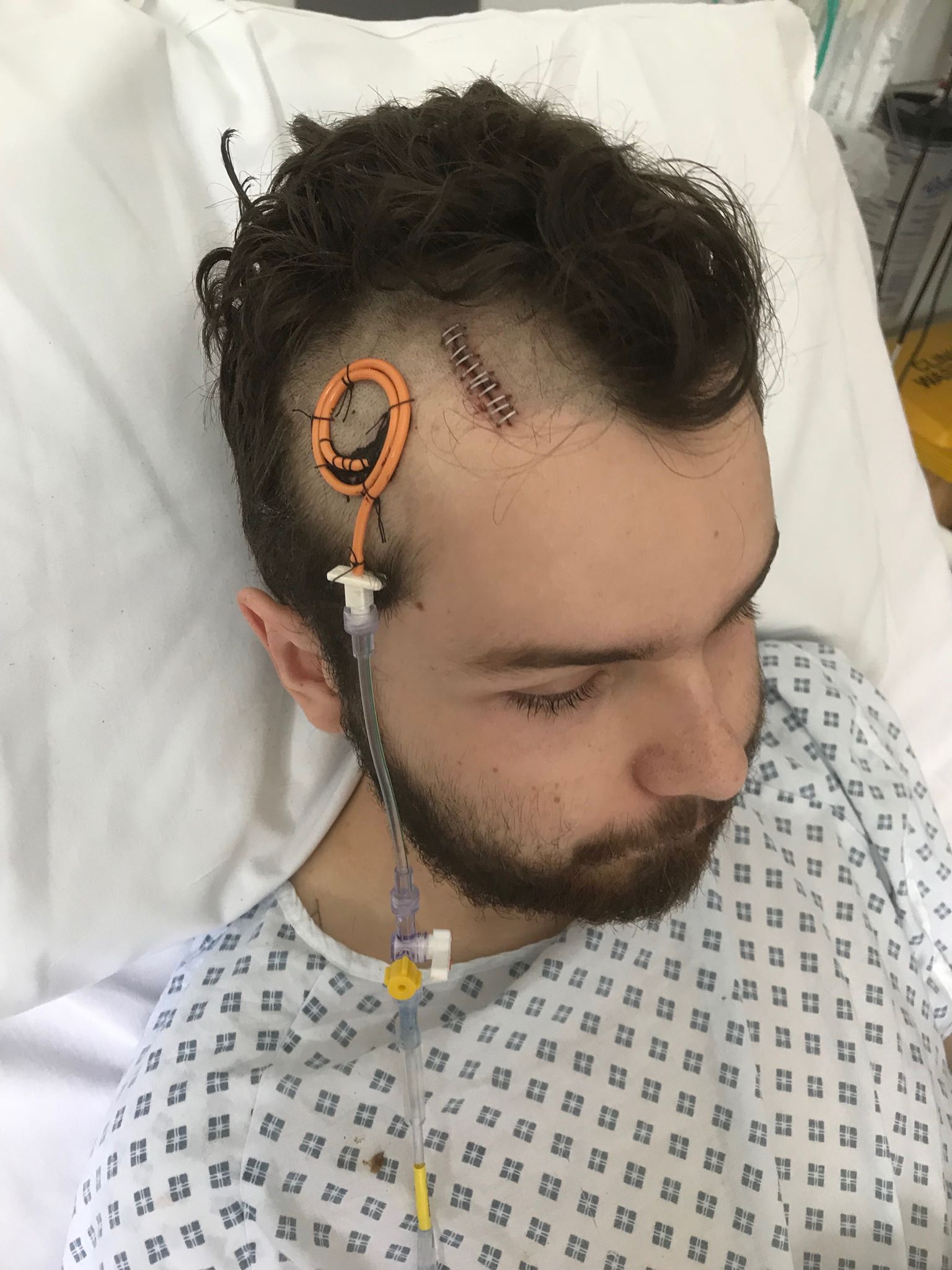 When I was discharged, I was in a lot of pain and, as I’d been bedridden for seven weeks, I felt very weak. Gradually, I got stronger and in October 2018, I travelled to Essen in Germany to have two months of proton beam therapy to tackle the remaining cells of my tumour. There had already been some regrowth since my surgery which was worrying, but I was hopeful that the treatment would work.

Fortunately, the NHS funded the proton beam therapy, so that was a weight off our shoulders, but I was shocked to learn how little funding is invested for research into brain tumours. Historically, just 1% of the national spend on cancer research has been allocated to this devastating disease. My parents took seven weeks off work to stay in Germany and support me and I was surprised at how few side effects I felt from the treatment. I was a bit tired but otherwise I felt fine and I was even able to go to the local Irish bar every Friday night.

“After the treatment had finished, I was thrilled to hear that all of the remaining tumour cells had been removed.”

I returned home in early December and we were able to enjoy an extra special Christmas as a family. In the new year, I focused on recording my music, and the first single ‘Circles’ from my EP was released in February. Music gave me purpose, and while my tumour has damaged my pituitary gland it hasn’t ruined my ability to play guitar. I’m currently recording more music and I can’t wait for everyone to hear what I’ve been working on.

“I had worried that my illness would put an end to my music career but it did the opposite – it helped me on the road to recovery.” 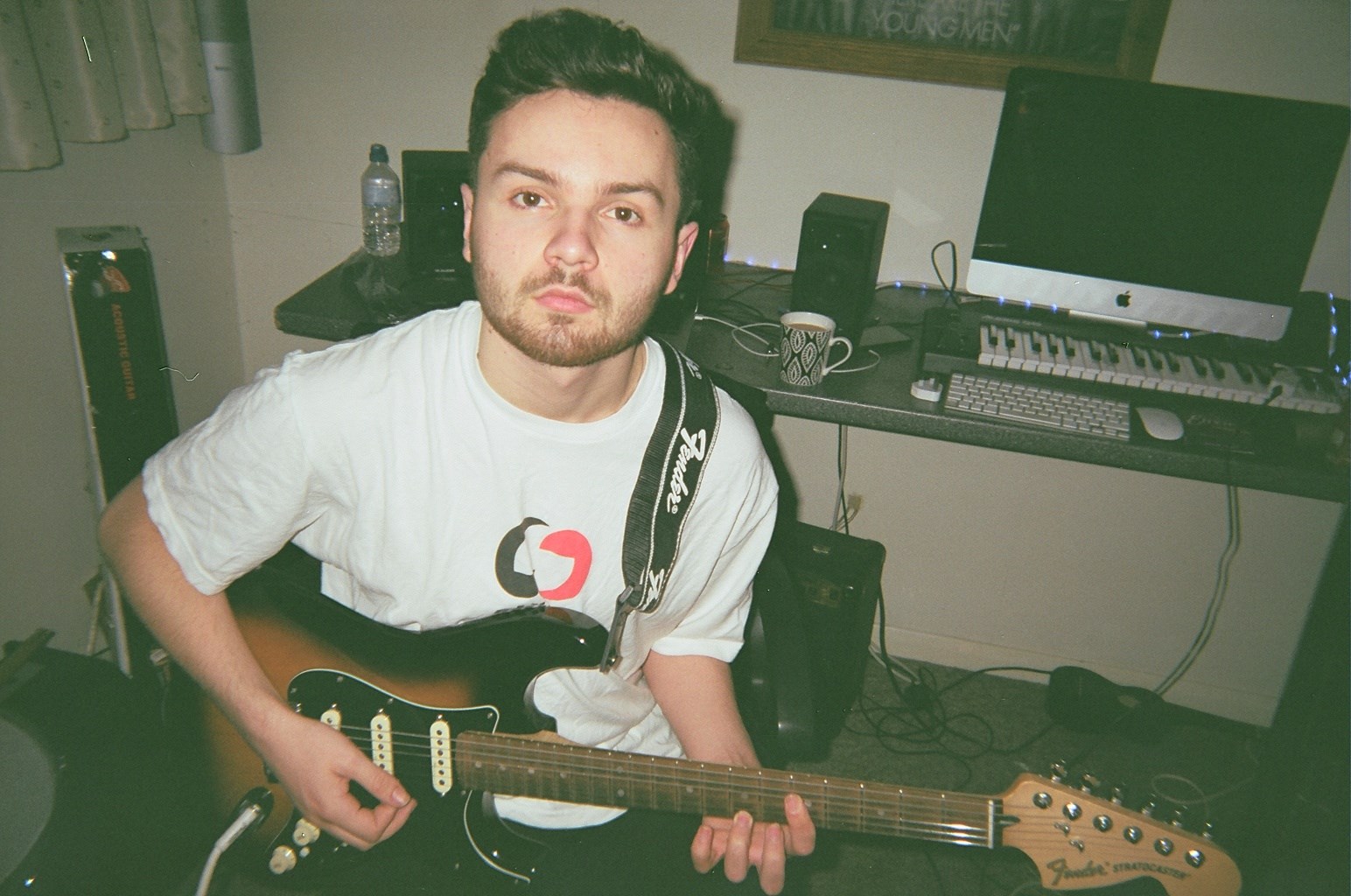 In many ways, being diagnosed with a brain tumour has helped me embrace the positives. It was a terrifying ordeal but I feel like I appreciate the highs of life so much more because of what I’ve been through. I hope that by sharing my story I inspire others who may be going through a similar situation.

I’m grateful for my friends, family and members of the public who donated to two online fundraising pages which allowed my parents to take time off work to support me. Their generosity meant that we could stay together as a family through the darkest of times and words cannot express how much that helped and meant to all of us. I am lucky to be surrounded by some truly amazing people. 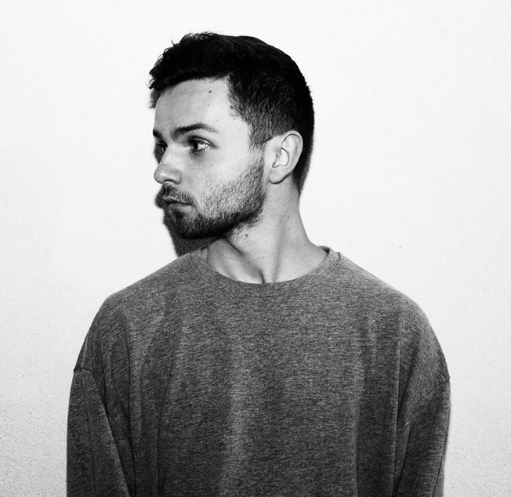