Grace and her husband-to-be bonded over the scars on their skull – she had gone through brain tumour surgery and he had a bone-anchored hearing aid fitted. They are now expecting their second child and, as a patient representative on the Tessa Jowell Brain Cancer Mission, Grace is helping to shape the future for patients.

Although I’m originally from Rayleigh in Essex I went to university in Nottingham, graduating in 2005 before setting off to see the world. I started in Hawaii before continuing to Australia and New Zealand and returning home via Singapore, Thailand, Cambodia and Vietnam.

At the age of 23 I was back in the UK and ready to start a new chapter in my life but 13 days after my return I had my first seizure.

I was with my dad and suddenly I just couldn’t finish my sentences. Dad knew something was wrong and, along with my sister and step-mum, we set off for hospital. On the way the seizures kept getting worse. Dad pulled over and a first responder was called.

“When he arrived, he stopped an ambulance that was passing as I was seizing again – his quick actions saved my life.”

At hospital I was put in a coma and had an MRI scan which showed up a low-grade glioma; I was woken and transferred to Romford then given medication to control my seizures and we were advised the best thing to do now was watch and wait.

My consultant neurosurgeon Kevin O’Neill suggested an awake craniotomy. I know it sounds dramatic and the thought of being awake when my operation was taking place did make me extra nervous but to be honest it wasn’t as bad as it sounded, or I feared, and 85% of my oligodendroglioma grade 2 was removed in November 2009.

“I was back at work after two weeks. Although I was still having partial seizures and couldn’t drive, life went more or less back to normal.”

I have to admit that I was nervous about starting a relationship but I met James online. We decided to meet in person and after spending ten minutes with him at a bar in Clapham he took off his hat and showed me a scar on his head that was there after he had had a bone-anchored hearing aid fitted. I was wearing a hat too that evening and so took it off and said: “You call that a scar?” and showed him the result of my brain surgery. Once we had our disclosures out of the way everything fell into place and it wasn’t long before we were setting up our home in Hornchurch in 2012 and we married in 2013 – I was back home in Essex!

My annual scan in April 2014 scan showed that my tumour had changed and so I needed another craniotomy which finally went ahead after three cancellations. I was awake for this operation as well and so pleased that this time 95% of the tumour was taken however the recovery took longer than before. Two days after the surgery I did have an episode of seizures but thankfully that has been it since.

Because the tumour was assessed now as being a grade 2 with some grade 3, I had radiotherapy and chemotherapy after the operation and lost my hair. My hair came back but it was a bit patchy. I was very sensitive to the radiotherapy and at one point looked like the Andy character in Little Britain! My hair was always my ‘thing’ and the only time I cried during the whole cancer episode was when I once washed my hair after radiotherapy and it came away in clumps. I spent over £200 on a wig but I only wore it twice. I decided to shave my head and I loved the result – I should have done it straight away. I embraced my baldness – I was proud of my cancer status and I didn’t care who noticed – I wore a hat in winter though!

Treatment finished in July and then the following January we moved to Dubai for James’s work and it was there, in June, that I became pregnant. I has always wanted kids, and James did too but I did have to ask myself would it be selfish to have a child? I have never let my tumour define me and after talking to my neuro team I decided that as no one knows what is around the corner and that we should behave as we wanted. Becoming a mum felt right.

James and I decided we needed to return to the UK where in Colchester, in February 2017 Isaac was born; he is now heading into the terrible twos. As a new mum, I wanted the support of my family and, as they had all moved to Norfolk, we moved there to join them.

“My days are filled with the joy of motherhood and country walks with Dodger the dog. I’ve had no seizures for four years and I’m driving again too.”

I think of my life now as a new normal. Surgery has affected everything: I’m not as articulate as I once was; I don’t enjoy reading the way I used to, and I have lost my quick wittedness. However, life is good, I have an amazing family, a caring husband and a gorgeous, miracle baby boy.

I have always supported and been supported by the charity Astro Fund – one of the Brain Tumour Research charity’s Member Charities - and I think I have always wanted something about my brain tumour experience to live on, to be a legacy, that may be of help to others. So, when Katie Sheen from Astro Fund approached me about being on the Tessa Jowell Brain Cancer Mission I was honoured – if a bit overwhelmed. It’s really good and, although a lot of the talk by the scientists and clinicians is over my head, I am happy to add my experience as a brain tumour patient as it is so important everyone on the mission really understands the patient perspective. Jess Mills, Tessa’s daughter is lovely. I really think that together we will make a difference.

Since being on the Brain Cancer Mission I have lost three stone at Weight Watchers although I don’t think the two things are related! I just wasn’t enjoying clothes shopping and decided to do something about it. My new normal means that I think about my tumour every day and when I get a headache, I can’t help but think about the tumour returning rather than I’m just a bit dehydrated or need to open a window. My new normal is about to change again soon as I am six months pregnant and Isaac will be getting a baby sister in June.

My brain tumour doesn’t define me. My family and my life do. 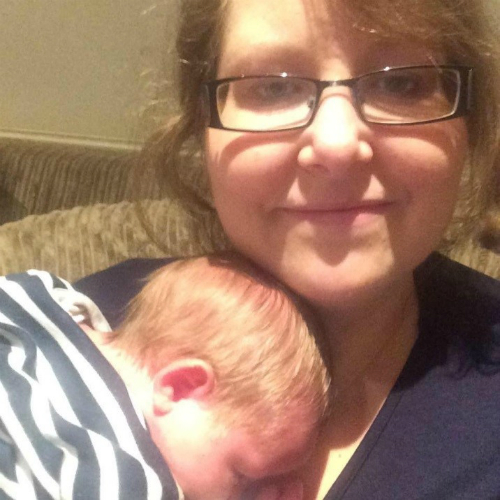