A healthy 15-year-old, Grace found herself with the devastating diagnosis of a brain tumour after a short bout of headaches, dizziness and vomiting.

After undergoing surgery, chemotherapy and radiotherapy to eradicate her medulloblastoma, Grace has now been clear for seven years, and is a nurse, inspired by the amazing care she received during the battle with her tumour.

“It’s a totally devastating thing to lose your hair when you’re 15 when the way you look is so important.”
Until March 2009, life was pretty normal.  I was active, danced twice a week and was part of an athletics team.  I was 15, in the first year of my GCSE studies at school, with lots of friends.

It was at this time that I started to suffer with really bad headaches.  They weren’t like normal headaches, my head pulsated with pain, and it seemed to be coming from the base of my skull.  Until this point, I never really got ill, so when I started feeling dizzy, I realised there must be something wrong.

My GP told me it was a virus going around and it would work its way out of my system.  But the headaches became more frequent, the dizziness continued and I started vomiting, so we went back to the GP, this time to be told it was possibly diabetes.

A test showed my blood sugars were normal, so another trip to the GP resulted in a migraine diagnosis.  The medication prescribed for the migraine just knocked me out and did nothing for the symptoms, so I continued to feel ill.

On the Friday evening, I was sick again and fainted.  Mum and Dad took me to the walk-in centre at Milton Keynes General Hospital, who thought I had an inner ear infection and prescribed antibiotics.  These didn’t work either, so on Monday I returned to the GP yet again.

In the space of two weeks I had seen my GP five times.  She decided it was now time to find out what was really going on, and referred me to the hospital.  There I had numerous blood tests and an MRI scan.

As I had never had an MRI scan before, going into the scanning room was very daunting, the machine was huge and noisy.  When you’re in the MRI scanner, there is a small mirror above your eyes pointing to the windows facing the radiologist.  It’s almost impossible not to look, and I could see them talking animatedly and pointing at the screen.  To be honest, I felt relieved, I knew they had found something and thought now this would all be over, but unfortunately, I had no idea of the enormity of what I was about to be told.

After the scan, Mum and I were called into a small side room.  They told us they had found a lump on my brain.  The first thought that came into my head was “cancer”, I was more scared of the word “cancer” than the words “brain tumour”.  We were then transferred to the John Radcliffe Hospital (JRH) in Oxford for a biopsy and further tests.

The MRI scan found that the tumour was causing a blockage of my cerebrospinal fluid, which in turn was causing the headaches to worsen.  The day after being admitted to the JRH, I underwent a procedure to release this fluid, and have a drain inserted into my head.

Five days later the tumour was operated on and a biopsy done of the tissue which revealed it to be a cancerous brain tumour.  I was told that my tumour was a grade 4 medulloblastoma and, because of its position, they had only been able to remove 70%.  I was also told I would need two rounds of chemotherapy, aiming to reduce the remaining 30% so they could take it out with further surgery.

Mum and Dad were there with me 24/7.  I have no idea how I would have coped without them.  The hospital was amazing and I had someone stay over every night so I was never alone.  The doctors and nurses were fantastic and I couldn’t have wished for better care.

On my first day of chemotherapy, my consultant came in to see me.  I asked him “what are the chances of the chemotherapy eradicating the tumour completely?”, and he replied that it was very rare that this would happen and that he was expecting the treatment to reduce the size of the tumour so that more surgery could go ahead safely.  Determined, I said to him “Mine’s going to go!”.

Initially, I had two rounds of chemotherapy.  It was three days on, two weeks off. It made me very sick, I literally just had to lie in bed on the days when I had the chemo.  During the two weeks off, I felt a little better, but was still very tired and had terrible restless legs and cramp.

But the physical toll was nothing compared to the emotional one.  I had really long, thick hair before my chemo.  Despite being warned that my hair would fall out, I just couldn’t bring myself to cut it short.  I should have done, because one evening I was taking my hair out of its ponytail and it came away in my hand, the whole ponytail.

It’s a totally devastating thing to lose your hair when you’re 15 when the way you look is so important.  And then to lose my eyelashes and eyebrows too, so awful.  That was honestly the worst part of my treatment, losing my hair. I could cope with being sick but when it affects your whole appearance; that has the most impact.

I was lucky to have support from a psychologist during my treatment.  I don’t think I was overly depressed or anxious, but there were times when I just wanted to cry and cry.  I’m told this is completely normal, and having someone to talk to made it better.

After the two rounds of chemo, I had another MRI scan and the tumour had shrunk to just less than 1cm.  Even though my confidence had been totally battered by the loss of my hair, I was really pleased that the chemo was working.  I was then told I needed another two rounds of chemotherapy to get rid of it completely.

Mum took me to get a wig so that I could go back to school. It was an amazing wig, and it looked just like my own hair, but I hated the thought of it.  Most people probably didn’t even know it wasn’t my hair, but I knew.  I thought everyone could tell, and I was so self-conscious.  Only my very close friends knew the truth.

The school were great, they allowed me to come in late and go home early to avoid the bustle of the crowds to and from the building, they gave me help after hours if I needed it, and sent work home if I was too ill to come in.  Their support was so essential to me in the lead-up to my GCSE exams.

The second two rounds of chemo were much like the first, except this time I had no hair to lose.  I was sick, tired, restless, but thankfully I had great support from my friends and family.  They were incredible.  A further MRI showed the tumour had gone completely.  My consultant said to me “You told me it would go! Well done you!”.

I had a Hickman line inserted as part of the chemotherapy, and unfortunately it became infected.  After the second two rounds of chemo, Mum and Dad took me on holiday to Cornwall to recuperate before radiotherapy started, but I had to keep going to Truro Hospital during that week for antibiotics to treat the infection.

After a six-week break, I then started six weeks of radiotherapy at the Churchill Hospital in Oxford.  During radiotherapy, five days out of seven I went to school in the morning and had radiotherapy in the afternoon.  Because the tumour had affected my cerebrospinal fluid, they applied it to my spine as well, so beforehand I had to have a keyhole procedure to clip my ovaries out of the way to make sure they weren’t affected.

The radiotherapy was horribly aggressive, on my head and my spine.  It made me feel awful, worse than the chemo.  I was really tired, and just didn’t feel like myself at all.  The doctor said this was quite normal, and I just had to give it time.  It took a good few months before I felt like myself again.

In December 2009, after surgery, four rounds of chemotherapy and six weeks of radiotherapy, I had another MRI. I finally got the ‘all clear’ on the 22nd December which was a pretty good Christmas present!

Despite going through all this, I sat my GCSE exams in 2010, and I came away with grades A to C in all my subjects.

For the next two years, I had MRI scans and consultations every six months.  As these had all been clear, they moved my scans to yearly for another three years and in October 2012 I finally received the five years all clear. I now attend the late effects clinic at the Churchill Hospital.  There, I have access to oncology, psychology and endocrinology, so if I have any concerns or health niggles, I can discuss it with the experts.

I’m not entirely the person I was.  Radiotherapy permanently damaged a 5-inch square patch of hair follicles on the back of my head, and I have to wear a hair piece.  I’ve spoken to experts about hair transplantation, but I’m not a candidate because the area is too big, and another doctor using stem cell treatment for hair growth said I couldn’t take part because it might reactivate the tumour.

Brain tumours are the biggest cancer killer of children and adults under the age of 40, and I’m lucky that I didn’t become one of those statistics.  You don’t expect to be diagnosed with such a devastating disease when you’re only 15.  When you realise that only 20% survive more than five years’ post-diagnosis, I really feel blessed.

During my time in hospital, I was treated by the most amazing nurses and doctors.  It was that experience that inspired me to go into nursing and be like the ones who cared for me.  I went to Bedford University to study adult nursing, and I now work at Milton Keynes General Hospital on the oncology and haematology ward.  I’m hoping to eventually move into chemotherapy nursing – I can relate to what those patients are going through, and I want to provide the level of care that I had during such a devastating time.

I also want to help others by raising money for research. Only 1% of the national spend on cancer research is allocated to brain tumours, and it’s not enough.  I am planning a charity ball for March 2017 to raise money for Brain Tumour Research, and I hope this will become an annual event.  Research is the only way to find a cure. 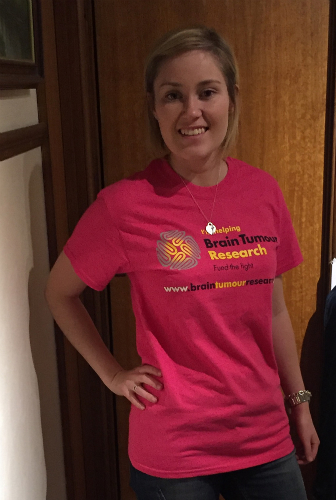