In April 2008 George became ill and was diagnosed with a brain tumour. George underwent over 80 weeks of treatment including multiple operations, chemotherapy and radiotherapy. George and his family started fundraising in August 2008 and have raised over £32,000.
In April 2008 George became ill with headaches and vomiting.  He was also falling asleep at school.  We took him to the doctor, who wasn’t unduly worried and said it was quite common for children of his age.

At the end of April, George became quite unwell while on a junior Rugby Tour with Wetherby RUFC and his condition appeared to worsen over the following week.  After another trip to the doctor, we were referred to Harrogate Hospital. I remember thinking “we shouldn’t be here – George isn’t that poorly.”

On the 25th April 2008, our world changed.  Following a MRI scan, we were taken into a small room where George’s mum and I were given the devastating news that George had a brain tumour.  We then had to tell George – I don’t know quite how we did it. He seemed to take it in his stride and was just pleased that they had discovered the problem so that he could feel better and play Rugby again.

Within an hour, George and his mum were in an ambulance being rushed to Leeds General Infirmary, with me following in the car.  I remember having to phone the family to let them know – and not being able to get the words out. I was convinced we had lost George and that our world had ended.

George underwent over 80 weeks of treatment, including multiple operations, chemotherapy and radiotherapy.  What I did not know at the time, was how rare brain tumours are – we were so lucky to be diagnosed so quickly. It just so happened that the consultant we saw had diagnosed another boy from Wetherby 6 months before.  I subsequently found out that this one took nearly 3 months to diagnose.  With the number of children’s brain tumours being less than 300 per year nationally, the truth is that most doctors won’t come across one.

While he was in hospital, George saw other children who were worse than himself and wanted to do something.  This was the inspiration for us to start fund-raising and because we had been put in touch with The Candlelighters Trust, a Yorkshire based children’s cancer charity which provides practical, emotional and financial support to children living locally with cancer and their families, we decided to fundraise for Candlelighters, who also fund vital research into new treatments and cures.

We started fundraising in August 2008 and have already raised over £32,000 through a wide range of activities including fun runs, charity balls and sponsored swims, and hope to make it £50,000 by Christmas.  Many people have been inspired by George’s story and he recently became the Stray FM Ultimate Hero for 2010.

About 14 months ago I became a trustee of Candlelighters, which, together with another local charity, Andrea’s Gift (a member charity of Brain Tumour Research), has recently co-funded a brain tumour research laboratory in Leeds for the next five years.

The impetus which keeps George and I going with our fundraising is seeing that brain tumours and other childhood cancers don’t get the results that other cancers do.  Brain tumours are the biggest cancer killer of children, but brain tumour research gets the least amount of funding.  This is what makes me absolutely determined to try and help to do something to reverse this situation. 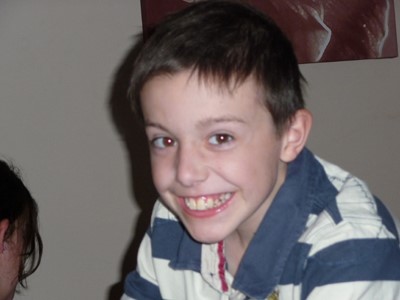