When 12-year-old George began having headaches, soon also accompanied at times with vomiting, alarm bells rang for his parents. They suspected he might have a brain tumour, but their fears were brushed aside and his symptoms put down to migraine. However, the couple persisted with getting a diagnosis and three weeks after he first became ill their worst fears were confirmed. Devastingly, biopsy results following surgery revealed George’s brain tumour was an aggressive glioblastoma multiforme (GBM).

Here is George’s story as told by his mother Louise …

George is our bright, inquisitive, middle child of three; the adoring younger brother of Jamie, 17, and proud, protective big brother of Isabella (known as Issy) who is just 19 months younger than him. He’s a really kind and mature boy with an ability to empathise way beyond the average 12-year-old. 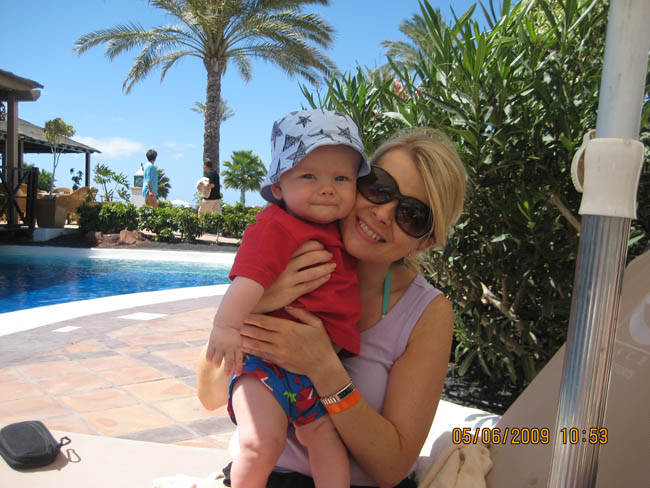 “Our family fondly refers to George as ‘Gorgeous George’ as he’s caring beyond his years and gorgeous inside and out.”

George is passionate about Arsenal FC and loves going to watch matches with his dad, as well as gaming and Lego. He also loves spending time with family, including his aunt, uncle and cousins.

My husband Matt and I felt so blessed to have a healthy, happy, close-knit family who enjoyed walking our dog and having fun together, as well as lovely holidays – at least until the onset of the coronavirus pandemic last year. 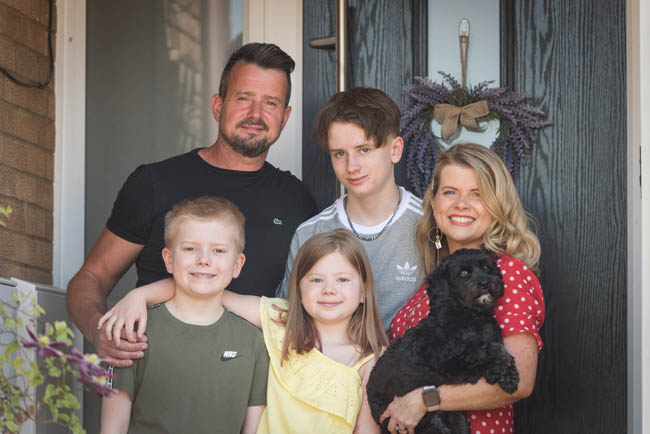 Everything changed just a couple of months ago. In early April 2021, George started struggling with bad headaches, which he hadn’t experienced before. We took him to the GP who put it down to migraine and we also had him checked out at the optician. Six days on, George started vomiting too, which rang alarm bells as we were aware that this could be a symptom of a brain tumour. We took George to A&E at Luton and Dunstable Hospital and expressed our concerns. They tried to reassure us that his headaches and vomiting were down to migraine, but agreed to refer him for a scheduled routine MRI scan.

With his symptoms persisting we took George back to the GP and even rang for an ambulance on one occasion, which didn’t turn up. 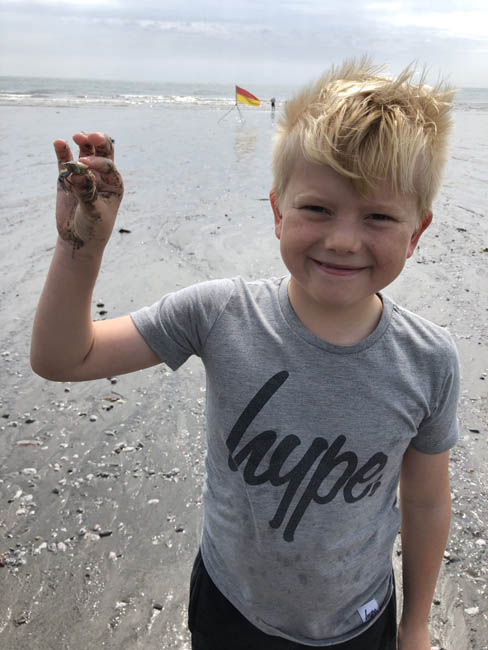 On 26 April, we took George to A&E again and pleaded with them to check him for a brain tumour, but although they at first led us to believe they were going to scan him, this didn’t happen and they were satisfied he could wait until 29 April – the date of the scheduled MRI scan.

On the day of his MRI, the technician conducting George’s scan came to ask me if I would consent to him having a scan with contrasting dye. I realised straight away this wasn’t good news.

Shortly afterwards, a consultant asked me to accompany him for a chat. He allowed me to call my husband to join me inside the hospital as he hadn’t been allowed in due to COVID restrictions. When we got downstairs, there was a huddle of doctors and nurses and they ushered us into a side room. They told us that the scan had revealed a substantial brain tumour – exactly as we had suspected all along. It was 5cm across and in a very difficult location. They also said it looked like cancer and that George needed to go to Addenbrooke’s that night by ambulance.

“Our world literally fell apart. It was totally devastating and upsetting that George had been forced to suffer so badly for around three weeks because doctors wouldn’t listen to our concerns, even if it wouldn’t have changed the outcome. We went into a very dark place that we wouldn’t wish on any parents.”

Matt went home to pack a bag, but then we got told he wouldn’t be able to join us at Addenbrooke’s and that George and I had to go on our own because of COVID rules. It made it even more scary not having Matt with us.

George arrived at Addenbrooke’s and was put on steroids to reduce the build-up of pressure within his skull.

Amazingly, we quickly felt we were in really safe hands under the neuro team at Addenbrooke’s. George seemed to have a fantastic neurosurgery team who spent a lot of time and care putting together a plan for how they were going to operate, taking into account the position of the tumour. Brain surgery requires inestimable precision because of the very real risk of life-changing consequences or worse.

“We had utmost trust in George’s surgeon Tom Santarius. He explained the terrifying risks, but we knew we had no choice if we wanted to save our boy and find out exactly the type of tumour we were dealing with.”

George’s craniotomy went ahead on 6 May. The 10 hours he spent in the operating theatre were horrendous, seeming to stretch on into eternity. Fortunately, Matt was allowed to join me at the hospital while George was in surgery and we walked around the outside of the building in a circle for around five hours in a complete daze. Initially we had been told the surgery would take around six hours, so the last four hours were agonising. 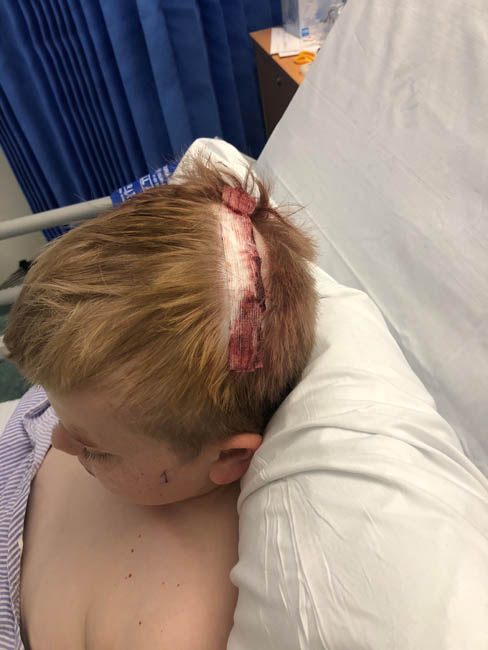 “Finally, Tom was telling us that everything had gone ahead as planned, in fact even better, because instead of realising their aim of removing 80% of the tumour, the surgeons had actually succeeded in removing 99%! We were totally elated.”

On top of this, George hadn’t suffered any adverse effects from surgeons probing around within millimetres of healthy tissue which could have left him paralysed for life or worse. As soon as we saw George in recovery, he started making us laugh. He recovered in leaps and bounds. By the following morning George was out of bed and taking small steps. We felt uplifted, positive and grateful; full of hope for the future. However, we still had no idea as to what type of tumour we were facing.

True to his caring nature, George was more concerned about his mum and dad getting enough sleep than himself, suggesting to nurses while he was in Intensive Care that Dad should be sent home to get some rest!

Incredibly, George was allowed home after a few days as he was making such an amazing recovery.

On 19 May, we met with the oncologist for the histology results and were given the earth-shattering news that George had an aggressive glioblastoma multiforme (GBM). This type of brain tumour is the most common, primary high-grade form in adults, but it is rare in children and there is no cure.

We were told that radiotherapy would help to hold it at bay, but to go and enjoy our time with George.

“I will never ever be able to describe the dark place that my husband and I were in that day; broken does not even come close.”

We quickly learnt that treatments for GBM on the NHS have barely changed in decades and it is ‘a one size fits all’ approach. We realised that to give George the best chance we needed to look abroad to Germany and the United States for pioneering treatment. However, this kind of treatment along with the expense of travel and accommodation for weeks or months on top comes at a huge cost of around £250,000. 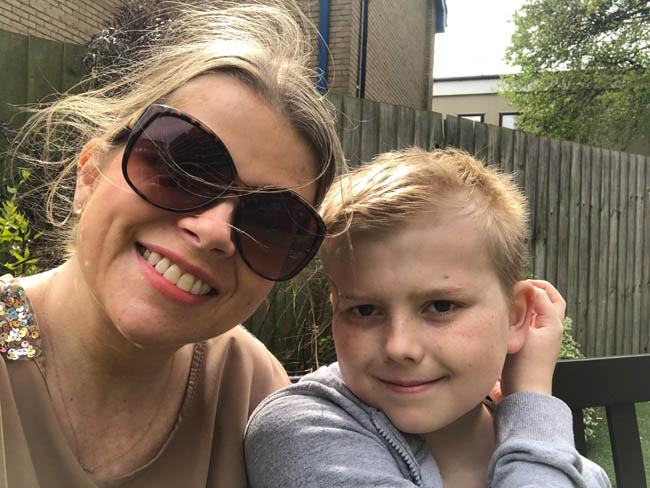 Added to the enormous expense, Matt, a builder, and I, a training manager for Avon, have stopped working to spend precious time with George, so we decided to launch a crowd-funding appeal. Incredibly, the total now stands at more than £500,000 with donations from around 3,600 people, many of whom we have never met or may never be able to thank and every day more donations seem to come in and the total creeps up.

We are blown away by the generosity of friends, family and complete strangers and the outpourings of love and kind messages. We are also so grateful to Brain Tumour Research for helping us raise awareness and for striving to find more effective treatments and ultimately a cure so families don’t have to look abroad for help, like ours. 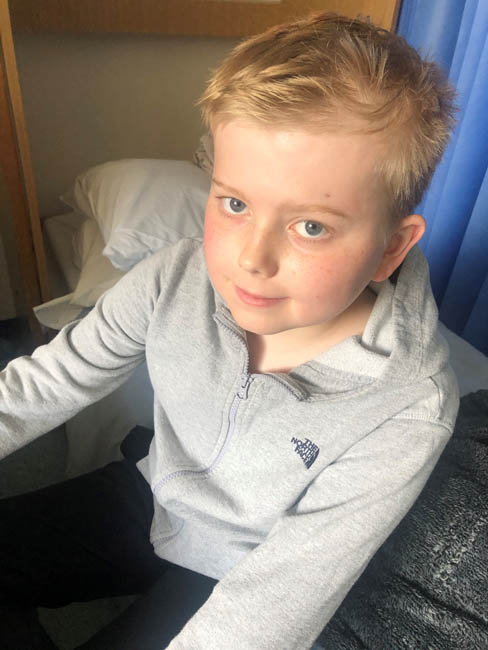