When 58-year-old Gaynor Farrington, from Liverpool, started suffering from cramps and pain in her neck and shoulders, she never suspected she had symptoms of a brain tumour. It was only after a terrifying seizure at work that she discovered she had a meningioma. Her tumour was low-grade and operable but following surgery, Gaynor contracted a bone flap infection and had to have part of her skull removed. She is now awaiting a further operation to replace the missing bone flap. In spite of her ordeal, Gaynor says she feels extremely lucky and has a new-found appreciation for life.

I’d been having experiencing cramps in my body for a year or so before I got my brain tumour diagnosis. I also suffered with a lot of pain in my neck and shoulders. Sometimes, I would suddenly get a strange feeling that I was going to faint but then it would go. I went to the GP and was prescribed quinine for the cramps but when I read that it could affect my eyesight, I lowered the dose.

Everything came to a head on 12 April 2019. I was in one of the nursing homes where I work as a self-employed footcare practitioner. I was sitting on my knees treating one of the elderly residents when I suddenly my left ankle began to tingle and eventually became numb. The tingling sensation then spread up the left side of my body, reaching my head. I managed to get up but couldn’t walk unaided and I told one of the carers in the room that I needed urgent help and they called an ambulance for me.

“It was really terrifying. You imagine all sorts of things might be wrong with you but I never imagined it would be a brain tumour.”

The emergency call handler on the phone to the carer was asking me to carry out various basic tasks, to try to ascertain more about my condition. Although I felt as if I was communicating perfectly lucidly, I couldn’t articulate a sentence properly and was slurring my words. They suspected I’d had a stroke and I was taken by ambulance to Royal Liverpool Hospital for further tests.

At the hospital I was given steroids and I had a CT scan, after which I learned that I had a brain tumour just above my right eye. It may sound odd but I was quite relieved. If I know what I’m dealing with, I feel better. The other thought I had was: ‘thank goodness it is and not someone very dear to me, such as my son Christopher or my partner, Robin’.

“Luckily, the steroids took effect almost immediately and I was able to stand again, which was a marvellous feeling.”

I was discharged after a few days and met my consultant neurosurgeon, Mr Brodbelt, at the Walton Centre, where I would be having brain surgery to remove the tumour. Robin came with me for my appointment and Mr Brodbelt showed us the images from my scan on his screen. It was apparently two inches long. I was fascinated by the images but I look at Robin and he was in tears, which made me feel awful. He’d had cancer in a gland next to his kidney and it was difficult for him to deal with my diagnosis. A day was set for my surgery on 14 May 2019.

In the period between my diagnosis and my surgery, I was determined to have as much fun as possible. I could no longer drive but Rob kindly took me to see Christopher and his fiancée Lauren on the Isle of Skye, driving more than 450 miles, even though he had sciatica. We had a wonderful time all together, enjoying walks and games of pool in the pub. One night I even played pool with the landlady’s dog, which was hilarious! It was a really special trip that I will never forget. 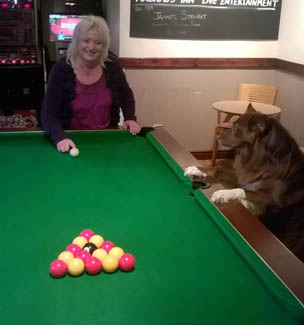 Having discovered I had a brain tumour, my outlook on life changed almost overnight. It was like I was previously looking at life through dirty glass, then suddenly everything became very bright, almost technicolour. I remember setting off for the Isle of Skye at sunrise noticing just how beautiful everything looked. Since then, I haven’t stopped seeing the beauty in nature and the world around me. 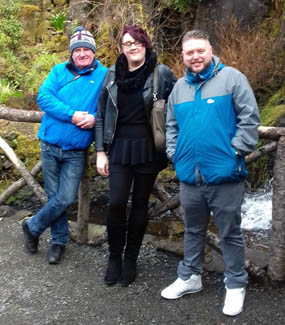 The day before my operation, we went to do some gardening at the Boote Home for Cats, where I volunteer. I’m the odd job person and gardener. Christopher and Lauren were staying with us and we also went to do a bit of retail therapy on Lark Lane. I bought myself a lovely new dress to go out in that night. What I didn’t want was to be sitting at home feeling sorry for myself, with lots of people coming to visit. Instead, we went out for a Thai meal and I treated everyone. When we got home, I got ready for bed and took a sleeping pill, to make sure I got a good rest before my operation. I slept well and woke up the next day feeling fresh and ready.

“My surgery last around four hours and I had wonderful care from all the staff I encountered at the Walton. They were absolutely amazing; so caring and supportive.” 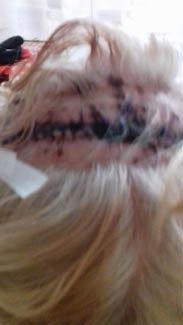 I was allowed home after three days with anti-seizure medication and steroids. The steroid medication made me feel really hungry and I couldn’t sleep and sit still for long. Other than that, though, I recovered well from the surgery and was soon back on my feet. One really lovely thing to come from my diagnosis, was that it made me realise just how loved and cared for I am. I was completely taken aback by all the kind wishes and support from my family and friends. Even some of my clients and their families sent gifts and flowers. It’s funny how it can take something so extreme to make you realise just how valued you are.

A district nurse came to take my stitches out. I told him that I hadn’t yet received the results from my biopsy and he encouraged me to ring the hospital to try and find out. I took his advice but when I rang, they said they didn’t yet have the results. Up to that point, I’d been feeling positive but the fact I was waiting longer than I expected began to make me feel anxious and I over-analysed the situation, wondering whether the long wait meant it was bad news.

“Then, three weeks or so after my operation, I had a set-back, when I suffered a major seizure. I was sitting on my own in the garden enjoying the sunshine when it happened.”

Robin was out. Suddenly, I had the funny feeling again in my left ankle. I quickly got indoors then I collapsed in the sitting room and couldn’t reach my phone. My left arm was twisted so badly and I was shaking uncontrollably. Rob came back and called an ambulance, which unfortunately took more than an hour to get to me. Rob was trying to get me to lie down on my back but I couldn’t, it was too painful. I told him I thought I was going to die. He stayed by my side, reassuring me and telling me that I needed to hold on, as he wanted to take me on holiday to Greece, a destination I absolutely love.

Eventually the paramedics arrived and I was taken back to Royal Liverpool, where I stayed for a few days. Getting myself dressed was very awkward, especially fastening my bra strap, but I persevered until I could do it. I spent a lot of time practising painting my nails, to try to improve my dexterity. I also had to learn to write again and with persistence, I managed it. During my stay in hospital, I received the wonderful news that my tumour low-grade. The results from the histology report confirmed it was a grade 1 meningioma. It was a huge relief to know that I wouldn’t require any follow-up cancer treatment and that my prognosis was good. 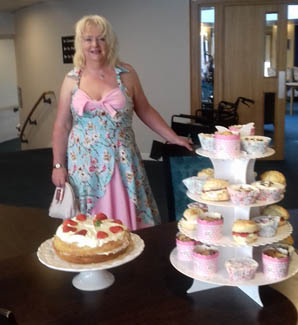 I was discharged from hospital and after a few more weeks recuperating at home, I returned to work and to my volunteering at the cats’ home. In August 2019 I was even well enough to help organise a charity afternoon tea event at the care home where my sister works. Life was getting back to normal and I was feeling really good. Initially, I was being scanned every three months to monitor my brain but the scans reduced to six-monthly over time.

“On 17 October 2019, I was attending an outpatient’s appointment before going into work one morning, when things took an unexpected turn.” 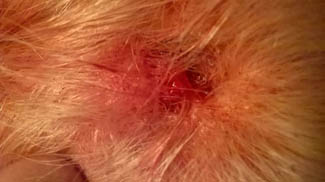 The doctor who saw me realised that I had a wound breakdown was told me that I would require further surgery. I was particularly shocked when he said that I would need to be admitted that day. The same night, I had a partial skull removal to halt the infection in my bone skull flap. It was really upsetting, as it’d happened so quickly and I felt totally unprepared. However, once again the fantastic team at the Walton was there to support me through it, as were my family and friends. What’s really strange is that I’d had a premonition about the number ‘17’ and had suspected that something significant would happen on the 17th of the month. How right I was!

The morning after my operation, the surgeon came to see me and saw that there was a lot of watery blood on the pillow. It needed stitching up but the surgeon advised that an anaesthetic injection would have to go through the muscle and could cause nausea, so I encouraged them to do it without pain relief. I used mindfulness techniques to take myself off to a Greek beach, where a Chinese lady was giving me a massage. Through meditation, I transported myself away from the hospital bed and I barely felt a thing.

“After a week’s stay in hospital and a heavy dose of antibiotics, I was able to go home and gradually get my life back on track.”

I’m back at work and driving again. Any day now, I’m expecting to hear about my next (and hopefully final) surgery, which will be to replace the bone skull flap that was removed. I feel quite vulnerable knowing that there is a piece of my skull missing at the moment. Although it’s not visible, due to my thick head of hair, I worry about knocking my head and I’ve had a couple of near misses.

Life is really good now and I’ve never felt luckier to be alive. Motivated by my experience, I am training to become a hypnotherapist. I am so very grateful to be here and to have such wonderful people in my life. I feel very lucky, as I know many other brain tumour patients face much bleaker outcomes. By sharing my story, I want to give hope to others dealing with a similar diagnosis and to help raise awareness of the disease. 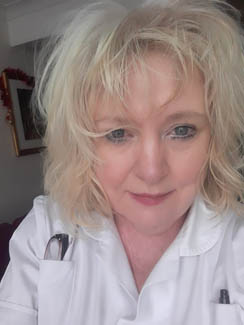