Father-of-two Gary Robinson marked his 34th birthday in May 2015 by running the Manchester 10K to raise money for Brain Tumour Research. It was the first such event he had taken part in and it came just months after he underwent surgery and radiotherapy to remove an extremely rare and aggressive grade II haemangiopericytoma brain tumour.
It was early in 2014 when I started to have migraines and the doctor prescribed painkillers. Every night at around 8pm I started to get double vision. At first I put it down to tiredness as I was busy at work as Store Manager at Tesco Express in Bamford near Rochdale. The problem continued and I went back to the doctor who referred me to the eye clinic. I went there in February and was given some exercises to do for a lazy eye. The double vision started to happen at work as well. I had previously undergone laser eye surgery which gave me perfect vision so I couldn’t understand how I could have a lazy eye and not know about it. I was adamant things weren’t right and it got to the point where I felt uncomfortable driving.

At the beginning of March I went to A&E. I felt very anxious and was given some simple tests to do and referred to the eye clinic once again. Within a week I felt like I was going to drop, I couldn’t drive or get to work so I went back to A&E and demanded a scan. It was a Friday and I was told no scans took place over the weekend so I returned to The Royal Oldham Hospital on Monday 18th March. I had a CT scan and was told immediately and without further explanation, they were taking me for an MRI. After that, I was told there was something behind my left eye and that I would be transferred to Salford Hospital the following day. I thought that’s fine, hopefully I’ll get it fixed.

Later, I was on the ward when I got up to use the loo and I noticed someone looking at some images of a brain on a computer screen. I asked him if it was my brain and if I could take a photo of it on my phone. He said he was a student and had been told to take a look at the images which showed a severe brain tumour. It was the first time I had heard the words brain tumour and I was pretty upset. Still no-one came to see me or explained the situation.

I was taken to Salford in an ambulance where, within an hour, I saw a neurologist who told me how things stood. He said he operated on two brain tumours a week with the procedure lasting around two hours for a tumour up to 2cm in size. However, he said my tumour was 7cm and in a very awkward place. He expected the surgery to last 10 to 12 hours and he would need some help. It would be two weeks until he could get the person he wanted to work with him. He was very honest with me, which I appreciated, and said he didn’t know what to expect and that, after the tumour was removed, it would take ten days for the results to come through informing him what type of tumour it was.

During that time I was visited by Macmillan Cancer Support who gave me an information leaflet. I understood that tumours could be low-grade or high-grade on a scale of 1 to 4. To be honest I felt good, it wasn’t all doom and gloom and I could understand where I was at.

The operation was scheduled for 31st March and I knew, as well as the usual risks of any surgery, I might be paralysed or lose my eyesight. For me, those two weeks were life- changing. I wrote my will and had time to really think about things. There was a young man, a really fit guy who was always doing sit-ups and press-ups on the ward, in a bed near me. We talked a lot. He was a student and had travelled the world. He was having radiotherapy for a brain tumour and had been told his life expectancy was two to four years. That really opened my eyes to things.

Although I was very positive, I couldn’t talk to Claire as I waited for the operation. I kept myself to myself and knew I had a lot to live for, including our two children, and felt I could fight anything in the world to be with them.

I was able to spend the weekend before the operation at home and that was hugely important to me. I had quality time with the kids and slept in my own bed! There was no crying although, as Claire and I left the house to go to the hospital the morning of the operation, I felt as if I was saying goodbye to everyone and everything. Claire was very strong and I was not too emotional until I kissed my son Toby. It felt as if I was saying goodbye for the last time.

Claire stayed with me until the operation took place at 2pm. We walked around the hospital and were very positive. We hugged as we said goodbye and it was magical. She took some photos of me and was understandably upset as the time came for me to go into surgery.

The operation lasted around 10 hours but went very well. I came round at about 1am, hooked up to all sorts of equipment and with my head bandaged. I could see four or five doctors around me and they asked me some questions. Claire came through and was chuffed to see me. Then my twin sister Jenni came in and I played a joke, saying I didn’t know who she was and that I didn’t have a sister. As you can imagine, she was pretty angry to start with until she realised I was just kidding and could see I was OK.

Initially, I was not allowed to move but I was desperate to get up, have a shower and was missing my kids badly. At the time, Poppy was 11 and Toby was six. Claire didn’t want them to see me looking as I did with a scar running from my left ear across my head and a lot of swelling.

I was pleased to eventually get the biopsy results although they showed the tumour was a grade II haemangiopericytoma with only 200 previous known cases. Other than knowing the tumour was rare and aggressive, the fact that it was so rare meant the doctors did not know what the future might hold for me. The tumour was low grade and 95% was removed. I was going to have six weeks of radiotherapy but, because I had a lot of swelling, this had to be delayed.

In a way it was very fortunate because in that time Claire and I were able to travel to Crete with our children, friends and family, to get married. We had a great time. I started radiotherapy in August and finished mid-September.

I went back for a scan on 10th December and the results came through seven days later. It was fantastic news and I was given the all-clear although there was a reminder that we would not know if the tumour might come back next year, in five, 10 or 15 years’ time.

As Claire drove us back home after getting the scan results I was an emotional wreck. We had a fantastic Christmas. Tesco have been brilliant and in January, I started a staggered return to work. My job is being held open until I am able to drive again which I hope will be in September 2015.

On 10th May, my 34th birthday, I ran the Manchester 10K and raised more than £2,500 for Brain Tumour Research. I completed the event in one hour six minutes which was better than I expected. 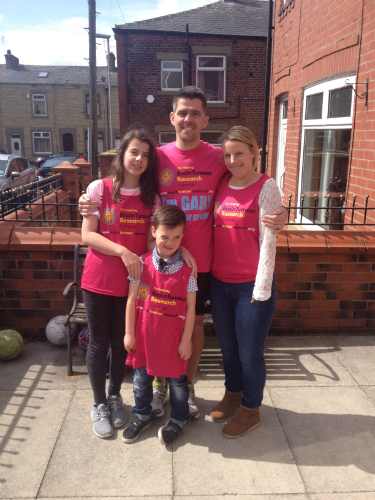