In August 2016, Wenna and Franco Pietrantonio were getting over a turbulent year. After the premature birth of their twin girls, who were in and out of hospital for their first year with various health complications, they faced another battle. In October, Franco was diagnosed with a large, presumed low-grade glioma after suffering a seizure in August. The father-of-three endured brain surgery to remove his tumour just a few days before Christmas which, thankfully, has since shown no re-growth. Now he requires yearly MRI scans and he and Wenna live with a new sense of vulnerability, knowing full well that life can turn upside down in an instant.

“Over the phone, the consultant said that Franco had a large tumour, presumed to be a low-grade glioma. To us, this was of little significance; we didn’t understand the diagnosis but instantly thought it would kill him. The diagnosis was a complete bombshell and it was awful. We tried to be strong and put on a brave face but personally, I felt very alone. Suddenly, I was on my own, looking after my family, and it was up to me to keep it together.”

Here is Franco’s story, as told by his wife, Wenna…

I first met Franco over a decade ago in Nottingham. He was quiet, but not afraid to be his own person. He wasn’t a lad’s lad and wasn’t into sports or drinking but, like me, had a fun side to him, and wanted to enjoy himself and to see the world. I was drawn to his sense of humour and how easy-going and honest he was. We hit it off immediately.

We were both in our thirties and felt like we were ready to settle down. Our relationship moved forward very naturally and, having spent six months together, we moved in together in Nottingham, where Franco had grown up. We married in 2010 and our first child, Dominic, was born in 2012. We later went on to have twin girls, Jasmine and Florence, in 2015.

Sadly, when our twins were born, life got a little more difficult. They were born prematurely and as a result, were in and out of the Queens Medical Centre for over a year with serious health complications. It was a really tough year for us all; either myself or Franco would be in the hospital with whichever child was ill, while the other would be at home looking after those who weren’t! Fortunately, in May 2016, the girls began to respond to treatment and we were able to start to live as a normal family.

We had just about recovered from the trauma when, in August 2016, our world came crashing down once more. I found Franco collapsed and unconscious in the bedroom; I thought he’d had a heart attack. He was taken to the Queens Medical Centre in Nottingham, where doctors thought it was likely he had in fact had a seizure before I had found him, most likely caused by a neurological problem. Franco hadn’t even had a blood test before and was very healthy, so we still didn’t really think there could be anything seriously wrong.

Franco was told he couldn’t drive for six months and an MRI scan was arranged for him in October. He went back to work, we had a family holiday to Turkey, and we continued life as normal. We almost forgot there could be anything to worry about.

However, on 31st October 2016, our optimism ended. We were having our family tea when Franco received a phone call from the hospital. I heard Franco say to the consultant that all he could hear were the words ‘brain tumour’. Franco was told had a large lesion in his brain, most likely to be low-grade glioma. To us, this was of little significance; we didn’t understand the diagnosis but instantly thought it would kill him. To make matters worse, that same night, Franco had another seizure. This time, I saw it happening. It was so violent, made worse by the fact that he fell as the seizure started and badly hurt his face and his head. He was taken back to hospital, where he spent the night, and was immediately put on anti-epilepsy medication.

The diagnosis was a complete bombshell. I felt as if I was in a fog. Franco was obviously devastated, as well as badly injured from the fall, and at risk of having another seizure at any moment, until the medication started to work. Whenever Franco and I had dealt with problems, such as our daughters’ illness, we had each other’s support. Now it was up to me to look after my family; Franco couldn’t be left alone himself and in essence, became another child that I alone was responsible for, whilst still reeling from the news myself. People tried to be positive and expected that I should be too, but in doing so, this inadvertently denied me the right to express my fears; consequently, although I didn’t recognise it until later, I didn’t get the support I desperately needed.

We tried to keep things as normal as possible for the children. Franco was told to rest and to avoid getting up in the middle of the night, so looking after two infants and a toddler proved tricky. Franco was also advised to keep his stress levels to a minimum, which was impossible after being given the news that he had a brain tumour.

Franco had surgery at the Queens Medical Centre on 20th December 2016, where the surgeons removed what they thought was the whole of the tumour. Remarkably, he was allowed home just two days later, so we were able to have a family Christmas together. It was brilliant to have him home but he needed a lot of rest and quiet; it wasn’t the Christmas we had once imagined. Still, it was great that he was able to have surgery and a relief to know that the tumour had been removed. Further tests revealed that it was a grade two glioma and in January 2017 Franco was also offered radiotherapy. He decided not to go ahead as the side-effects would have been very tough and long-lasting.

For the first few weeks after his diagnosis, it was hard to see the wood for the trees. But over time, we have come to realise that this is actually quite a positive brain tumour story, and Franco is actually very lucky. A scan in March 2017 confirmed that all of the tumour had been removed and we were able to get a bit of normality back into our lives. In December 2017, another scan showed that there was no re-growth of the tumour and now Franco will have yearly scans every December.

I’ve had a lot of anxiety as a result of Franco’s diagnosis, which I’m slowly learning to manage. Until he got his driving licence back in December 2017, he took public transport to work, and I panicked about him having a seizure when traveling or crossing the road. I still worry if he is late home, or if he doesn’t answer his phone.

Neither of us will ever live life in the same way again. It’s put everything into perspective and we have a new sense of vulnerability. We try to live in the moment, as we’ve been reminded that no-one is guaranteed good health, nor to live into old age. Despite this, Franco’s prognosis is good, so there is no reason why he can’t live a long life, and I look forward to a happy future together. 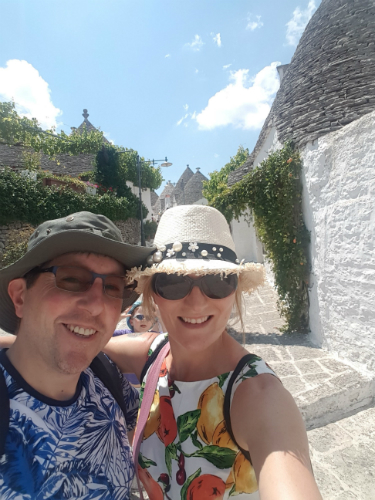