Six-year-old Evie-Mai Smith was being investigated for possible dyspraxia as a result of constant bumps and falls when her brain tumour was discovered in March 2021. The youngster, from Lowestoft, Suffolk, was eventually diagnosed with a low-grade cystic pineal tumour and underwent brain surgery on 28 September, during which 95% of it was removed. She is now being monitored with regular scans but hospital visits aren’t easy as her experience has left her with such severe anxiety that she now has to be sedated before an MRI.

Here is Evie-Mai’s story, as told by her mum Chloe …

My daughter is such a little fighter. Looking at her now, you’d never know she’d had brain surgery. As a baby she went into respiratory distress twice and got jaundice but she fights through everything that gets thrown at her and bounces back each time. I don’t know where she gets her strength from but she never ceases to amaze me. I couldn’t be prouder of her.

“She’d always been a bit clumsy but before the first COVID-19 lockdown last year it had got to the point where she was having falls and bumps every day at school, more than your average child.”

I’m so glad that I flagged it with the doctor when I did because, if I hadn’t, who knows where we’d be now? In March 2021, after being referred to the James Paget University Hospital in Norfolk, she had an MRI as part of her ongoing investigation for possible dyspraxia, which is when they discovered a mass on her brain.

“Finding out she had that was a massive shock, my mind ran away with all the ‘what ifs?’ and it felt like my heart had been ripped out.”

As COVID-19 protocols were in place, and because Evie-Mai has asthma so is considered higher risk, a lot of the information usually given face-to-face was instead given in written correspondence. It was incredibly frustrating trying to understand all the medical terminology, especially when I was the one having to explain it to my little girl. Shockingly, I read about the mass on her brain in one letter and another informed me that she was under the care of the neurology and oncology departments, which I was not expecting.

“No one had mentioned cancer to me, they’d only told me she had a mass, so that sent alarm bells ringing.”

Whilst I was still trying to digest all the information I’d been given, Evie-Mai was transferred to the care of Addenbrooke’s Hospital in Cambridgeshire, which specialises in neurosciences and paediatrics. We got a call telling us to pack a bag because they were sending emergency transportation so that they could take a closer look and see what was going on. It all seemed quite sudden which was pretty scary and my partner, Gary, suffers from anxiety so I was also concerned about supporting him. 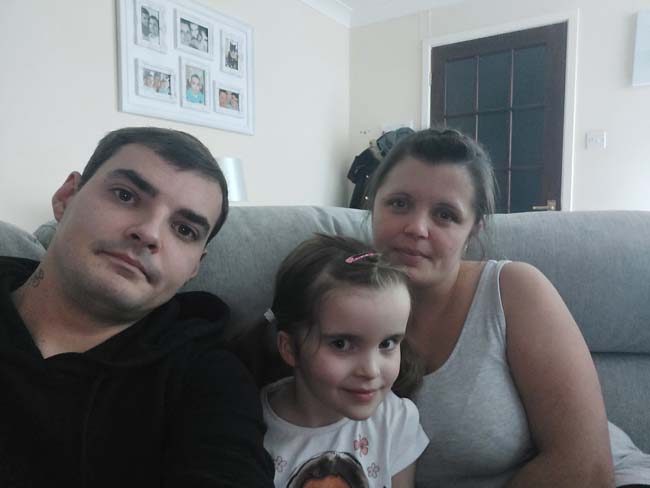 They did a contrast MRI which showed the same mass in the middle of her brain, near the pineal gland, something very small behind it and a build-up of fluid known as hydrocephalus. Initially, we were told it was too risky to operate and, because she wasn’t complaining of headaches, nausea or problems with her vision, it was just the unsteadiness on her feet, they said they’d take the wait and see approach. I didn’t feel comfortable with that as I knew she had something in her brain that shouldn’t be there but what choice did I have?

Within a month they had changed their minds and were proposing to operate on the basis of giving her a better quality of life. By then I’d had to take her out of school because she was having too many falls, which was difficult for her to understand as she wanted to be with her friends. She’d ask if they were going to school and I’d tell her that they were, to which she’d reply ‘well, why can’t I go?’ It was heart-breaking.

We did have to limit what we told her. We didn’t lie to her but she’s a very clever, switched-on kid and she doesn’t miss a beat, so we tried to protect her because, like me, she worries about anything and everything. Sadly, because of everything she’s gone through, she has developed a phobia of hospitals – her anxiety is honestly through the roof. Unlike at James Paget, where they gave her Alvin and the Chipmunks to listen to during her MRI, which she loves and is familiar with, that wasn’t the case at Addenbrooke’s so she completely froze and refused to go through with it.

“Now every time she needs an MRI, they have to anaesthetise her because she gets too distressed.” 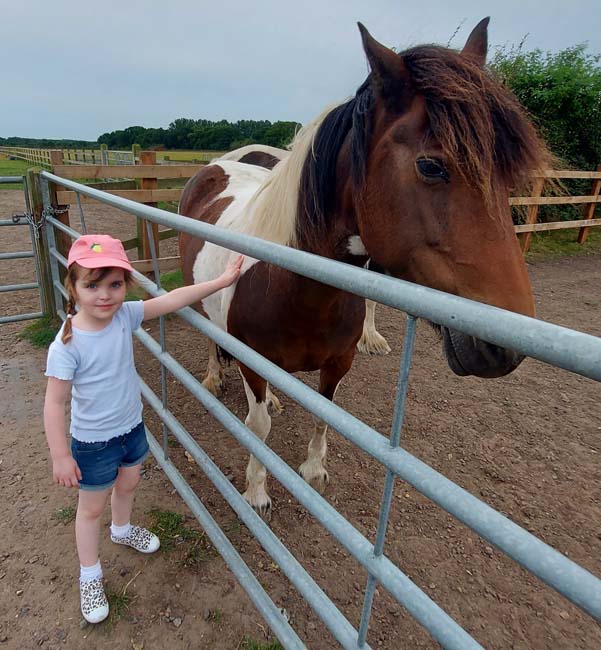 They gave me a month or so to decide whether or not we should go ahead with the operation, not that I felt I had much of a choice. Unfortunately, then came the list of risks, which really makes you question if you’re doing the right thing. My head was all over the place trying to weigh up all the pros and cons. I knew that if anything went wrong it would be on me because I’m the one who had to sign the consent form. I felt rushed into doing it too; it’s not the easiest thing to sign, knowing there’s no going back after and I desperately needed support because I was finding it really hard to deal with.

“The potential for what could go wrong goes way beyond what’s possible to comprehend as a parent.”

My six-year-old girl was taken into hospital to have brain surgery early on the morning of 28 September 2021. Gary and I were pacing the grounds all day as we were so nervous, we couldn’t keep still. She was probably in there about eight hours before being moved to the paediatric intensive care unit (PICU) and as soon as I got the call to say she was out, I was off like a bolt of lightning. I had no idea what to expect, though, we could have been walking into anything; I didn’t know what I was going to see. They had said they were going to keep her asleep for a few days but instead they woke her up straight away.

She literally slept no more than 11 minutes in the first 48 hours and looked horrendous, I don’t know how she managed it. I got a call from a nurse on the PICU saying my poor little girl had been awake all night refusing to take any medication, even though she was clearly in pain. She stayed awake all the next day too, it was awful. We had to bribe her with a Lego present by letting her build a bit and then saying ‘no more until after you’ve slept’.

“She looked almost half dead and wasn’t wanting to eat or drink much either so it was all a bit worrying.” 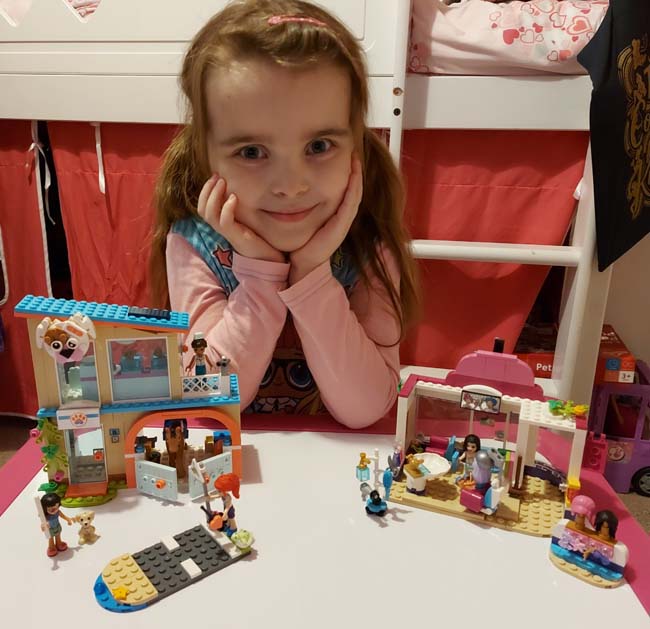 I couldn’t believe that after such a big operation she was only on the PICU for one night. Luckily, the hospital allowed Gary to stay an extra night after she was moved to the general ward because we’re not local, Addenbrooke’s is a three-hour drive from where we live and we weren’t expecting to have to make that journey so soon. It was three nights later that Evie-Mai was discharged.

The next drama was the dressing on her head, which had to come off after seven days. We were told if we damped it down it would come off but I couldn’t for the life of me remove it. They’d only shaved a small strip of her head, which made it more difficult because her hair was so matted. In the end I had to phone Addenbrooke’s for advice and they told me to take her to James Paget. We waited there for four hours and she was so distressed that they wanted to give her gas and air or some type of sedation but she refused and eventually we got it off.

They managed to remove 95% of Evie-Mai’s low-grade cystic pineal tumour, which was amazing considering where it was positioned, and within a few days we knew it wasn’t cancerous, so now we’re just hoping that it’ll stay dormant. We’ve got to wait for her scan in December to see if anything’s changed but, to look at her now, you wouldn’t know she had brain surgery less than eight weeks ago. Her memory’s not so great, which we’ve raised with Addenbrooke’s, but equally you can’t expect such a young person to go through something so big and not show any signs of it. 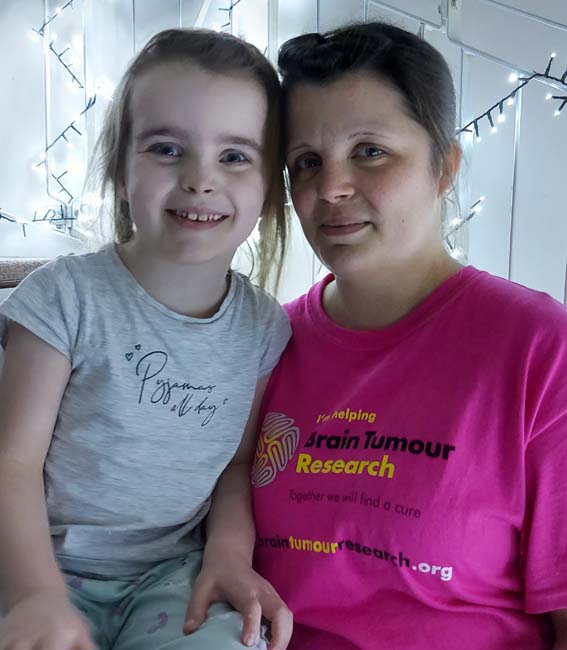 We just want to get her scan out the way so that we can focus on Christmas and getting some sense of normality back. She’s hankering to get back to school and we don’t want her to fall behind with her education, although I think a lot of kids are after the last year or so of COVID. Hopefully the new year will bring a new start – 2021 isn’t going to be missed by us, that’s for sure.

“It’s been challenging and now I feel such a relief that it’s done and out of the way, and hopefully she won’t have been too badly affected by it.”

One thing that surprised me most during all of this is how little support there is available to people in our position. My doctor didn’t know what to do or say and just pointed me towards the internet and so many organisations aren’t interested in helping unless you have a clear diagnosis or you know that it’s cancer. I was literally beside myself and none of it made any sense to me.

“It was all traumatic enough without feeling like there was no support, which is why I can’t thank Brain Tumour Research and brainstrust enough.” 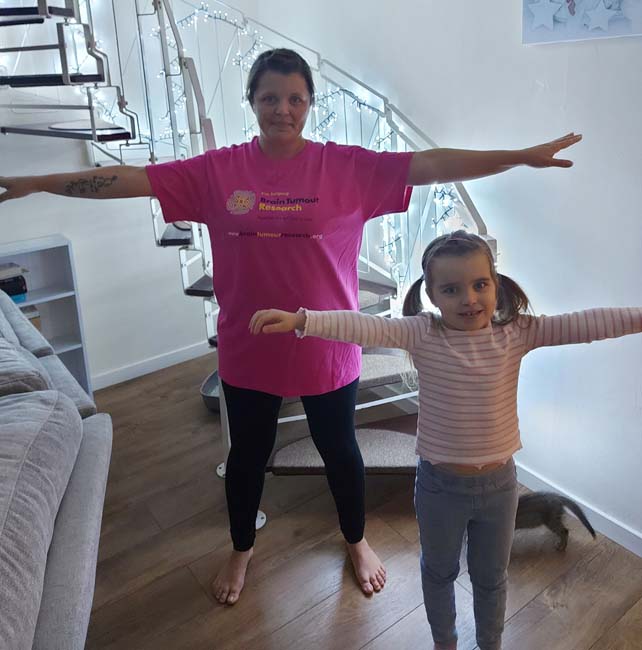 Both charities have been amazing, just being able to talk about it helps a lot. That’s why I decided to take part in the 100 Star Jumps a Day in November challenge because you can take life for granted but, when you go from having no support to having what we got, you don’t forget and I wouldn’t want to think of another family going through what we have. I’ve been overwhelmed with the response I’ve got and will definitely be looking to take part in more fundraisers in the future. 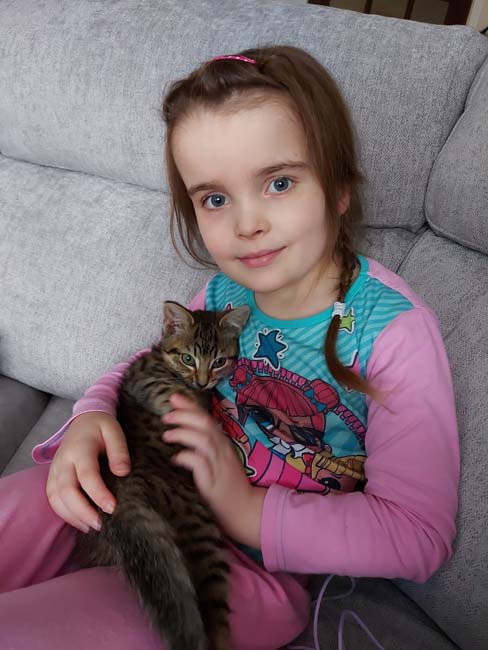