Journalist, Ellen Beardmore, was floored when she found out she had a large tumour growing in her brain. Aged 25, she had a long life ahead of her… or did she? A 13-hour operation followed and fortunately it was a success. Despite losing her hearing in one ear, she left the hospital with a newfound appreciation for life and she hasn’t looked back since.

“A CAT scan followed and it was then that I heard the words that no one wants to hear. They’d found a big tumour in my brain. They said it had probably been growing since I was a teenager, in the background and had gone unnoticed. I desperately tried to think back and remember symptoms I might have missed or ignored; could that whooshing sound in my ear have been a warning sign?”

I fell to my knees and cried when I found out I had a brain tumour. I’d been in hospital for further tests after my optician spotted something unusual but I hadn’t suspected anything serious would be wrong. I thought it would be something daft and that I’d be in and out within an hour or so.

I was 25 at the time, living in Sheffield and working as a reporter for the Sheffield Star. I’d been to the opticians one Saturday for a routine check-up and, as usual, I was in a rush and wanted the eye test over and done with. The opticians noticed that my optic nerve was swollen and said it could be quite serious and a sign of multiple sclerosis (MS). This certainly stopped me in my tracks and made me pay attention. MS? Surely not.

Two days later at the Royal Hallamshire Hospital, more tests were carried out on my eyes but there was still no explanation. My housemate, James, was with me for moral support but in all honesty, I was more concerned about getting out of there and getting back to work. It was only when I was moved to the neurology department that I started to worry, and I called my mum to come down from Dewsbury to be with me.

A CAT scan followed and it was then that I heard the words that no one wants to hear. They’d found a big tumour in my brain. They said it had probably been growing unnoticed since I was a teenager. I desperately tried to think back and remember symptoms I might have missed or ignored; could that whooshing sound in my ear have been a warning sign?

My consultant, Thomas Carroll, thought the tumour looked like a low-grade meningioma, one of the most common and treatable tumour types. I hoped this would be the case and tried to stay positive until my MRI scan the next morning.

You would think that such a significant time in your life would stick with you forever but, looking back, it is such a blur. I’m just relieved that, six years on, life is good and my tumour is a distant memory.

A week after the MRI scan, I was wheeled down to theatre for a 13-hour operation. It was supposed to last for seven hours but it turned out the tumour was an acoustic neuroma which was more difficult to remove. The consultant described it as wet spaghetti that had entangled itself around my nerves.

In the intensive care unit that night after my operation, my diagnosis began to sink in. As I lay there, in the dark and feeling woozy from the anaesthetic, fear and anxiety took over and my body responded with a panic attack. It was a terrifying night but it was almost like a turning point because from the next day, things gradually improved and, as crazy as it sounds, my life changed for the better.

I stayed in hospital for another week and except for a general feeling of weakness, I felt well within myself. I was moved to a less dependent ward and, as I was so eager to get back to full health, I would walk laps to build my strength back up. The surgery had been as successful as could be; the majority of the tumour had been removed but the hearing in my right ear wouldn’t return. With my head in bandages from the operation, it didn’t even register till I went home that my hearing had gone.

Leaving the hospital was exhilarating – ‘I’m alive, this is amazing!’ I thought.

I was signed off work for three months but boredom got the better of me and I returned after five weeks. Thankfully, I’d been paid full sick leave and didn’t have any financial stress while I was ill. I was also lucky enough to keep my driving licence, which I know isn’t the case for a lot of patients.

Being unable to hear on one side took some adjusting to but, in the grand scheme of things, it was a small price to pay. I’ve tried different hearing aids over the years but I don’t get on very well with them. On the upside, I’m an excellent lip reader now.

I didn’t need any chemotherapy or radiotherapy after my operation but I was offered gamma knife surgery to prevent the remaining parts of the tumour from spreading. Going into the gamma knife machine was nerve-wracking but nowhere near as traumatic as being wheeled down for my first operation. I was awake the whole time and I couldn’t feel a thing. What’s more, I only needed one day off work to recover. How fortunate I was to live near a hospital that offered this revolutionary new treatment.

My newfound appreciation of life put things in perspective for me and helped shape who I am today. As my body recovered and gained strength after the operation and gamma knife treatment, my resolve and independence strengthened too. I decided to leave a dead-end relationship and I started planning a solo three-month trip around Asia.

About 10 months after the surgery and just before I set out on my travels, a guy called Liam asked me out in a bar. We’d met before but this time we clicked instantly – even staying in touch with each other while I was away. We moved in together soon after I got back and we’ve been happily married since 2016.

Health and fitness have also become a big part of my life post-tumour. In 2017, I completed a triathlon, this year I’ve completed the Sheffield Half Marathon and Yorkshire 10-mile, and one day I even hope to run in the London Marathon.

My latest scan results in September 2018 came back clear and I won’t have to worry about another scan for two years. I’ve been extremely lucky and I know, for many people, a brain tumour diagnosis causes so much more devastation. Less than 20% of brain tumour patients survive beyond five years – and I am one of them! I hope my story can inspire others. A brain tumour diagnosis is terrifying but you have to enjoy the present day and have faith that things will improve. 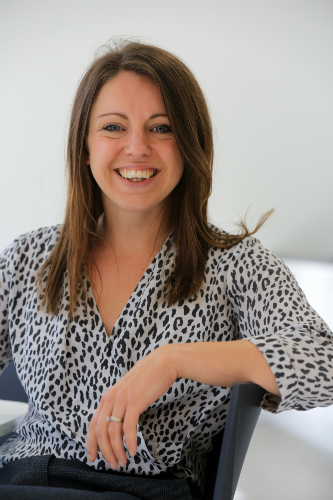