Mechanic Debs Clarke suffered years of crippling back pain prior to being diagnosed with a grade two hemangiopericytoma (HPC) brain tumour in February 2017 at the age of 43. Despite being house bound and coming to terms with maybe not returning to the job she loved, her strong faith has allowed her to remain positive and thankful for every day. Though her tumour is rare, she has been told there is a small chance her sisters could carry the genes, and is now focused on ensuring her sisters are tested for the disease.

“When a nurse looked at me funny after having my CT, I had a bad feeling about the results as she looked really worried. I called my best friend Mel panicking and said “I have a brain tumour”, to which she told me to stop being silly, as it was “likely to be nothing serious as brain tumours are really rare”. My suspicions were confirmed when the doctor called me the following Monday.”

I was 28 when I decided to change my career in childcare and follow my dreams of being a mechanic. I had studied nursery nursing at college in Essex and had spent my early 20’s working with families to help look after their children. I loved working with kids and, in my teens, always enjoyed babysitting, so it seemed a good progression. However, I knew my passions lay elsewhere and I decided to bite the bullet and relocated from Romford in Essex to Dereham in Norfolk to take a job in a garage.

I loved working with cars and enjoyed every part of the job but after 12 years of up to 70 hours a week I knew that my body was breaking under the hard labour. Attending a baptism in a church in 2013, I found myself in agony after a sudden movement. An MRI scan revealed I had degeneration on three discs in my back, leaving me in pain and unable to work. My life changed as I had further issues with my back and shoulder and the constant pain meant I could never return to the job I loved.

It was August 2016 my migraines started, but I just dealt with the pain, like I had with my back. It wasn’t until the headaches hit me harder in February 2017 that I knew something wasn’t right. Painful headaches followed swiftly by slurred speech, blurred vision and poor hearing had me worried. The doctor brushed it off as a bad migraine and prescribed me painkillers which did nothing. I insisted on having a CT scan and further blood tests, as this pain felt different to the horrible pain I had experienced in my back.

When a nurse looked at me funny after having my CT, I had a bad feeling about the results as she looked really worried. I called my best friend Mel panicking and said “I have a brain tumour”, to which she told me to stop being silly, as it was “likely to be nothing serious as brain tumours are really rare”. My suspicions were confirmed when the doctor called me the following Monday to tell me I had a benign meningioma and that I would need an MRI scan.

When I asked asking the nurse after the MRI how big it was she replied “are you booked in for surgery?” I then knew my tumour was bigger than I had thought. My doctor later confirmed that my tumour was about the size of a small orange behind my left eye, and that I would need surgery to remove it.

Although I was in a state of shock I quickly snapped out of it as, unlike my back problems which had plagued me for years, this time there was something which could be done. My family were very worried, though they tried to be strong and have only recently told me they feared I wouldn’t make it through the surgery.

I tend to have a very positive outlook on life. Maybe it’s because I’m the eldest of two sisters or that I have a strong faith which means I take everything on board. I even shaved my head raising money for Brain Tumour Research the day before my surgery, much to the amusement of Mel who said my short hair made me look like the fictional boy adventurer Tintin as I had a little tuft of hair left on top of my head.

Following a biopsy after my tumour was removed, I was found to have a grade two hemangiopericytoma (HPC), a rare type of brain tumour which can affect siblings. I wasn’t aware that something like this was possible and made me concerned about my sisters Emma and Claire.

I was also shocked to read that brain tumours kill more children and adults under the age of 40 than any other cancer, yet just 1% of the national spend on cancer research has been allocated to this devastating disease. It’s terrible to think that there is so little investment in research.

As I only had surgery in May I’m still in recovery. At some point in the future I would love to travel to America to see friends, but I’m not thinking that far ahead. At the moment, my concern is looking after myself. I still suffer with my back and shoulder pain, so going back to work as a mechanic is unlikely. If I could swap right now with someone in work I would bite their hand off to do it. I have worked since I was 12 years old with a paper round, so not being able to work has been very isolating.

My parents have been such a fantastic support over the last six months, though I know they worry that this is something that they are responsible for. My sisters are being tested at the moment, so I have my fingers crossed that they don’t carry the gene, as I would hate for them to go through what I have. I have been told I will need radiotherapy after my next round of tests in August, but I am willing to fight this disease for as long as I need to. 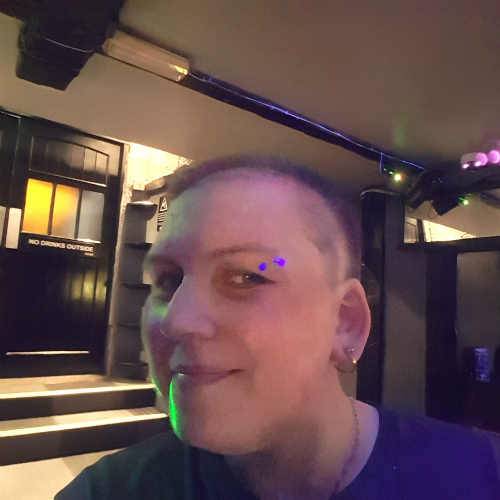