After experiencing months of painful headaches and issues with her balance, flight attendant, Danielle Louise Gould was diagnosed with a cerebellar hemangioblastoma brain tumour in 2012. Though her tumour was categorised as low-grade and not aggressive, Danielle still had to undergo 8 surgeries to remove the tumour and control the fluid build-up on her brain. With the support of her family, boyfriend and twin sister Cherise, Danielle rebuilt her life after the tumour and remains determined to continue working on her bucket list of goals with her sister before they turn 30 next year.

“I was taken to the John Radcliffe Hospital in Oxford, where an MRI scan revealed the nature of my tumour. It showed I had a tumour the size of a pea called a cerebellar hemangioblastoma in the centre of my brain, surrounded by a layer of fluid. This build-up of fluid, the size of an egg, was pushing on the cerebellum, which is the part of my brain that controls balance, movement and coordination.”

Towards the end of 2011, I had begun to struggle with terrible headaches, and tiredness. As someone with a bubbly personality and a positive outlook on life, this feeling of unwellness led to my mood and attitude becoming down and negative. I think, looking back, I knew I wasn’t myself but just accepted that people have bad weeks. However, in my case, it went on for months.

By January 2012, I had got used to the fact that headaches were now part of daily life and paracetamol became my coping method. My family, friends and boyfriend Ian insisted I went to the doctors, but even they told me it was just a virus and prescribed strong painkillers and told me I needed to relax, drink more water and get more sleep. They even said: “you need to go to the mountains and get some fresh air!”, Which I did, I went skiing! But still the pain continued and I had begun to not be able to keep food down and struggled to use my right arm.

Months passed and still the symptoms didn’t improve. I was living with my mum and dad at the time and I remember my dad looking at me strangely and asking me why I wasn’t walking straight and was tilting to the side. I looked at him puzzled and said I was fine, but when he noticed a rash on the back of my neck, he insisted on taking me to the doctors straight away, fearing that I might have meningitis. The doctor reassured us that it was nothing to worry about and sent me home with more tablets for anti-sickness and cream for the rash.

My sister and I are not only identical twins in looks, but also in our positive outlook on life and are constantly in fits of giggles at the smallest of things. So, when I began to feel worse I knew I wasn’t myself and Cherise knew it too.

When Cherise returned from university that Easter, she was very open about how bad I looked, having not seen me since Christmas, and it was evident to her that I was truly unwell. By that evening I couldn’t keep any food or drink down and my head was like a “thunderstorm,” banging away so hard that I could hardly keep my eyes open.

Mum and Cherise immediately took me to A&E, where I laid down in the waiting room with my head on Cherise’s lap, trying to ease the pain. I knew the hospital was the best place for me to be but I think in that moment I was just thankful my sister and mum were there.

I felt silly explaining my symptoms to the doctors, as I thought I was wasting their time, but when they asked me to raise and drop my arms to test my balance and movement, I was convinced my arm was up, but in fact my right arm had dropped down. Clearly something was wrong.

When Dad arrived shortly later, I was so happy to see him but remember fainting on the floor. I was then quickly admitted for further tests.

After the earlier balance test, they wanted to keep me in overnight, with the hope of being able to schedule a scan in the morning. I was on my own for the CT scan, which was daunting, but the nurses were very sweet in helping reassure me that it would be OK. The doctor came up to my bedside later that day to give me the results. Being on my own when I discovered what was wrong was not what I had envisaged.

“We have found something on your brain and we think it is a tumour” he said, followed swiftly by: “Is there someone who we can call for you?” I think I was in shock at the news as I couldn’t think of any numbers of people to call. I had earlier seen a friend of my dad’s, who worked at the hospital, and asked if he could call my family to get them to come back to the hospital. If he hadn’t been there, I don’t know how I would have let me family know the news.

My mum was great. As soon as she arrived, she spoke to the doctors remaining calm while trying to understand the situation. She is a Ward Clerk at the hospital.

I was taken straight away to the John Radcliffe Hospital in Oxford, where an MRI scan revealed the nature of my tumour. It was the size of a pea in the centre of my brain, surrounded by a layer of fluid, and was called a cerebellar hemangioblastoma. The build-up of fluid was about the size of an egg and was pushing on the cerebellum, which controls balance, movement and coordination. Though my tumour was categorised as low-grade, they explained there was a high chance I could suffer with blackouts or possible stroke if it wasn’t removed.

Emergency surgery was planned for the next week and as someone who had never been to hospital before, let alone have an operation, I was really nervous about how I would cope with the surgery. Every thought goes through your mind before you go into theatre.

When I woke from surgery I was informed they had managed to remove the tumour and had fitted a drain to get rid of the fluid.

It was a few weeks later that my letter arrived from the hospital saying I was being given the all-clear by the medical staff. I was so pleased that it was all over. However, a later visit to my surgeon revealed that I had been sent the wrong letter, and not all my tumour had been removed in the operation. I remember being really upset and just wanting to go back to feeling normal again but he tried to reassure me it would be OK.

I met a wonderful lady while I was in recovery in the John Radcliffe hospital who had terminal cancer; she was so positive and was a massive help in keeping me optimistic, I am still good friends with her and all of her family.

In June 2012 I was back in surgery to have another operation to remove the tumour, but my brain went in to overdrive and produced too much fluid, causing more headaches, so I had a lumbar puncture and they later decided that I needed a shunt fitted as the pressure and fluid was building up again. A blood clot on my brain was also discovered, resulting in another operation. Thankfully that was the eighth and last operation that I’ve had to undergo, and I feel lucky that I didn’t have to go through radiotherapy or chemotherapy.

In 2016, while working as a customer service advisor and receptionist at a car dealership, I got talking to a customer who explained that he was a pilot for British Airways and encouraged me to apply for their cabin crew training programme. I was a little hesitant as I felt that they would reject me due to my height and medical history. However, I was shocked and elated when they accepted my application on the basis that my surgeon confirmed that I was fit to fly. Four months later, I was on my first flight to Las Vegas and have loved every minute of my job over the last two years.

When I came out of hospital, six years ago, Cherise and I made a bucket list of all the things we wanted to achieve before we turned 30 in 2019. Cherise completed one of her big goals to run the London Marathon this year along with my boyfriend Ian in aid of the charity Brain Tumour Research. I was so proud of them both, I had no idea of the startling statistics around people diagnosed with a brain tumour.

I feel lucky that for the last six years my annual MRI scans have come back clear, and every time those results come in I appreciate what I have so much more, making sure that I don’t put off the things I want to achieve just because of fear. Getting married, having children and even going to Machu Picchu in Peru next year for my 30th birthday are all things I want to achieve and are on my bucket list with Cherise. The tumour was part of my past. I don’t want it to be part of my future or what defines me and how I live my life and I am determined to make new memories with those whom I love dear. 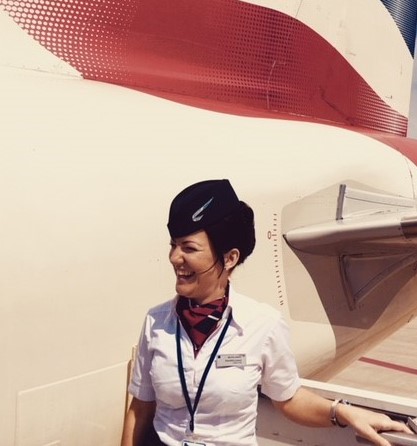