Daniel is the youngest of three children with an older brother and sister. In his last year at Dr Challoner’s Grammar School in Amersham, Daniel is studying for A’ Levels in Further Maths, Physics and Geography, having already taken Maths last year.  He is applying to university to study Mechanical Engineering and hopes to get a place at Imperial or Bath.

Aged 17, Daniel was just 5ft, 5in tall, despite his Dad being 6ft 4in.  Investigations led to him being diagnosed with a tumour on his pituitary gland, which fortunately turned out to be benign.

“Mum found the six-week wait to learn whether the tumour was benign or malignant much more worrying than me. It really affected her, especially as, unbeknown to me, she went online and looked up pituitary gland tumours and discovered that in 20 per cent of cases they are malignant. I was more worried about whether I was going to be able to continue boxing, which I had enjoyed so much for the past five years.”
I didn’t have any symptoms, apart from the fact that, aged 17, I was very small compared to my peers at school, as well as other members of my family.  My Dad is 6ft 4in tall, while I, at 17, was just 5ft 5in.  At first, we weren’t really worried by my lack of stature, as Dad was a late-developer, only reaching his full height aged 18.

Being so short and also looking very young, has led to many funny and sometimes embarrassing incidents.  Only last winter we were flying to go skiing and the air hostess handed me a colouring book for under 12s;  learning to drive I was stopped by the police to check my ID as they didn’t believe I was over 17 and even buying petrol I have been asked to prove my age.

When I was younger, I played rugby as a hooker at county level for a number of years, but it became too scary when I weighed only 8st and was up against hefty lads of 16st, so I gave up playing.  Boxing became my passion, helped by the fact that in my class there could only ever be a maximum of 2kg difference in weight between me and my opponent.

Eventually, however, we went to see our GP and I was referred to a paediatrician who recommended a whole raft of tests.  A test on my wrist showed that my bone age was two and a half years behind what it should be, so I was prescribed growth hormones via a daily injection.  For someone who had, until then, been terrified about needles, this was quite a tall order, but I learnt to take it all in my stride once I had mastered how to administer the daily injections myself via an epi-pen.

I was sent for an MRI scan of my brain and afterwards I glanced at the monitor displaying my scan.  I knew at once that there was something wrong when I saw a small spot of dense colour in the otherwise black and white image of my head.  It was at that moment that I was genuinely scared.  I knew that wasn’t normal and could indicate a tumour.  However, I was even more scared to say anything to my Mum as I knew it would affect her even worse.

It was on 28th January 2016, a day after my scan, that everything became a lot more serious.  Mum had a phone call from the consultant who told her that they had found a tumour on my pituitary gland.  Mum and Dad were left to tell me – although I had already kind of worked that out for myself.

I had to stop taking my growth hormones as the doctors were worried that they might be feeding the tumour. The scan was sent off to be examined and we waited several weeks for news.

Mum found the six-week wait to learn whether the tumour was benign or malignant much more worrying than me.  It really affected her, especially as, unbeknown to me, she went online and looked up pituitary gland tumours and discovered that in 20 per cent of cases they are malignant.  I was more worried about whether I was going to be able to continue boxing, which I had enjoyed so much for the past five years.

We managed to put our fears aside in order to spend a couple of days skiing in Andorra.  I also managed to get some time off school.

On 10th March, we were over the moon when it was confirmed that the tumour was benign.  It was also good news to hear that I didn’t need surgery – they were going to just keep a watchful eye on the tumour.  I will have another MRI in February 2017, as well as regular eye checks – and I resumed the daily growth hormone injections.

Reassuringly, I have already grown 3 inches and hopefully I will continue to grow for a while yet.

I realise I have been very lucky and that thousands of others diagnosed with brain tumours are not so fortunate, which is why I want to give something back.  I ran my first half-marathon at the age of 14 under my brother’s name because the minimum age was 15.  Now I am looking forward to running the London Marathon in 2017 for Brain Tumour Research and have been told that I will be the charity’s youngest marathon runner to date. 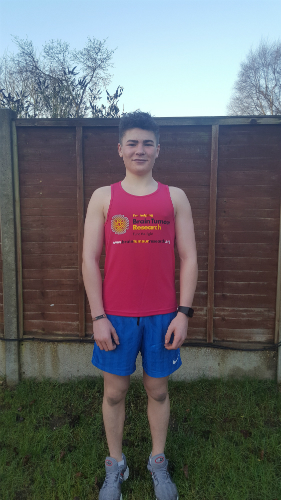