Aged 30, Dan Braiden, from Cosham, near Portsmouth, had already survived testicular cancer only to be told he had a highly aggressive and incurable brain tumour. The developer at The Insurance Factory, an insurance firm based in Portsmouth, had suffered from a number of symptoms including tingling sensations, before his diagnosis with a glioblastoma multiforme (GBM) in December 2019. Having had surgery and radiotherapy, Dan is trying to stay positive, with the support of his caring parents and loveable dog Winston.

My diagnosis with an aggressive and incurable brain tumour came just 18 months after I was diagnosed with testicular cancer. They say everything happens in threes, but I’m hoping that’s the end of my bad luck.

“It took a long time to get a brain tumour diagnosis, in December 2019, much longer than when I was diagnosed with testicular cancer. So I’m determined to raise awareness of the symptoms to look out for.”

I was 28 when I was diagnosed with testicular cancer, but it was a relatively simple to treat. From my diagnosis, after visiting the GP due to painful symptoms, it took only a week for the cancer to be removed. I had surgery followed by chemotherapy, to mop up any remaining cells, and I never suffered with it again.

My brain tumour diagnosis, however, was a very different story altogether. I feared that I’d been suffering from transient ischaemic attacks (TIAs), sort of “mini strokes”, and described these events to my doctor in Cosham. I was surprised when he put it down to migraines, even after demonstrating what had happened. Over the coming weeks, I found myself going backwards and forwards to the GP, desperate to get a second opinion.

The next symptoms started while I was at work as a developer at The Insurance Factory, an insurance firm based in Portsmouth. I experienced blinding pain in both arms while making a cup of tea, which I then spilt on the floor. I didn’t think too much of it, but my boss was adamant I needed to go back to A&E.

I’d also been experiencing tingling in my left side and feelings of déjà vu, as if I’d already dreamt of events that were happening in my life. It wasn’t until I struggled to walk, dragging my foot along the ground while leaving a hairdressers appointment, when I really started to worry.

“The déjà vu symptoms are really hard to describe, but it felt as if listening to a song, or having a conversation, would trigger memories of what was about to happen in my life. I later found out this was due to the tumour’s location, in my temporal lobe, which affected my memory.”

I felt as if no one was taking me seriously and the doctors didn’t care. Having already been to A&E once, I had to lay it in thick. I had a CT scan and the consultant reassured me that I hadn’t had a stroke. But the relief was short-lived.

“I was shown the scan which revealed a large mass in my temporal lobe. It was a grade 4 glioblastoma multiforme (GBM) – a highly aggressive type of brain tumour.” 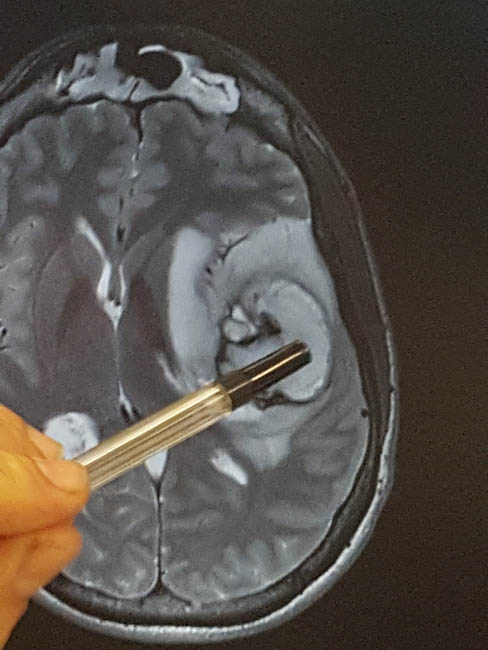 There was a huge haemorrhage around the tumour, meaning that while I had been going to work, the gym and carrying on with my life, I’d suffered two massive bleeds on my brain. That explained the symptoms, when I temporarily lost my ability to walk and had tingling sensations in my arms. I couldn’t believe it.

“The news was far worse than my testicular cancer diagnosis, because of the dire statistics of GBM tumours. The average survival time is devastatingly short – just 12-18 months.”

Just days after my diagnosis, I was booked in for surgery at Southampton General Hospital, on 16 December 2019. I couldn’t believe that I would be in and out of hospital in a day, and I wouldn’t have to be admitted for a long period of time. I had a top neurosurgeon and was awake during all of the operation, to ensure no healthy brain tissue was being damaged during the procedure. I labelled objects presented to me on cards, while hearing the drill inside my head. I was a surreal experience. 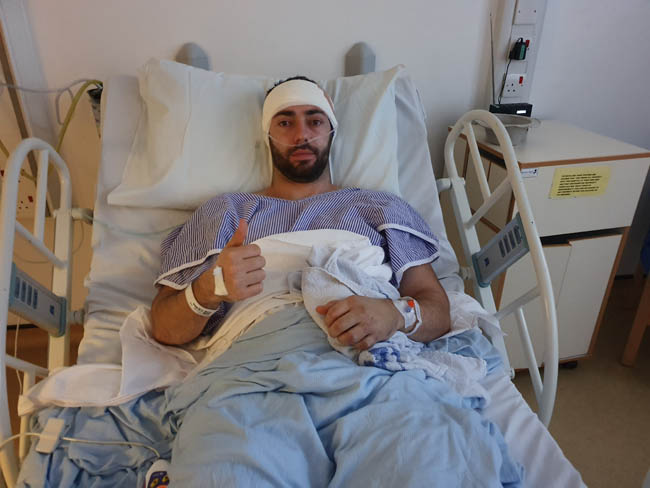 The next day, it felt as if someone had whacked me round the head with a heavy object, but I was so pleased to be back home. The surgeon cut through my jaw muscle during the operation and I still can’t open my mouth very wide because of the tearing. 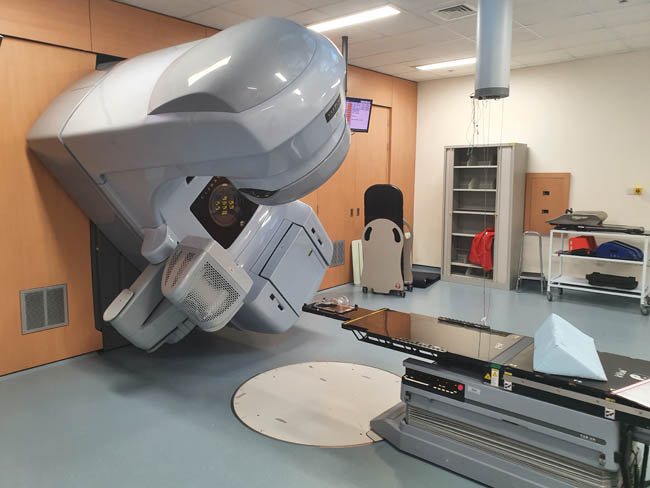 Once I had recovered from surgery, I had six weeks of radiotherapy which was tolerable, but I hated being in the hospital waiting room surrounded by much older patients. The treatment caused me to lose my hair, but I’m told that I suit the bald look, so that’s a positive! 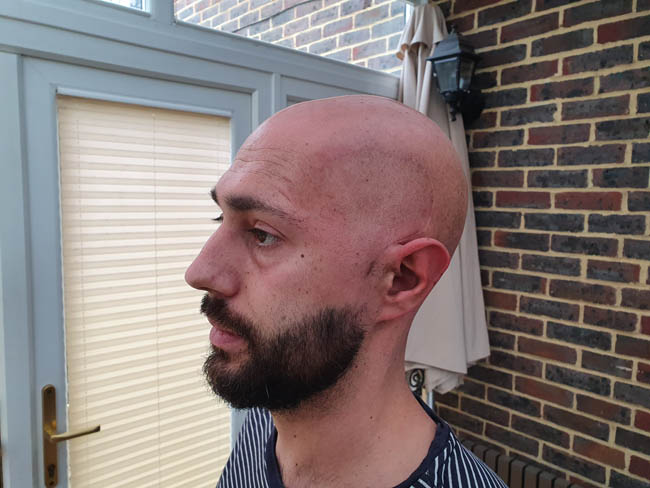 My parents, who live in nearby Havant, have been very supportive and are helping me through the difficult times. My dog Winston, an American Bulldog, is fantastic company and the best companion on the worst days. I bought my first house, in Cosham, near Portsmouth, in February 2019, but have decided to stay with my mum and dad for the time being, until I feel much better.

In between my craniotomy and starting radiotherapy, Dad and I had a trip to Poland where we visited the salt mines – a brilliant place to go, as well as Auschwitz – horrific but a must-see if only to ensure it never happens again. I was very lucky that Mum volunteered to stay home to look after Winston. 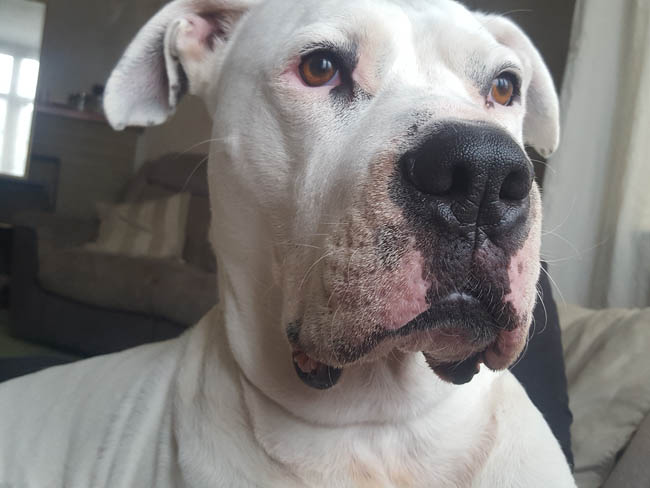 Ten weeks after my diagnosis, I celebrated my 30th birthday, spending the morning having radiotherapy! The following weekend, however, along with a bunch of mates, I went to Amsterdam and nearly got stranded there by a massive storm. Knowing I had missed one radiotherapy session already, I ended up paying an extra £180 to get the last flight back to the UK before all planes were grounded.

I started on temozolomide chemotherapy soon after the beginning of the coronavirus pandemic and was worried the treatment, which caused me to be immunosuppressed, would make me even more vulnerable to the virus, but fortunately, to date, I have managed to avoid COVID-19.

In June 2020, Dad and I took another long weekend trip, this time to Iceland. It’s a holiday destination I would highly recommend for its incredible geysers and waterfalls, as well as a black sand beach (it’s really pitch black) and Diamond Beach – so called because the bits of ice there look like massive diamonds 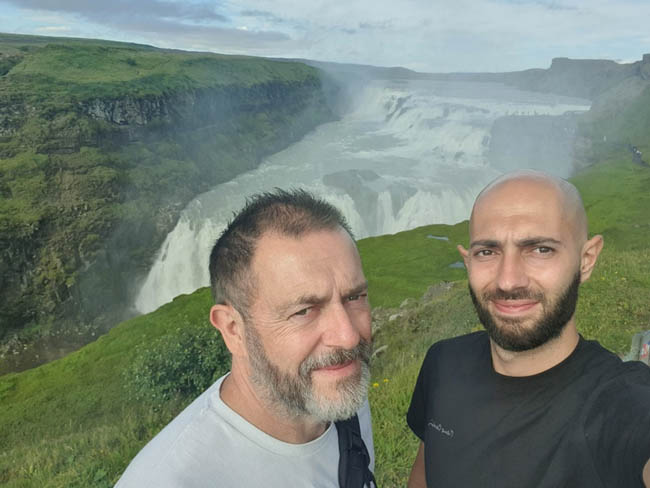 I was having scans every three months which all showed that the tumour remained stable, until a scan in March 2021, which showed regrowth. I was immediately put back on chemotherapy – this time lomustine and procarbazine. I am so grateful to my clinical nurse specialist who has been incredibly supportive and made the whole experience so much more bearable.

“It was a horrible blow to hear the tumour had come back, particularly as it came after what was supposed to be the last of my three-monthly scans before I was due to go onto six-monthly MRIs. It was also a complete shock to me because I hadn’t experienced any symptoms.”

It makes me feel very emotional that my parents will have to organise a funeral for their only child. No parent should have to do that.

Having an incurable brain tumour impacts on everyone who loves you. We’ve all got an expiration date, but it’s nice if that comes in old age.

To look at me now, you would have no idea that I am ill but, as the brain tumour takes over, that will change.

I want to make people aware that they shouldn’t just roll over and take their doctor’s opinion, but to seek a second opinion. I spent six months going to the GP with what turned out to be focal seizures.

Before I had been given the results of my March MRI scan, I had already started planning to take on a double ascent and descent within 24 hours of Snowdon with my dad to celebrate turning 30. This went ahead on 21 May 2021 in awful weather conditions. We had to delay our second climb because of driving wind and pouring rain, but we did it and raised more than £2,500. 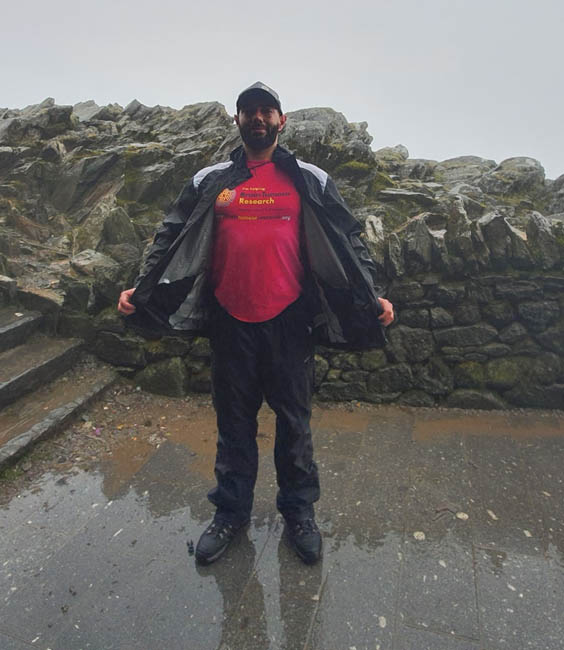 I am delighted to be helping to raise funds for vital research. I know it won’t help me, but it’s good to think that scientists are working now to find more effective treatments and ultimately a cure for brain tumours, bringing hope to future patients and their families.

“I’m taking each day as it comes and am trying to stay positive, but it’s becoming increasingly difficult at this very uncertain time.” 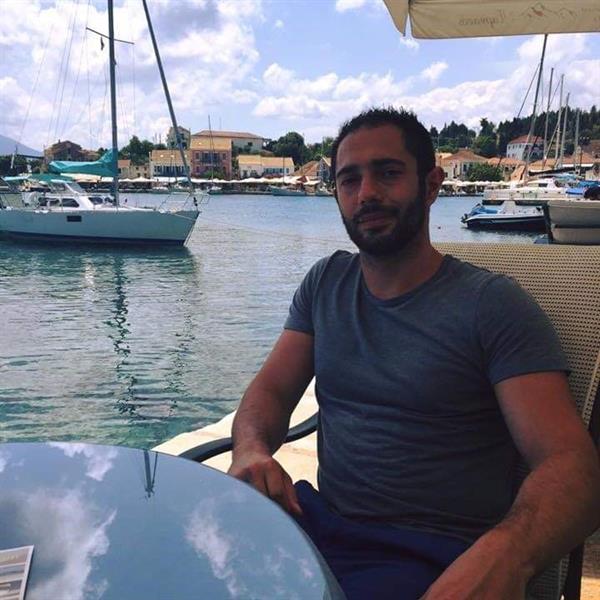