Former Royal Air Force (RAF) serviceman Cliff Comber, 63, enjoyed a 27-year career in the military before he left the forces as a Chief Technician (Chf Tech) in January 2003 and took up a civilian position with South Yorkshire Police. The grandfather, from Thurcroft near Rotherham, maintained his fitness after leaving the RAF, running eight miles a day to and from work and regularly taking part in numerous marathons, half marathons and running events. His world came crashing down, however, in November 2021, when he was diagnosed with an aggressive brain tumour. Cliff, an avid Crystal Palace FC fan, is currently on chemotherapy treatment and is coping well, while his family, including his wife Carol, tries to come to terms with the devastating diagnosis.

My dad had a fantastic career in the forces. He worked as a radar technician and I have fond memories of all the different postings we had, both in the UK and abroad. We lived in Cyprus, where Dad was stationed in the Troodos Mountains, and also did a stint in Germany. He completed a tour of the Falklands and is very proud of the time he served as an Airman. 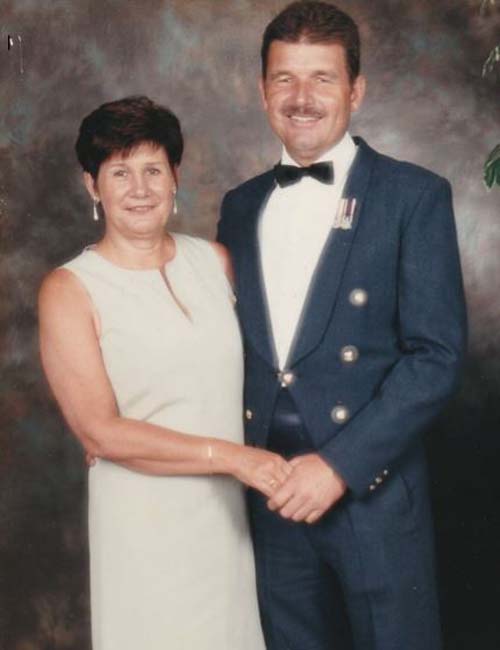 After Dad’s retirement from the military, he and Mum settled in Thurcroft, near Rotherham, which is not far from where my husband Craig, our 10-year-old daughter Franchesca and I live in Ravenfield. Not one to slow down, Dad has managed to maintain his fitness as a ‘civvy’, by running almost every day and by taking part in several marathons. 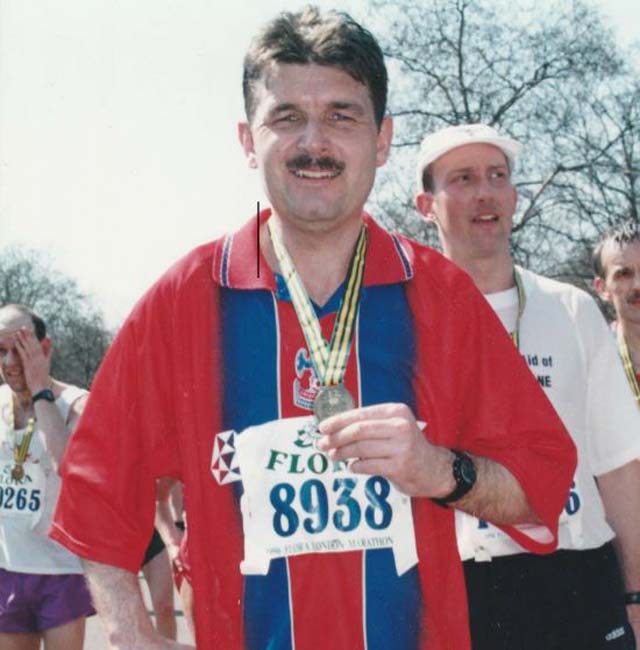 “He’s even got his name down to do the Hull Half Marathon in June, but as he'll still be on chemo, we’re not sure if he’ll be able to manage it.”

Dad’s brain tumour journey began on 6 October 2021. He’d run to work one morning, as usual, but when he got there, he didn’t feel right. When he went to put the passcode in the secure keypad at the entrance, he couldn’t remember the number. His colleagues were concerned but couldn’t work out was wrong with him. When Dad then collapsed, they took him straight to Rotherham Hospital, thinking that he may have suffered a stroke. He was sent from Rotherham to the Royal Hallamshire Hospital in Sheffield. Doctors there allowed him to go home that night, but asked him to come back for an MRI scan the next day. At home, Mum was really worried about him. His short-term memory had gone and he was crying a lot. She thought he might have been having a mental breakdown. The following day, he had the MRI and afterwards, he was discharged having been told he had migraine with aura.

After he got home, the hospital phoned and said they’d had a look at the MRI scan images and thought he might have a brain infection. He was admitted to have intravenous (IV) antibiotics administered, which he seemed to respond well to. However, the results of a lumbar puncture showed there was no brain infection, so they decided to do another MRI scan, this time with contrast. Afterwards, the doctors said it looked like he had a low-grade glioma in his left temporal lobe. Although the idea that he had a brain tumour was scary, the fact that the doctors didn’t seem too concerned put us at ease. They said it was operable and after a week or so, he was discharged in time to attend his brother Paul’s wedding in Castle Combe, where he was best man.

Dad was booked in for another MRI scan a few weeks later, this time of his brain and thorax. They wanted to make sure there were no other growths relating to his glioma. His results came a few weeks later. I remember it was around Bonfire night, as I was about to go to Whitby in North Yorkshire for the weekend with Craig and Franchesca. As we were driving there, Dad phoned me and he was absolutely delighted because he’d just had a call from his consultant, who told him that everything looked good on his scan results. He was relieved and so were we. We arrived in Whitby, feeling so glad that everything was going to be OK, but that feeling was to be short-lived. The next day, my mum phoned me and she was hysterical. A surgeon had called with some updated results.

“They said it didn’t look good and that Dad would need to go straight into hospital for treatment.” 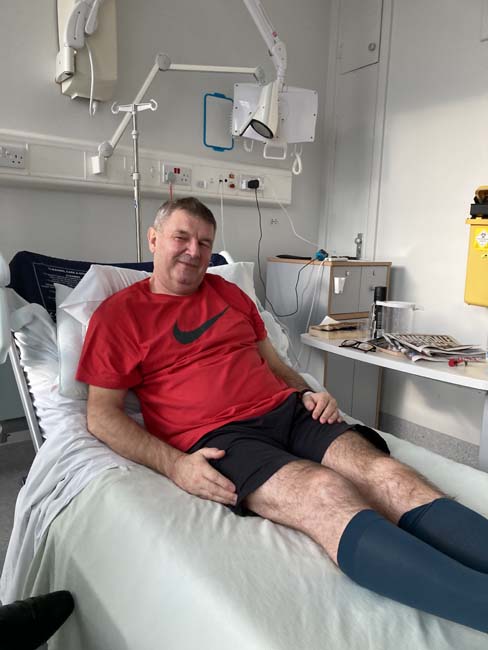 It was a scary time but when Dad and Mum met Dad’s surgeon, Mr Shungu Ushewokunze, at the Royal Hallamshire, they were put at ease. He was so amazing. He sat them down and said the tumour had grown from a ‘dot’ to a mass the size of a tangerine. He described how it had ‘tentacles’, which would make it difficult to remove the entire tumour. Dad signed the consent forms and agreed to go ahead with a debulking craniotomy on Tuesday 9 November. He got through the five-hour operation really well. Mr Ushewokunze phoned my mum afterwards and said Dad had been able to give him her mobile number, which sounded very positive. We went to see him on the high dependency unit (HDU). He had an impressive question mark-shaped scar, with 52 staples. Mr Ushewokunze said he was confident they’d got it all. He described Dad as his ‘star patient’ and allowed him to come home after just a few days, with a prescription of steroids and anti-seizure medication. 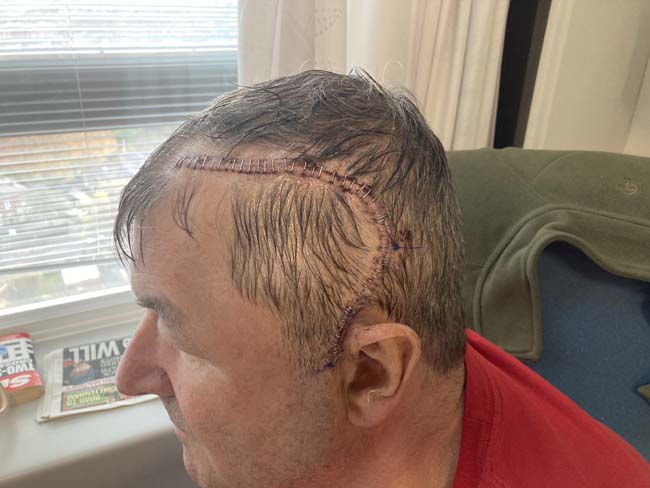 A few weeks later, we went back into hospital for the biopsy results. Although Dad was healing really well from his surgery, there was some bad news. We were told that, unfortunately, his tumour was a grade 4 glioblastoma (GBM).

“We quickly realised that this was one of the most aggressive types of brain tumour and that it was very likely to come back.” 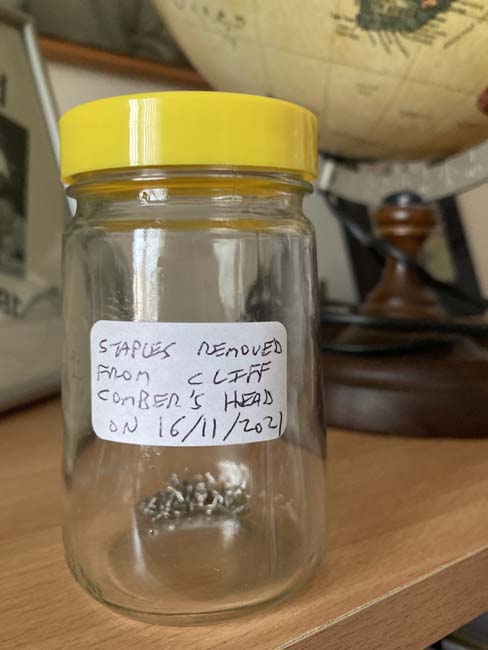 A week or so later, Dad had an appointment with his oncologist at Weston Park Cancer Centre in Sheffield. I went with him and Mum but I had to wait outside because of the COVID restrictions. During the appointment, Dad was given his treatment plan, which was good for him, as he was always keen to have an itinerary. The cancer treatment began with a six-week course of daily radiotherapy and concurrent chemotherapy, which started on 20 December and finished on 2 February. He was amazing throughout. 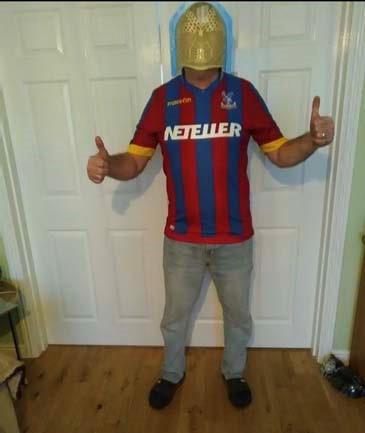 Dad then started a course of more intensive chemotherapy 8 March. Again, he has been so strong during the treatment, even completing a two-mile and a five-mile run after starting on it. He takes anti-sickness tablets but luckily, he’s not really suffered with nausea.  He is due to be scanned at the end of May and will continue to be scanned every three months. We live in hope that each scan will produce positive results, showing no regrowth, although we know there is a strong likelihood that it will return at some point. Dad is aware of his prognosis and struggles with the idea that there is no cure, but we all try to have hope and always remain positive.

Dad has been blessed with fantastic support from our local community, who’ve rallied to help since his diagnosis. A wonderful charity called Firefly in Doncaster has supported him by collecting him from home each day during his radiotherapy, to take him to and from Weston Park for his treatment. Having to give up his driving licence has been a massive thing for Dad, as he would normally be the main driver in his household. The Firefly charity was created by a guy called Paul who takes on volunteers that drives cancer patients to and from the hospital each day. This was so helpful and enabled my dad and the other patients to build a rapport and a sense of camaraderie between them. It also gave Dad some independence and took the pressure off Mum having to drive him. 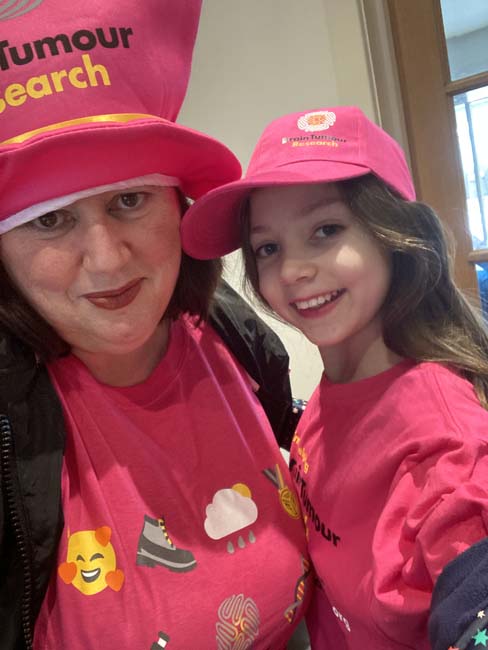 I was also keen to do my bit to help, so, when I saw the 10K Steps a Day in February Challenge advertised on Facebook, I signed up to raise money for Brain Tumour Research. I always say that I’m built for comfort, not speed, and the only time you’ll see me running is when the chippy’s shutting or if it’s last orders at the bar! Walking is something I can do, however, and as a teaching assistant, I tend to clock up around 8,000 steps a day at work. I initially set my fundraising target at £150, hoping I’d be lucky enough to reach that amount. I wore my Brain Tumour Research t-shirt and bought a big charity-branded hat. Franchesca also got involved and wore her Brain Tumour Research t-shirt and baseball cap with pride. In spite of the miserable February weather, we smashed our challenge and the fundraising went better than I ever could’ve anticipated. At the beginning of March, I hosted a fundraising event at my local pub, The Cavalier, with raffle prizes and a mini auction. I was overwhelmed by the generous donations I had, which included vouchers from the local Dominoes, El Lupos restaurant in Rotherham and Rotherham United donated a signed shirt. It was a fantastic evening. Mum and Dad came and I was balled over to raise a total of £3,105. 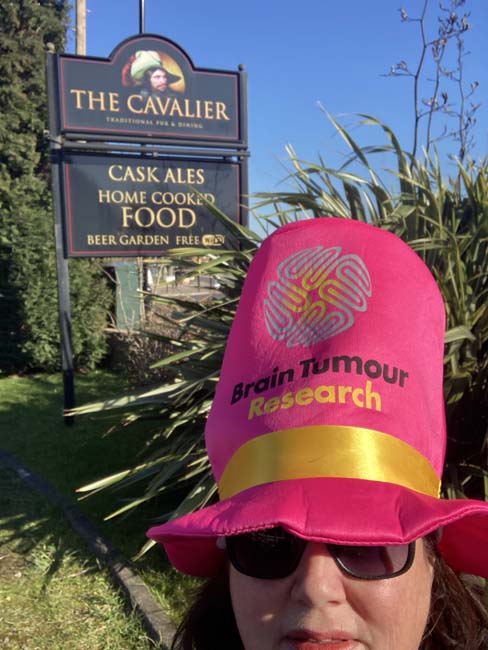 I’m really proud and grateful to everyone who has supported me. I just want to do as much as I can. It’s been such a hard time but this is something positive I’ve been able to focus on. 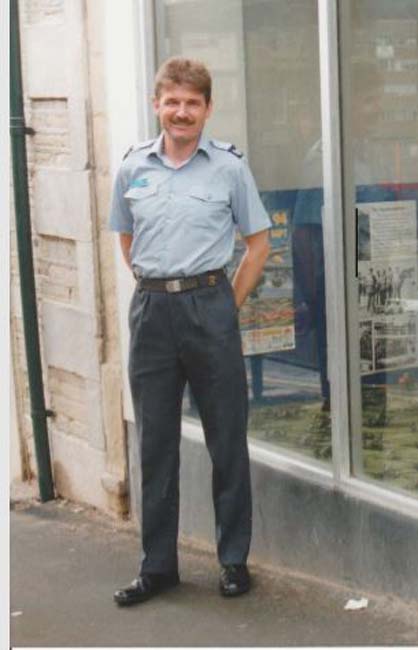