After experiencing months of crippling migraines, sickness and balance issues sports-mad Chris was diagnosed with a brain tumour at just 15 years old as he was due to sit his mock GCSEs. Now 25 years on, Chris looks back and counts himself lucky that his tumour was low-grade and able to be removed by surgery, as many others are not so fortunate.


“When I was told I had a brain tumour and that it was the cause of all my symptoms that year, I was actually quite surprised, though my parents were obviously very upset. My initial thought was could I still play football and when could I leave to go see my friends. We were told that it was low-grade tumour, about the size of a golf ball and I would need surgery to remove it. There was and still is very little known about brain tumours and what causes them, so when the consultant said they were confident that they could get it all out, this news didn’t stop my parents from worrying about me.”

Looking back on my teenage years, I was sports mad, just like any other kid and loved playing football every week for my school and town club. I was very active like my two brothers and if I wasn’t playing football, I would be playing tennis or out and about on my bike.

At school, I was very academic and had been predicted straight As for my GCSEs, so as I headed towards my mock exams I was confident that I would get the grades I needed and be able to enjoy my summer holidays. But that summer of 1991 wasn’t what I had planned.

I had been experiencing migraines for several months and having episodes of passing out and being sick. My family thought it might just be exhaustion or a bug, but when my Mum got a worried call from my school saying that I ‘appeared to be drunk’ and students had seen me stumbling from the bus stop, Mum came and picked me up straight away.

She booked an appointment with the GP, who thought it might be exam stress or a virus as my family had first thought. However, when I blacked out the next morning at the kitchen table Mum took me straight to a private specialist, as she knew the GP was wrong. The consultant took one look at me and said we needed to go to the hospital, as he could see pressure building behind my left eye and this could be something more serious.

I remember little of that initial appointment at the hospital. When you are a teenager your parents often take control of these types of situations and try protect you from hearing upsetting details. I think I knew that something was wrong with me, but at the same time I was just wanted to get out of the hospital and go back to school.

When I was told I had a brain tumour and that it was the cause of all my symptoms that year, I was actually quite surprised as I thought it was going to be something less serious. However, my next thought was could I still play football and when could I leave to go and see my friends.

My parents were obviously upset by the news, but were reassured by the consultant it was a low-grade tumour, about the size of a golf ball and could be removed by surgery. There was, and still is, very little known about brain tumours and what causes them, so when the consultant said they were confident that they could get it all out, this news didn’t stop my parents from worrying about me.

The operation was long and recovery was painful. Being a teenager who was normally very active, I found being confined to a hospital bed limiting and all I remember was how bored I was. Luckily, this was short-lived as I was allowed to return home after a few weeks under the agreement that I would be regularly visited by a nurse. However, this meant no football, which was the last thing I wanted to hear.

After spending my summer holidays mainly on the sofa, I was able to go back to school sporting a slightly odd haircut, so my scar down the back of my head was hidden. Mum insisted that on the advice of the doctor, I shouldn’t play football because of the risk of falling and hitting my head. I remember begging her to let me play and she said that she would let me play for the final year of school, but then that was it.

Only my family, football coach and headteacher knew what I had been through that summer. We are quite a private family and I think we wanted to deal with it in our own way. I have two brothers and although they weren’t little at the time, I didn’t want attention or special treatment for being ill. I just wanted to go about school as if nothing had happened. Many of the symptoms I had experienced prior to the surgery had gone, though I really struggled with my memory when I returned to school and had to have extra tuition to get through my exams. I didn’t get the GCSE grades I was predicted, but life does throw curve balls and you just have to get on and do your best.

At the end of year assembly, the headteacher got up on stage to hand out the year 11 awards. He looked slightly upset while talking about how one pupil underwent a major operation, but defied the odds to play in the school football team. I looked round and thought ‘who’s this kid, do I know him?’ and then they called my name saying I had won a bravery award. The girl next to me looked at me shocked, saying she had no idea I had had surgery and started to cry, which really took me by surprise, as I had just got on with school and getting my life back to normal.

It’s been over 25 years since I stood on that stage, and now looking back as an adult I feel very lucky that my tumour was low-grade and was able to be completely removed, as so many others who are diagnosed with brain tumours are not so fortunate.

My wife’s uncle, Mark, was recently diagnosed with a grade four glioblastoma multiforme (GBM) a really aggressive tumour and is currently receiving treatment to fight the disease. It just shows that brain tumours can affect anyone of any age, but no one knows what causes them. I really had no idea that less than 20% of those diagnosed with a brain tumour survive beyond five years compared with an average of 50% across all cancers.

My life did change after the tumour, as I stopped playing football after school but that didn’t stop me having sport in my life. My jobs after school always involved an element of sport and I took up golf and running in my free time. My Mum probably still keeps an eye on me to check I’m OK and looking back, when the consultant, spoke to me at my last appointment after the surgery and said “you have never met me, go get on with your life”, that is exactly what I did and will continue doing. 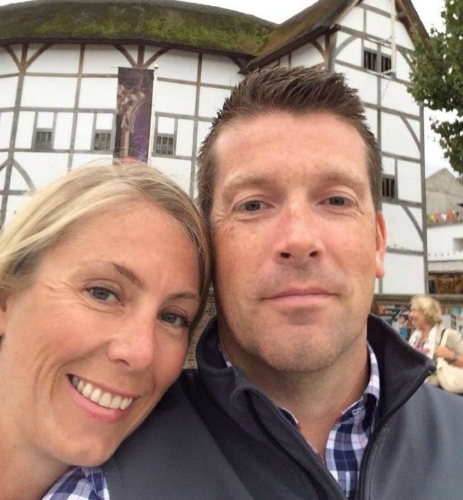