Number 13 definitely turned out to be unlucky for me – I was diagnosed with a meningioma brain tumour on our 13th wedding anniversary.  Surgery left me with vision and balance issues – I feel very dizzy walking any distance and suffer with extreme fatigue which means I regularly find myself needing to sleep during the day.  Obviously, I had to give up my driving licence.  I now get around on a mobility scooter which isn’t what I ever imagined I would be doing aged 41 as I am now.

“It seemed completely surreal when I heard the words ‘brain tumour’ as that thought hadn’t even entered my head.  I found myself pacing the corridors of the hospital, crying and swearing (which isn’t like me), while my husband kept trying to hug me.  The date was the 23rd May – a day I will always remember because we should have been celebrating  our 13th Wedding Anniversary!”
I have always worn glasses, well certainly for as long as I remember, so I am used to having routine eye tests.  At one such appointment back in the spring of 2011, the optician asked a colleague to come in and give a second opinion.  They both confirmed that the nerves at the back of my eye were raised, which can indicate a build-up of pressure, so I was given a letter to take to my GP.  Looking back, I suppose I should have realised that as the letter wasn’t sent in the post, I should have attached more urgency to seeing my doctor.

Two days later the optician rang to see if I had been to the GP.  She told me I had to go the very next day.

I had no symptoms, but I found myself being referred to a neurologist within two weeks, who thought it was a spinal fluid issue, rather than anything more sinister.  I was told I would need a lumbar puncture, but first they would do an MRI just to rule anything else out.  I wasn’t particularly worried because I didn’t have any symptoms and genuinely thought that there was nothing sinister behind it.  I am a person who takes things in my stride.

I had the MRI on a Friday and I really started to worry when I got a phone call later that same day asking me to come back to John Radcliffe on the Sunday for an MRI with contrast (that’s when a dye is introduced via an intravenous catheter into a vein in the hand or arm to highlight the blood vessels in the brain which helps to produce a more detailed picture) followed by an appointment with the consultant on the Monday.  I completely fell apart. I knew they must have found something dreadful as nothing in the NHS moves that fast otherwise.

The consultant broke the earth-shattering news that I had a tumour bigger than a tangerine inside my brain.  It absolutely floored me, particularly as I had been walking around with absolutely no neurological symptoms.  It seemed completely surreal when I heard the words ‘brain tumour’ as that thought hadn’t even entered my head.  I found myself pacing the corridors of the hospital, crying and swearing (which isn’t like me), while my husband kept trying to hug me.  The date was the 23rd May – a day I will always remember because we should have been celebrating our 13th Wedding Anniversary!

A few days later, I underwent a lumbar puncture.  I thought I was going to be in hospital just for the day as the consultant told me that I would have surgery later in the year.  However, terrifyingly, it turned out that my spinal fluid level was so high that I would need surgery that week.

I freaked out, but the focus of my concerns was on much more mundane matters (probably to avoid thinking of exactly what the brain surgery would entail).  I was worried I had no new pyjamas and that I hadn’t had my hair cut, that there were no meals for the family in the freezer, that I hadn’t cleaned the fridge…  They were all stupid things, but at least they were things I had control over, unlike what was going on inside my head.

On the day of my surgery, my sister took my two children, Daisy then 10 and Dylan, then six, to church to light a candle.  Dylan wished for me to get better and to tell him when I was better and Daisy made a wish for the surgeon to have a good day!

During the craniotomy, which lasted nine hours, surgeons tried, but failed to get all of the tumour out from the occipital lobe at the back of my brain.  It was too risky for them to attempt to remove any more than they did.

Since surgery, my life has changed dramatically.  Having left Tring School at 16 and then attended Aylesbury College where I studied for a NNEB, I have always worked – first as a nanny and then in pre-schools and schools, working with special needs (SEN) children as my own children got older.  When I was diagnosed, I was in my first year of a degree course, training to be an SEN teacher.  I was also working part-time at my daughter Daisy’s school, Leighton Middle.  They were phenomenally good to me and Daisy during this terrifying episode of my life.

As I can’t work anymore, we have gone from being a two salary family to having to rely on just my husband’s – he works long hours in London as a Mechanical & Engineering Manager and luckily his company has been very understanding.  It has meant we have had to cut back on the things we used to enjoy and we are having to downsize our house and will be moving hopefully early in the New Year.

I regularly have to go to bed and sleep during the day because I suffer with extreme fatigue, when before I was always doing things, and, when I get tired, my vision gets worse and I have blind spots.  Because of my dizziness and balance issues, I can’t walk any distance, so I am reliant on a mobility scooter to get around.

I used to do a lot of swimming (as a child I took part in swimming galas) and it took a long time before I could get back to that, but now I always have to go with someone else – I am so reliant on other people, particularly as I had to give up my driving licence.  One thing that I love, however, and which I took up after I found I had a brain tumour, is sewing.  It helps me stay positive.

The effect of my diagnosis on my family has been immense.  Daisy, the eldest, seemed to deal with it better, at least on the surface, but Dylan, who is autistic, found it really tough.  It exacerbated his anxiety tremendously and he would often refuse to go to school because he was so worried about leaving me.

The hard thing is that people look at us and think we are a normal family.  They don’t understand and can be very intolerant.  I am so appreciative of the close friends we have who understand when my son has a meltdown or I am so exhausted I just need to go to bed.

In hindsight, I can see that, in fact, I did have symptoms.  I always had headaches and was a migraine sufferer, but it did get a little bit worse leading up to my diagnosis, although not enough to be unduly concerned.  My eye sight was deteriorating more rapidly and I was getting new glasses every six months by then.  I also developed vasculitis – a condition when, for some reason, the immune system attacks healthy blood vessels, causing them to become swollen and narrow.  I kept asking the GP what was causing it, but he didn’t know.  I also felt SO tired.  Now I believe that these were signs that my body was screaming that something was very wrong.

My prognosis is uncertain – my consultant told me that the tumour will grow again – she hasn’t known anyone with my type of brain tumour where it hasn’t – so I have to go for regular MRI scans to check it is stable or whether I need more surgery and/or treatment.

I am passionate about supporting others with brain tumours as I know from my own experience that support is key to staying positive and I am also passionate about raising awareness.  People and GPs need to look out for early signs that might indicate the presence of a brain tumour and we need more research so that brain tumour patients benefit from more effective treatments and ultimately a cure.

I am blessed with very supportive parents who mercifully live close by and do huge amounts for me and whom I very heavily reliant on.  The strange thing is this year my Dad has been diagnosed with an acoustic neuroma brain tumour, so his journey is just beginning, and my Mum’s Dad died of a brain tumour when she was 11.  Nevertheless, we have been assured that there is no congenital link with me having a meningioma.

I also have to rely such a lot on my wonderful husband, Lindsay.  It has been very tough on him, but Lindsay is and has been amazing.  I would be lost without him.  Never have the words: ‘In sickness and in health’ been more tested. 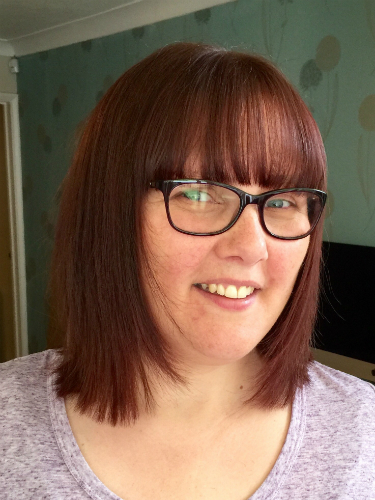