When Carol Hayes was sent to A&E in February 2018, she expected the worst and sadly her fear became reality. It was a brain tumour that had been causing her constant headaches and affecting her vision. The 56-year-old is still trying to come to the terms with her diagnosis but she remains positive as she undergoes six months of chemotherapy.

“Shortly after, my worst fears were confirmed: I had a brain tumour. It was like a truck had hit me in the chest but somehow the news just didn’t sink in… Nothing can prepare you to hear that, and even though I’d been worried I had a brain tumour, I couldn’t believe this was happening to me.”

It’s been nearly six months since I was diagnosed with a glioblastoma and yet it still feels so surreal. Apart from my vision issues, I feel relatively well within myself and so I haven’t quite wrapped my head around what’s happening to me.

Not being at work has been difficult but I know I need the rest. I’ve worked at the Old Bailey as a court clerk for nine years and it is such a fascinating place. I was actually a dental nurse beforehand but after attending jury service there, I knew I had to apply for a job. I guess losing my independence has been a struggle; I’m restricted by not being able to drive and I can’t leave the house much as I need help crossing the road. My confidence has definitely taken a knock too.

The first sign that something wasn’t right was daily headaches. I think this happened for about two months before my diagnosis in February, but it could have possibly been longer as they were fairly mild headaches and they didn’t stop me from doing anything. However, the headaches became more persistent so I took myself to the doctor to find out what was going on. The best way I can describe it is it felt like a never-ending hangover – not unbearable but not pleasant either.

The GP thought I may be suffering from migraines and referred me to an ophthalmologist for further tests. My daughter, Gemma, who is a doctor, dismissed the idea and said that people don’t just start having migraines in their 50s. I feared the worst: my parents had both died of cancer which made me jump to the worst-case scenario which, in this situation, would be a brain tumour. I asked the GP and the ophthalmologist if there was anything sinister going on but they were confident that I had nothing to worry about as my optic nerve wasn’t swollen.

My actual diagnosis came about in a totally unexpected way. Later that month, I was walking to work and I bumped into someone I couldn’t see. I looked around in confusion and realised that my peripheral vision on the left-hand-side had completely gone and I couldn’t see anyone around me. I was absolutely terrified so I ran into the nearest opticians and asked for an urgent eye test.

The optician sent me immediately to A&E where a consultant suspected I’d had a stroke. It just seemed so bizarre to me that I could have had a stroke. I was fit and healthy and just three days before I’d run four miles – how could I have had a stroke? Gemma joined me at the hospital and I went in for a CT scan.

Shortly after, my worst fears were confirmed: I had a brain tumour. It was like a truck had hit me in the chest but somehow the news just didn’t sink in. Gemma, who knew what this diagnosis could mean, was devastated but I was just in complete shock. As I reeled from what I’d just been told, Gemma rang my husband Gary and our son James to let them know. Nothing can prepare you to hear that, and even though I’d been worried I had a brain tumour, I couldn’t believe this was happening to me.

James and Gary arrived and they’d had the car journey from our home in Sidcup to Kings’ College Hospital to be upset about my diagnosis. By the time they’d reached me, Gary had his practical hat on and said ‘right, we’ll deal with it’ whilst James stayed quiet and didn’t show how he was really feeling. Gemma, obviously, knew more about the disease than she would let on.

I stayed in hospital for a few days and was put on steroids to ease my symptoms. Then a few days later I was sent home for two weeks to wait for surgery. It felt like forever.

My operation lasted for a couple of hours and the results were really positive. The surgeon said they’d removed it all, but then backtracked slightly and said they’d removed ‘everything they could see’. I was happy with this though as I couldn’t have hoped for much more, and it was a relief to see a big black hole in my brain where the white mass of the tumour used to be.

A couple of weeks later I was invited back to discuss the results of the biopsy. Gemma had warned me to expect three words: ‘aggressive’, ‘chemo’ and ‘radiotherapy’. She made me promise not to Google anything about the tumour type because the stats I’d find are not based on my situation. The tumour was a glioblastoma, a highly aggressive type of brain tumour, but the consultant believed I would respond well to chemotherapy because the tumour had methylated cells. I refused to hear my prognosis because it would only make me dwell on the negatives.

It wasn’t long before I was back at the hospital undergoing six weeks of radiotherapy. I hated the mask and I lost a lot of hair but I just had to keep reminding myself that it was a means to an end. I bought a wig for when the hair loss increased but wearing my hair up to disguise the patches seemed to do the trick.

The first scan after radiotherapy was a worry because the black hole where the tumour had been now had a thick white line around it. The consultant said it was just swelling so I hope it will be gone by the time of my next scan. I started chemotherapy at the end of June and although I’ve been quite tired, the side effects are only moderate. Gemma has warned me that it may get worse over the course of the next six months but I have no choice but to get on with it.

It’s still hard for me to come to terms with all that’s happened. My life has changed so quickly and it’s as if I haven’t quite caught up. For now, I’m just taking each day as it comes and treasuring the time I have with my family. I can’t deny it’s scary having a brain tumour, but you just have to stay positive and trust in the doctors to do what’s best for you.

In May, my lovely colleagues raised £3,500 to help the Brain Tumour Research charity fund research into brain tumours. They held a quiz night in the grand hall at the Old Bailey and thankfully I was feeling well enough to go along. I even got to meet Shaun Wallace from The Chase who was quiz master for the night! It was such a brilliant night and their support means the world to me. 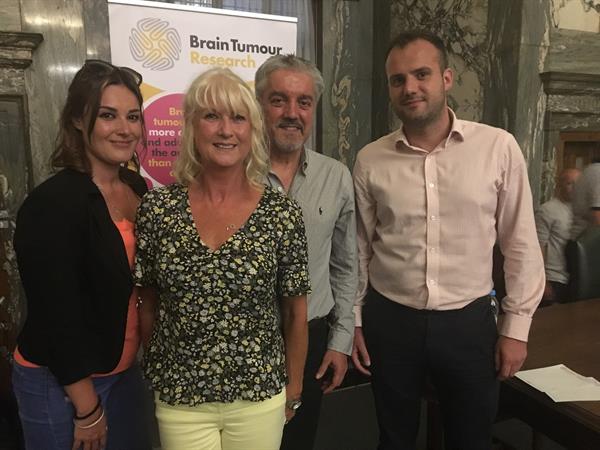