Bradley was diagnosed with an inoperable brain tumour at the age of three and underwent radiotherapy. Apart from headaches, his life continued as normal until he was 18 and had to be flown home by air ambulance while on holiday for a surgical procedure to help relieve pressure building up in his head. Then at the age of 23, following a massive seizure, he had a 10-hour operation to attempt to remove the ‘inoperable’ brain tumour. Miraculously, the neuro-surgeons succeeded in removing 95% of the tumour. In the years since his surgery, Bradley has worked hard on his rehabilitaton and now, aged 29, can walk almost perfectly, although he is waiting to have Botox to help regain movement in his right hand.

“My neuro-consultant was becoming very concerned, but he still didn’t want to take the risk of trying to remove the tumour, due to its dangerous position and the risks of life-changing consequences. However, one day I had a massive seizure and the doctors were unable to bring me round. The pressure had built up to a dangerously high level which meant there was no option than to operate to relieve the pressure as quickly as possible. I had the emergency procedure and was taken to the High Dependency Unit and put into a coma. Meanwhile, my parents were told that it was now imperative to attempt to remove the ‘inoperable’ tumour once the pressure in my head had been reduced and I had returned to a stable condition.”

I was three years old when my parents noticed I was stumbling a lot, so they took me to the GP. We were told that it was probably a ‘lazy hip’ and it was nothing to worry about. However, I then began to pass items from my right hand to my left and this was picked up at nursery school who advised my parents to seek a second opinion. We were referred to a paediatrician.

I had an MRI scan and it was then that my parents were given the devastating news that I had a brain tumour, which was diagnosed as a grade 2 astrocytoma. As it lay deep within the brain, it was deemed inoperable, however, as it was ‘cystic’, it could be reduced in size by a procedure in which fluid was drawn off to reduce the pressure building up in my head.

The procedure was carried out at the Radcliffe Infirmary in Oxford (in the days before the John Radcliffe Hospital), followed by six weeks of radiotherapy. I had to be fitted with a special mask to keep my head firmly fixed to the table during the radiotherapy sessions.

The first few sessions of radiotherapy went ahead with me fully conscious, which was quite something for a three-year-old apparently, as I had to be left in the room alone while this huge machine was rotating around my head. Then, during one of the sessions, I felt I was falling off the table, which was very scary, and so from then on I had to have a daily general anaesthetic. I was also pumped full of steroids which caused my weight to double in a matter of weeks, and changed me from the usual easy-going child I had been to a very difficult one!

For a few years afterwards, my life calmed down and was as ‘normal’ as could be expected. I did well at school, despite being told that my concentration might be poor as a result of my treatment. I took part in sports, with the exception of rugby, and didn’t have any real problems again, other than a few headaches, until I reached the age of 18.

I had just completed my A’ levels and been given a place at the University of Portsmouth to study media. The family booked our yearly Mediterranean cruise, which I always loved, but this year I had begun to feel unwell. We all put it down to the stress of exams and anxiety about going to university.

Several days into the holiday, however, the pains in my head became unbearable. I was taken to see the ship’s doctor and told him my past history. He performed a few tests on me and told me I needed a scan when we got into port on the Greek island of Cephalonia the following day.

The scan showed a mass on the brain and we were told we couldn’t return to the ship or fly home unless it was a medical evacuation which meant a private air ambulance accompanied by two doctors.

We were in the worst possible situation, but my dad, with the help of P&O’s port agent, managed to get this organised and I was flown back to the UK where I had an operation at the John Radcliffe and was fitted with an Ommaya reservoir, an intreventricular catheter system to allow the aspiration of cerebrospinal fluid without the need for a surgical procedure each time.

We decided that it would be best to postpone going to university for a year to let things settle down. Again life was pretty normal, apart from the fact that I was experiencing far more headaches than ever before.

I started university in 2010, aged 19, but after three months I knew it wasn’t the life for me so I came home and began working in the family business. I also started college to learn accountancy.

Suddenly, at the age of 23, I began having seizures, something I had never had before. The fluid in the reservoir was building up far more quickly than ever and it was necessary to withdraw fluid every few weeks, rather than every few months as previously.

My neuro-consultant was becoming very concerned, but he still didn’t want to take the risk of trying to remove the tumour, due to its dangerous position and the risks of life-changing consequences. However, one day I had a massive seizure and the doctors were unable to bring me round. The pressure had built up to a dangerously high level which meant there was no option than to operate to relieve the pressure as quickly as possible. I had the emergency procedure and was taken to the High Dependency Unit and put into a coma. Meanwhile, my parents were told that it was now imperative to attempt to remove the ‘inoperable’ tumour once the pressure in my head had been reduced and I had returned to a stable condition.

As you can imagine, it was a very traumatic time for everyone. After 10 days, the pressure was down to an acceptable level and a 10-hour operation took place. In the words of my neuro-surgeon: “It couldn’t have gone better!” With a new type of tracking system used to weave in and around certain areas of the brain, they had managed to remove 95% of the tumour. This was certainly fantastic news!

It felt strange in the early days following the operation – I was confused and my memory of some things was very poor. I couldn’t recognise any everyday objects, like “a plate” or “a spoon”, which was very worrying. However, the neurosurgeon explained that the part of the brain which had been damaged would eventually be compensated by the other side. Indeed, as time went on, this is what happened.

I was unable to walk at all for the first few days, but gradually, as time went on, and with help and support, I was able to take my first steps. Every step was a challenge and I began to set myself targets to achieve. They began as very small ones because I would get tired so quickly in those early days and were both mental and physical. I am a fighter and will never be beaten.

I began to ‘brain train’ with the help of certain online activities and games to help me with my concentration. I also spent many hours focusing on a children’s picture dictionary to help improve my recognition of everyday items.

I also went to physio a couple of times a week to help achieve physical targets, including learning how to improve my walking style, having suffered with ‘foot drop’ – a weakness or paralysis that limits your ability to raise the front part of your foot.

When I was finally discharged from the hospital in Oxford, I went for neuro-rehab at the Royal Berkshire Hospital in Reading. My neuro-physio, Karen, and I got on brilliantly from day one. She recognised my determination to recover and said she looked forward to our sessions as I had such a positive outlook.

A weakness down my right side is the only lasting damage. I continued to have physio, and now, three years later, thanks to my wonderful surgeons and physios, I am almost back to living a normal life.

Unfortunately, I had my driving licence revoked, due to a loss of peripheral vision, but I am working almost full-time in our family business doing computer book-keeping and accounts. Not bad for someone who, following surgery, couldn’t even recognise a cup!

I use a functional electrical stimulation (FES) device to stimulate the nerves in my right leg to help give me an almost perfect walk. The treatment applies small electrical charges to muscles that have become paralysed or weakened due to damage in the brain or spinal cord. Currently I am awaiting Botox injections to help regain the use of my right hand. Otherwise, my challenges have been overcome, although I will never stop trying to improve my life and well-being. I know I have been lucky to have been given a second chance and I am going to make the most of that.

Words cannot express the respect I have for the expertise of my surgeons and doctors, without which who knows what may have happened. I will forever be thankful to all these amazing people, as well as all my friends and family who have shown their tremendous love and support throughout my ordeals. 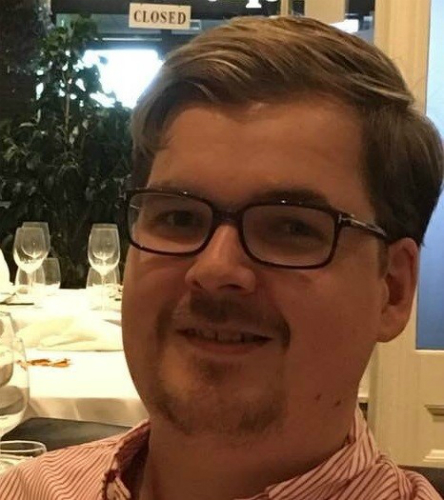