Bethany was just nine when an apparent minor allergy to oranges preceded her shock brain tumour diagnosis. Her Mum, Trish, saw her little girl happily dancing around the kitchen to One Direction before screaming out that her head was on fire and collapsing. Despite the years of surgery, hospital appointments and medications that followed, Bethany is now a bright and positive fourteen-year-old, eager to live her life to the full while knowing that her condition will be life-long.

“There’s a lot that I don’t completely understand, some things that I don’t even remember, but I still have to cope with it all anyway. The tumour doesn’t care if I understand or not.”

Everyone thought I was probably just allergic to oranges or something. I was nine years old when I started complaining about headaches and sickness but, as I always seemed to be sick soon after eating an orange, we all thought they must be disagreeing with me. This went on for about six weeks, starting just before Christmas in 2012. The GP had told my mum it was likely to be some kind of tummy bug and that seemed to be all it was.

Then, in January, I was dancing around the kitchen to One Direction - Mum was telling me to turn it down a bit – when suddenly it felt like my head was on fire! I remember running in to the living room, holding my head in pain and screaming, before passing out. It was only a few months since we lost my dad after he collapsed in front of me suffering a stroke, dying later in hospital after a brain aneurysm, so that made it even more scary.

I was rushed to hospital with my mum, Trish, and step-dad, Steve, coming in and out of consciousness and feeling horrible. It must have been terrifying for them; I can’t remember very much about it. I couldn’t see out of my right eye. Scans, which my mum had to explain to me as a kind of x-ray, identified the tumour and I heard the word cancer for the first time.

They transferred me immediately to Sheffield Children’s Hospital for surgery, performing the operation up my nose. Even now, after years of medical treatments, the idea of that still freaks me out! My tumour is in a really awkward position, on my optic nerve, so it’s very tricky to get to. My vision was affected quite badly and we were told that it was very unlikely that I would ever get the sight back in my right eye. I was in hospital for a few weeks, with lots of tubes and cannulas, but the surgery went well. My family, including my younger brother and sister visited me on the ward, but it was winter and there were days when no one could get through the snow. It was very lonely sometimes.

There were children sicker than me in the ward and I started getting scared about what was going to happen. Mum talked to me very carefully, explaining that I had a tumour called a ganglioglioma but it wasn’t cancerous. She told me how children with cancer get very poorly and need special medicine that sometimes made them lose their hair. I was back at school by March, going to the school disco and out to tea for my 10th birthday. My teachers were lovely but my friends were too young to really understand about brain tumours. They could see I was okay though, just getting headaches occasionally.

For three years, I was living a relatively normal life, going to school but also needing regular hospital appointments to keep an eye on things. It wasn’t just the tumour that was the problem, it also led to other conditions. I have diabetes insipidus and there’s also my growth hormone deficiency, which was really bad when I was first diagnosed, but seems to be improving. I wasn’t growing taller, but still put on weight, so I suppose I was growing but just outwards! I have to really look after myself and do all the usual things like exercise more and eat healthily, as there’s the risk I could balloon again. Mum has lots of doctor’s appointments and medications to remember for me, as well as my three-monthly MRI scans.

As I’m getting older, I am taking more responsibility for my conditions. I still love pizza and smoothies but also make sure I go out for long walks and do work-out videos on YouTube. I have been bullied because of my lazy eye, so that can be hard to deal with on top of my medical worries. YouTube has been one way that I have coped with it all. I love watching videos and this year I started to post them myself. It’s a good way to talk about my illness and other things I am interested in, like make-up.

Early last summer, in 2016, I started getting really terrible headaches again. I would be screaming with pain and never wanted to get out of bed. My family were very worried so we went back to the hospital for an MRI scan. It’s all quite familiar at the hospital now, I know the doctors and nurses and a lot of the other children too.

The scan seemed to show that my tumour had grown and the doctors recommended a course of chemotherapy. I didn’t really know what this was before. They fitted my “port” in the armpit, which is pretty uncomfortable and weird, but I thought it would be worth it. I had the idea that the chemo would battle the tumour and get rid of it. Unfortunately, it didn’t have that effect with me. It barely made any difference. I was still getting headaches and the tumour wasn’t shrinking, despite me losing my hair.

By October they stopped the chemotherapy, after three months, but didn’t seem to have any other treatment options for me. My headaches were very painful all over Christmas and New Year which was depressing as Christmas is my favourite time of the year. We have some really nice traditions. The family are all together, opening presents in our pyjamas and then playing board games after lunch… I never win!

Then in January 2017, four years on, almost to the day, since I collapsed and had to face my first surgery, I was facing my second. It was like going back to the beginning again. This time they were removing a cyst growing on the tumour. There’s a lot that I don’t completely understand, some things that I don’t even remember, but I still have to cope with it all anyway. The tumour doesn’t care if I understand or not. This time they had to properly open up my head so I have a horse-shoe shaped scar from it. Luckily my hair mostly covers it, the scar has caused a kind of automatic parting!

The medication around the surgery seemed to cause really bad seizures for a week or two and at one point they had to test my brain function to see how bad things were. Next they discovered that I had hydrocephalus, a massive ball of fluid in my head, and needed another operation to fit a shunt to drain it. Mum was really worried. I find it a bit weird that my brain fluid drains down to my stomach, I can feel the tube inside my skin on my head and neck, but without the shunt I would have a massive lump of fluid on the side of my head. Out of those two choices I prefer the shunt for the rest of my life!

After another six weeks of recovery I was finally allowed to return to school in March. I had missed most of year eight. People joke that they would love a year off school, but by the end of that time I was desperate to go back. Mum moved me after the bullying last year so now I go to a special school for children who have medical needs. There’s nurses there and the teachers are really understanding. It’s small and feels a bit like a family; there are even other children with brain tumours there so we can talk about it and support each other. I love it but the work is just as hard as a normal school!

We can never completely relax and think I’m fine. On holiday this summer, I spent most of the week in Barnstaple Hospital rather than on the beach. Tests showed that I was losing spots of vision. I don’t exactly understand what that means but reading is becoming harder; I have to move my head around more to see things. I am worried that I might lose my vision even more. I have already lost all of my vision in my right eye and half my vision in my left. There are so many things that I know I will never be able to do, so I really do not want my eyes to get any worse. It’s probably the thing I think about the most.

I found out last year that I will never drive a car and there’s a long list of jobs that would impossible for me now. When I was younger, I never thought about driving or anything like that, so I did get quite upset when I discovered that there’s another thing I won’t ever get to try. I am a creative person so would love to be a photographer, artist or make-up artist. I also like the idea of being a nurse, but I don’t know if I would be allowed with my bad eyesight. The last resort would be to have the tumour completely removed as that would probably leave me blind.

No one knows what causes brain tumours and because my dad died after a brain aneurysm, there’s the possibility that the conditions might be related somehow. My little brother was showing some worrying signs earlier this year so he had genetic testing to try to work out if there’s a link between us all. They haven’t found anything, but that idea is quite hard for Mum. I try to stay strong and positive, dealing with each thing as it comes along. You just have to get used to everything that happens, that’s what I have had to do really. This is my life so I’m making the most of it. 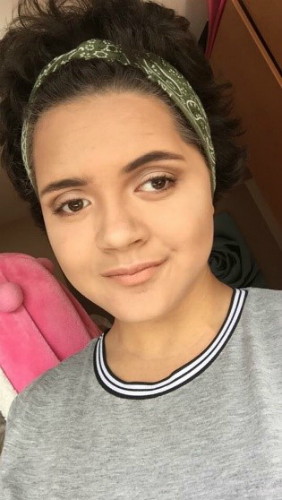