April was diagnosed with a grade IV medulloblastoma in 2010 during her first year at university after suffering with debilitating headaches. Her mother had recently been diagnosed with lung cancer and tragically passed away while April was receiving treatment following her brain surgery. She has since been given the all clear.
In the September of 2009 I went off to university in Plymouth.  It should have been the start of an exciting new chapter of my life, but Mum had just been diagnosed with lung cancer.

In January the following year, I started having really serious headaches and saw various different GPs who all diagnosed migraine and offered me painkillers.  They all thought that it was down to the stress of my first year of university and didn’t think it was anything serious.

As my headaches became worse I saw a total of 11 different medical professionals including GPs, A&E doctors and opticians, who diagnosed me with a variety things from migraines to sinus problems.  I was even given some glasses.  As a final attempt back at home in Kent after an emergency referral from my family GP, who requested an MRI scan for me, I went to King’s Hospital in London, but upon arrival I was told that I would have to go on a two week waiting list for an MRI.

Fed up with no one taking me seriously, I returned to university in Plymouth. Then the headaches became even more unbearable so I rang Derriford Hospital in Plymouth and begged for help.  After been seen by a doctor there I was finally given an emergency MRI scan that revealed I had a brain tumour.

I immediately had an operation to insert a shunt into my brain to drain the fluid which had been causing so much pressure, and hence the excruciating headaches, and then underwent a seven and a half hour craniotomy to remove the tumour.  I was told it was cancerous and that it was a grade IV medulloblastoma.  Apparently, if I had waited the two weeks for the MRI at King’s I would have died.

To give me every chance of beating the cancer, I immediately underwent six bouts of chemotherapy – one cycle every two weeks if I was well enough, followed by radiotherapy twice a day for five weeks and then a year of maintenance chemo.  Having chemo made me feel very anxious and it was tough losing my hair.

I took the whole of my second university term out but then returned and was fortunate enough to have a host of people round me who supported me so that I always had a friend to accompany me on hospital visits.

In April – while I was going through my chemo and radiotherapy – Mum passed away.  It was such an awful time, particularly as I hadn’t got to spend much time with my Mum because of my own problems, and after she passed away my health deteriorated further.  There was even a chance the doctors were not going to allow me to go to the funeral, but thankfully I was able to attend.

My sister gave birth to her second child in July.  Little Jake brought us all mixed emotions – great joy, but also such sadness that he would never know his Nan.

A month later a scan revealed no trace of the tumour and subsequent scans have all been clear.

I have now completed my degree and am working in Plymouth.  Since my diagnosis, I have met a lot of people with brain tumours and seen many who have lost their hair and have the “Frankenstein scar” on their head.  I have seen those who have suffered horrible side effects from their surgery or radiotherapy – people who have gone blind, lost mobility so that they have to learn to walk again and those whose personalities have altered almost beyond recognition.

I am definitely one of the lucky ones, having suffered no lasting side effects, but it just goes to show how important it is to support research into brain tumours to find more effective treatments which hopefully don’t have such an impact on the rest of a patient’s life. 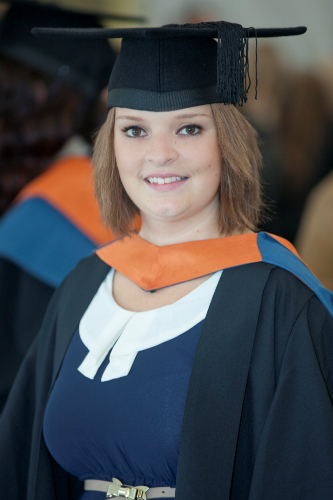