Ann was 24 and had been married to Alan for less than a year when she was diagnosed with a brain tumour. In March, National Brain Tumour Awareness month, she will undergo a craniotomy procedure to remove the low-grade glioma. She opted to have surgery rather than “watch and wait” as she wants to be free of the tumour when she moves into her new home and looks forward to starting a family.

“I was given a choice: watch and wait or have surgery to remove the tumour. I have opted to have the operation on the basis that I am fit and healthy and have been advised I can expect to recover well. Without doubt, this is a really big thing but I know that there will be people around me whose job it is to make sure I don’t die and that I maintain a good quality of life. If anything, I am more apprehensive about the recovery than the operation itself. I know that I will need some form of speech therapy although my surgeon did joke that I was really good at talking so he didn’t think that would be a big problem!”
We were a month away from celebrating our first wedding anniversary, looking forward to starting a family and planning a holiday to Florida when I got the news that no-one wants to hear.

Life had been looking rosy. Alan and I were both working and we were living in a rented house and looking forward to buying our first home together. I had been living with headaches on and off for six years when I finally went to the doctor in December 2015. The GP thought I was suffering from migraines or cluster headaches, and my referral to a neurologist was just to be on the safe side.

After that, I was sent for an MRI scan in February 2016, again I was told there was “nothing to worry about” and so I wasn’t unduly concerned as I waited for two weeks for the results. It was a shock to receive a letter in the post from a neurosurgeon at Southmead Hospital, Bristol, who wanted to see me to discuss an “acute signal change” which had been identified on my scan.

Accompanied by my dad, I attended the appointment on 22nd March and we were told I had a low- grade, slow-growing glioma brain tumour. It was ironic to think that while it was the headaches that had led to the discovery of the tumour, they hadn’t actually been caused by it. I had sought help for the headaches and found out about something far worse almost by coincidence. I was just 24 at the time and the whole thing seemed ridiculous.

As I heard the news about the tumour, I had a growing feeling of dread in my stomach. However much I tried to breathe, it seemed as if I just couldn’t get enough air into my lungs. I was in shock and disbelief. Things were being presented to us in such a matter of fact way. I excused myself and went to the bathroom where I broke down. I hadn’t wanted to cry in front of anyone else but now I was on my own I thought the tears would never stop.

My husband Alan left work early and I broke the news to him and mum at my parents’ house. I didn’t want to upset anyone so I deliberately down-played things saying there was something on my scan which looked like a little rain cloud and they wanted to have another look at it. I made it seem insignificant, like a small mole or spot on my brain.

I felt as if I needed to be brave for everyone else. The feelings of all the people I told that day were more important than my own. I took a few days off but not long and then went shopping with my mum to buy a new dress – I was determined to get back to work as soon as possible and I wanted to wear something which made me feel strong and powerful, I didn’t want people to think I was vulnerable. I am like the typical girl next door, except 6ft tall and covered in tattoos! I felt scared and defenceless but kept telling myself I was fine and I have maintained that outlook ever since.

My next scan was on 20th April. When the results came through, nothing had changed. It was great news and I was told to get back to my life as normal and go back for another scan in six months. I felt as if I had just been told I no longer had a tumour, that things were fine and I could have my life back. Our three-week holiday to Florida wasn’t going to happen as I was unable to get travel insurance and although that was a great disappointment, it wasn’t that big a deal compared to everything else.

Life went on until December 2016 when I got the results of my next scan and I was presented with a dilemma: leave the tumour and be scanned every year or have surgery now to remove it. I have opted to have the operation on the basis that I am fit and healthy and have been advised I can expect to recover well.

The tumour is the size of a golf ball and is on the surface of my brain on the left-hand side above my ear. I know there are risks but I no longer want it to be a part of me so on 23rd March, a year and a day after I was first diagnosed, I will undergo an awake craniotomy during which I will be conscious for part of the procedure. This will allow the surgeons to monitor my speech and cognition to ensure they are removing as much of the tumour as possible without causing damage to healthy tissue.

Without doubt, this is a really big thing but I know that there will be people around me whose job it is to make sure I don’t die and that I maintain a good quality of life. If anything, I am more apprehensive about the recovery than the operation itself. I know that I will need some form of speech therapy although my surgeon did joke that I was really good at talking so he didn’t think that would be a big problem!

I have a lot to look forward to: we have exchanged contracts on our first house purchase and we’ll be moving in May. I want to be tumour-free when we are in our new place and we are hoping that we will be able to look forward to starting a family too.

Someone told me once that your brain processes the signals for fear and excitement in the same way. Whenever I get scared I just tell myself that feeling of dread is just excitement. 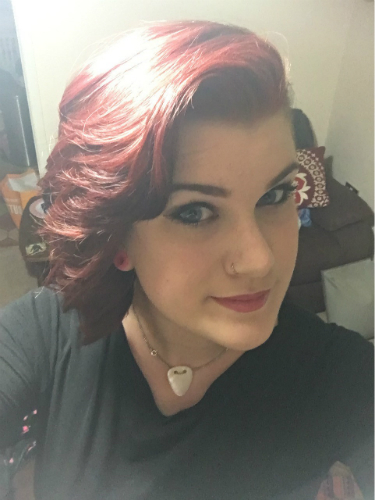