In September, three-year-old Anastasia Ogden, of Hailsham in East Sussex, was diagnosed with a fast-growing form of brain cancer known as atypical teratoid rhabdoid tumour (ATRT). After an emergency CT scan revealed her tumour was bleeding, causing it to expand and suffocate her brain, she underwent a life-saving surgery, where more than 90% of it was removed. It took her almost three weeks to come round fully and appease fears that she could have been left brain damaged. She has had two further surgeries to treat hydrocephalus, including one to have a shunt placed, and is now undergoing chemotherapy and radiotherapy.

Here is Anastasia’s story, as told by her mum Paulina …

Anastasia, who we call Mimi, has always been a really cheeky, sassy girl. She definitely gets her attitude from me, but she’s also very caring and loves playing with her friends and her brother Oscar, who’s six. She’s always kept me on my toes by being very active, jumping on our trampoline and generally running around. 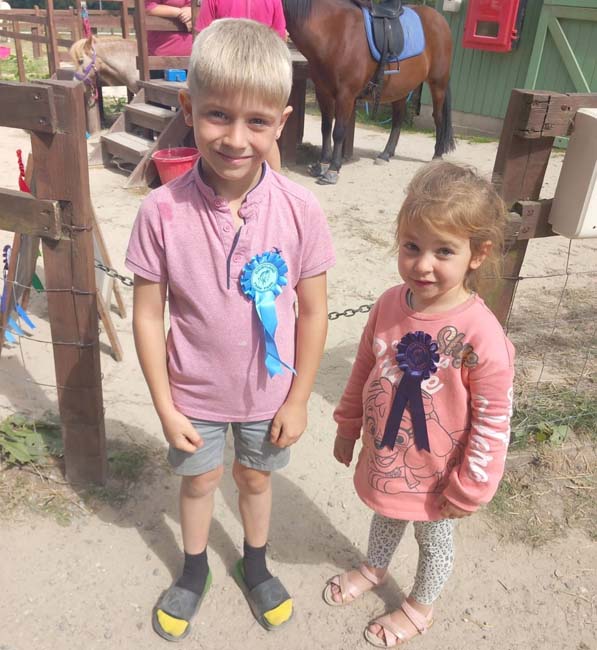 I had taken her to the doctor just before the summer holidays, in May time, because she was having headaches and feeling sick. My request for a head scan was refused and I was told she had either a sickness bug or a tummy migraine, which I’d never heard of but is apparently quite common in young children. 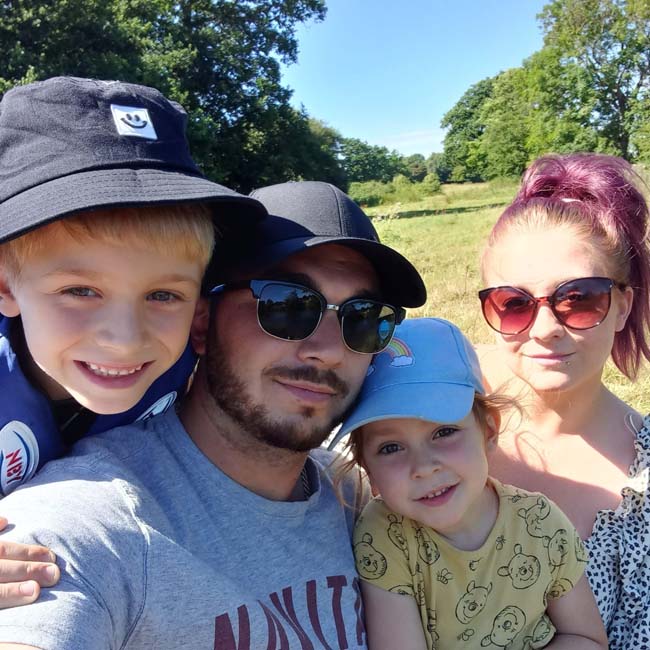 She was fine after that, going to nursery as normal and coming on a family holiday to Cornwall. She was just a happy and healthy little girl until 26 August, which was the start of the bank holiday weekend. She’d spent the day running and playing in the park and it wasn’t until we were walking back to my mum’s that she started feeling dizzy and losing her balance. It was a hot day so I wasn’t too alarmed and thought maybe she just hadn’t had enough to drink or had picked up a bug.

That night she was absolutely fine and the next morning we went to visit my cousin, who lives about 12 miles away in Seaford. It was whilst Anastasia was playing with her little girl that she took another turn, feeling dizzy, her head tilting to the right and getting so wobbly that she looked drunk. I knew that something wasn’t right and so took her straight to Brighton Children’s Hospital, which was the closest hospital at the time.

“Twenty-four hours later, we were told that she had a brain tumour and that’s when our whole world turned upside-down.” 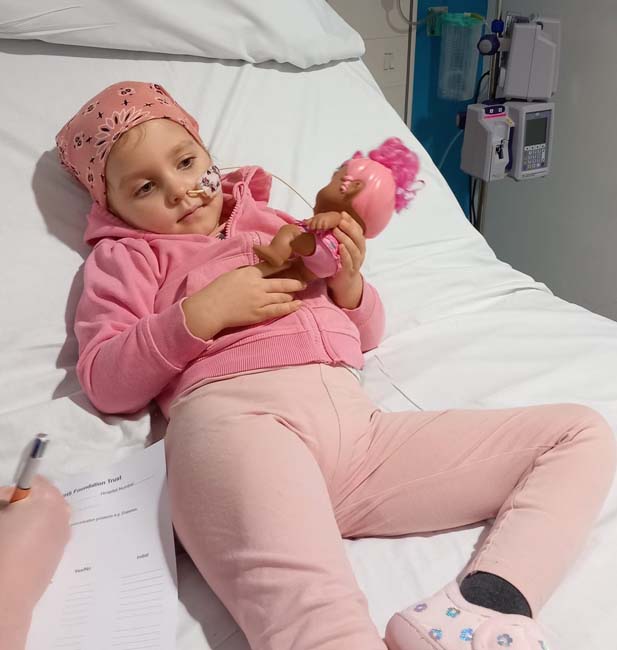 I thought that maybe she had an ear infection, which is why her head was tilting and her balance was off, but the hospital doctor sent her to the optometry department for an eye test. As soon as they started looking at her eyes, I knew that something was wrong.

“I pleaded for them to tell me what was going on and he said that Anastasia’s optical neve was swollen; as soon as I heard that, I thought tumour.”

When I told the hospital doctor what we’d been told, his face just dropped. He sent Anastasia for an emergency CT scan and, as soon as the results came back, he confirmed that there was a mass on her brain. We were transported by ambulance to King’s College Hospital, London, late on 28 August and it was there that Anastasia had her first surgery. They discovered that she had hydrocephalus so they needed to drain the fluid on her brain and they also took a biopsy of her tumour. 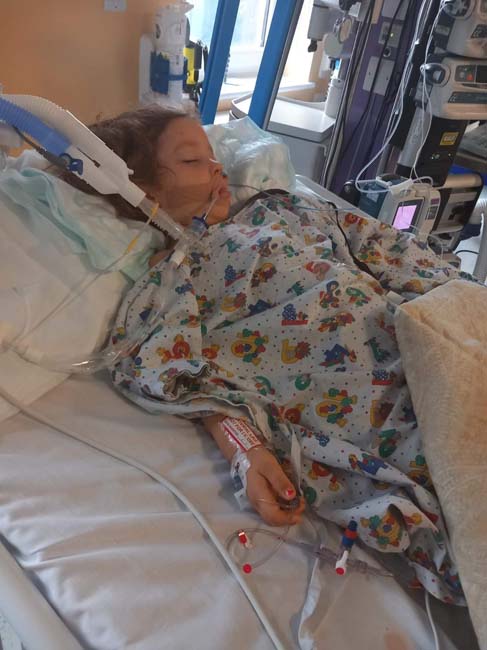 “Anastasia was walking and talking and recovering really well until three days later when she started vomiting, having seizures and became unresponsive.”

My mum and dad were at the hospital and Anastasia said she that was feeling tired so I told her to have a nap and went to take a shower. Suddenly, I heard her scream and ran back into her room to find her vomiting, then having seizures and becoming unresponsive. Her oxygen level dropped and the emergency button was pressed as I was ushered out of the room.

She was taken for an emergency CT scan, which showed that her tumour was bleeding. It was so full of blood that it had expanded and was pressing on the parts of the brain that are responsible for breathing, moving, speaking and swallowing; essentially it was suffocating her brain. My partner Jake wasn’t there at the time because Anastasia had seemed fine and so I’d sent him home to spend some time with our son Oscar. He rushed back to the hospital as Anastasia was taken into theatre for a life-saving surgery to cut her tumour out.

“We were told to prepare ourselves for the fact that she might not make it out alive; it was the longest 18 hours of my life! 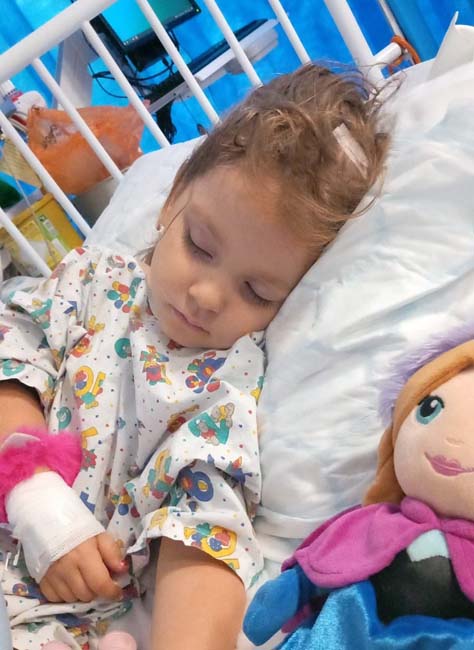 The tumour was more than 6cm long and 3cm wide but, as far as we’re aware, the surgeons managed to take out more than 90% of it. We were told that if they’d taken it all out, she’d have never woken up. As it is, it took her almost three weeks to come round fully. We didn’t know what to expect as we were worried she might have been left brain damaged. She woke up after a few days but just stared off into space.

“There was no communication and no movement; she just lay there with her eyes open, which was pretty scary to see. 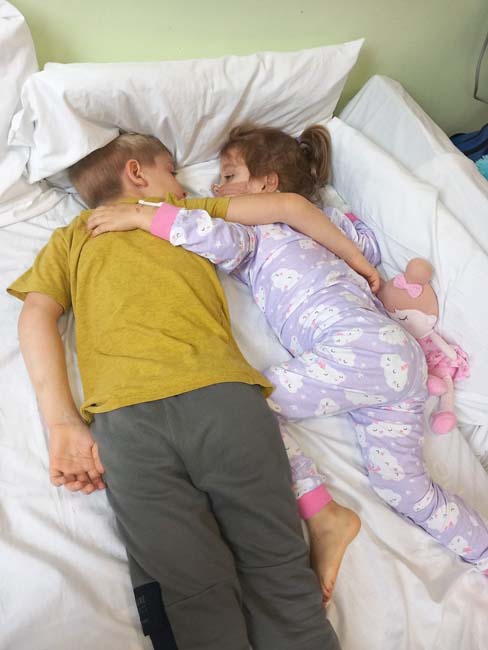 We didn’t want Oscar to see her like that but after a while we realised that she needed him and let him visit. They had a cuddle and I can’t help feeling that his energy helped her because it was just a day or two later that she started to talk and then had a bit of food.

“Her first words were Peppa Pig, which was incredible to hear after such a horribly long, agonising wait.”

On 2 September, we found out that Anastasia’s tumour is cancerous and called an atypical teratoid rhabdoid tumour (ATRT), which is a very rare but fast-growing tumour of the central nervous system. As soon as the surgeon said the oncologist would be coming to talk to us, I switched off. I couldn’t listen. I couldn’t think or even breathe and had to leave the room because I was in so much shock. I actually don’t remember much from that day and relied on Jake to take in all of the information we were given.

“I never imagined that our little girl would have cancer, or that she would have something so rare and dangerous.” 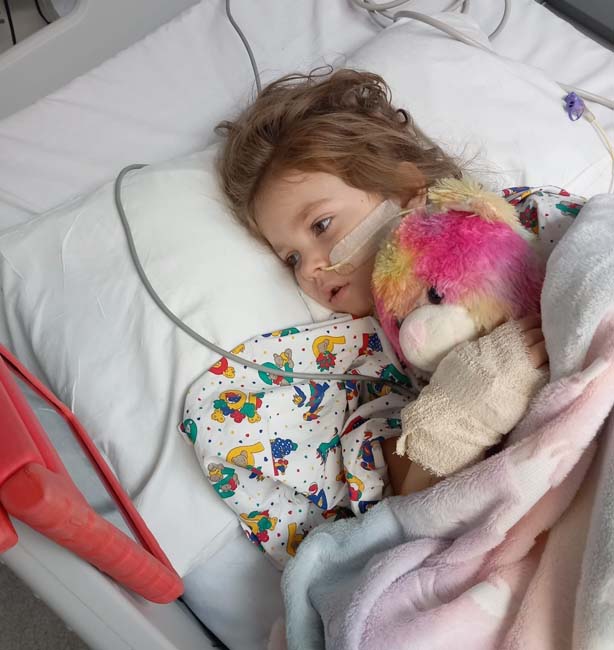 The plan is to shrink the rest of her tumour and the cancer cells, which have already spread to other parts of her brain and spine, using chemo and radiation. She had her first ever intrathecal chemotherapy on 29 September, which involved her getting a lumbar puncture and then having the chemo put directly into the fluid in her spine. When she came out of that, she went straight into a room to start a 48-hour infusion chemo, which administers the drugs to her through a Hickman line. She’ll be having nine rounds altogether and has had two so far. How long it takes depends on how well she tolerates it. Ideally, they would like to do it every two weeks but we need to see how poorly she gets. 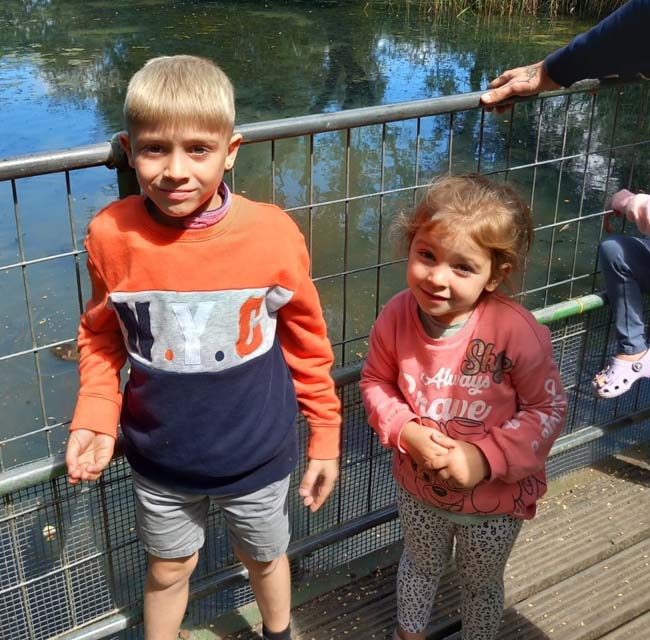 On 7 October, we visited the Royal Marsden for a regular kidney function test and an MRI for radiotherapy planning and were blue-lighted back to King’s College because once again Anastasia had too much fluid on her brain. We had no idea she was so sick as she wasn't showing any symptoms. She had another surgery three days later to place a ventriculoperitoneal (VP) shunt, which allows the excess fluid to drain straight into her gut, and a week later she started four weeks of radiotherapy. That’s due to finish around the 26 November, which is two days before Oscar’s birthday, and for the final two weeks she will receive a ‘boosted’ form of radiation, which will directly target the cancer cells in her body. 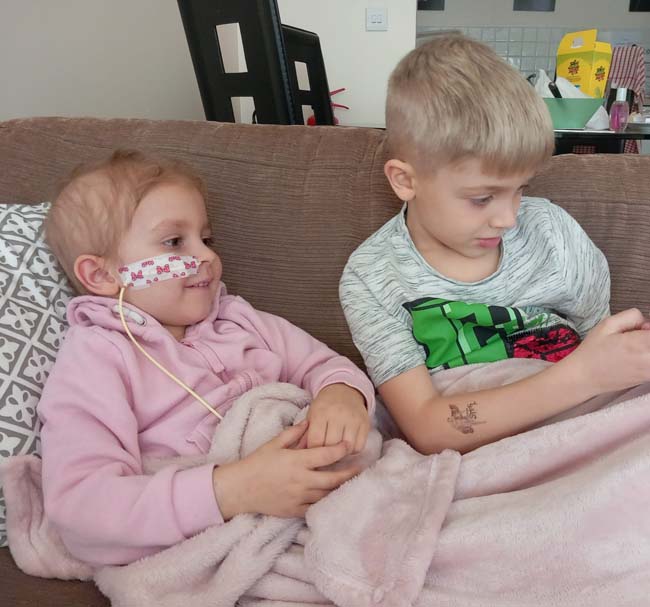 She has recovered well apart from slowly losing her appetite, but I'm not sure if that is due to the surgery she had or just side-effects from her chemo and radiotherapy. I’m told it’s likely to be a combination of all three. I know the radiation can burn the inside of the throat, which makes eating uncomfortable, and I can already see that Anastasia’s tongue is a bit white and sore, which can’t be helping. She's been on daily nasogastric (NG) tube feeds for the past week. She’s still snacking but they’re giving her extra feeds and she’s gradually getting her strength back. She's even been asking to walk again.

“I’m so incredibly proud of her and how amazing she's doing; she’s just so strong.” 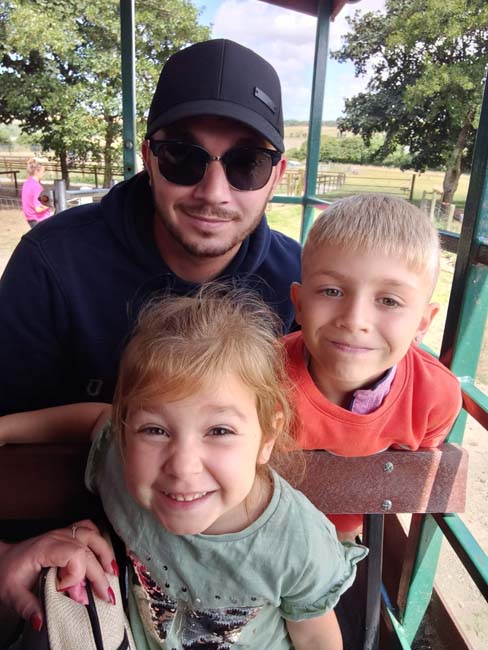 I feel lucky that they were able to operate and remove most of her tumour. I shouldn’t because my daughter’s got cancer, and it’s rare and aggressive, but I do because they’ve given her a better chance of survival. If she carries on tolerating all of the treatment, my hope is that she will be fine. I alternate between trying to make the most of every second with her because we don’t know what’s going to happen, which is heart-breaking, to thinking she’s going to pull through and allowing myself to think about the family holiday we have booked next year, but I don’t like to plan too far ahead because it’s just too hard.

I didn’t know anything about brain tumours, or how common they are, before Anastasia was diagnosed with one and I'd certainly never heard of ATRT. I’d like more parents to be aware of it and what to look out for, which is why it’s so important for me to be able to share our story. Maybe if I’d known about the symptoms of ATRT, I would have been more concerned when Anastasia began tilting her head and losing her balance.

“I also never knew that eye tests could detect more than poor vision and would encourage all parents to take their children for regular check-ups.” 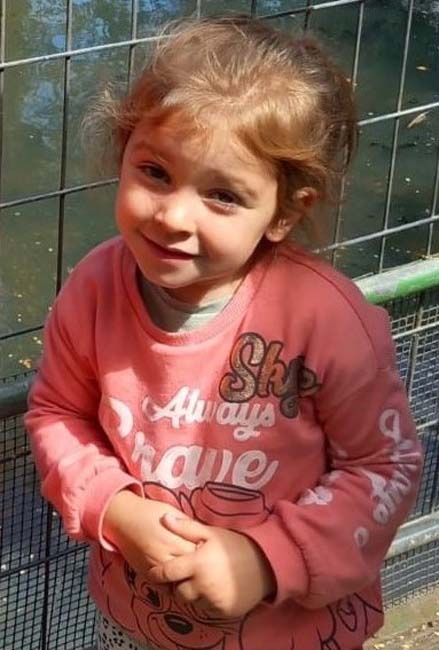