Sales Manager Amy Drummond was just 13 years old when she began to experience small seizures and memory loss while studying for her GCSEs. After visiting numerous doctors in a bid to find out what was wrong with her, she was finally diagnosed with a rare type of brain tumour. Fortunately, Amy was able to have the tumour removed by surgery, but the tumour took its toll on her being able to enjoy teenage life too. Now, as she heads towards the milestone of turning 30, Amy is determind to not let her past affect her future.

“I have always been open with people about what I went through as a teenager and how it changed me as a person. Looking back, I missed out on school, socialising, dating, playing sport and even making friends. I would even say my brain tumour robbed me of my teenage years.”

I was 13 years old at the time and just starting year nine when I started to experience moments where I zoned out and completely lost concentration. These episodes became a regular occurrence, lasting just a few seconds but happening several times a day. When I told my parents what was happening they became concerned as these weren’t just lapses in concentration, these were seizures

Over the coming months the seizures became more frequent and were lasting longer. They also became more noticeable to my family and those around me at school. I would try to answer a question and I would come out with gobbledygook so the other kids would laugh and poke fun at me. Kids can be so cruel.

My mum was great and tried to offer words of encouragement that it would all be OK. I’m the oldest of four children and my mum and dad have always done their best in taking care of us. At the time the episodes started my dad was away working, so she had taken me to the doctors and they had passed off the symptoms as me “going through puberty” and that it would rectify itself. But it didn’t get better, it got worse. On the 19th December 2001 I experienced a full-on seizure while in class at school and was immediately rushed to hospital with suspected epilepsy. I was admitted to the children’s ward and given medication to control the attacks.

A CT scan revealed nothing and the consultant felt I didn’t need to be prioritised for an MRI scan. The doctor even told my mum that he thought I might just be an “attention seeking teenager”. As my younger sister was only a baby at the time, he thought my symptoms may be brought on by me “acting out”, which infuriated me. My mum and dad were also annoyed by the doctors as they knew something wasn’t right with me. They 100% believed that I wasn’t well and demanded an appointment to see a neurologist.

I was eventually referred to Addenbrookes Hospital in Cambridge to see a consultant in May 2001, who also believed there was nothing wrong with me. We asked for a second option and we got lucky. The next consultant methodically looked through all my notes and listened to me talk through everything that had happened. He believed me that something didn’t add up and that an MRI scan would be a good idea and I was pushed to the top of the list.

Mum was in floods of tears when I came into the room to hear my results. It was then that I learned I had a brain tumour, about the size of a 50 pence piece, and would need to be referred to Great Ormond Street Hospital for further tests. I remember being shocked, but pleased that they knew what was wrong with me and I wasn’t making it up.

The doctors categorised the tumour as a grade one dysembryoplastic neuroepithelial (DNET), a rare type of tumour thats number one symptom is seizures. Over the next six months the doctors carried out lots of tests trying to figure out what would be the best course of action. The thing I loved about Great Ormand Street Hospital was that they talk to the child first and the parent second.  You don’t feel that you are invisible and that you can’t be spoken to.

Doctors finally chose to operate in December, and after a five-hour operation they were able to remove 80% of the tumour. I stayed in the high dependency ward for about a week before being moved to the children’s ward and mum and dad took it in turns to be with me.

My recovery was slow, but within six months I was back at school. However, I was on a reduced time table as my short-term memory wasn’t what it used to be and I needed extra help to get me through my GCSEs. Years 10 and 11 were tough and I chose to move schools when it came to going into sixth form. I think I just wanted a fresh start and shed the image that the other children had of me.

In January 2005 a routine check-up revealed the tiny piece of tumour, that had been left behind after surgery, had begun to regrow. As I was 17 at the time I was classed as an adult, so it was my decision when I would have surgery. I chose to sit my exams and then go in for surgery in early February, which went well and I recovered from it a lot quicker and was able to go back to finish my studies.

I have always been open with people about what I went through as a teenager and how it changed me as a person. Looking back, I missed out on school, socialising, dating, playing sport and even making friends. I would even say my brain tumour robbed me of my teenage years.

If I was to meet a teenager who has recently been diagnosed and is trying to deal with all the other things being a teenager brings, I would advise them to try and stay positive and talk through how you are feeling with your parents or close friends or even with the support groups provided at the hospital. I found worrying about the small things that I couldn’t control was really draining both emotionally and physically.

I spent a long time thinking about all the things I wasn’t able to do and am now in a good place. After my A’levels I went on to study Human Biology at the University of Birmingham and then entered full time work, so I didn’t let the tumour from stopping me doing what I wanted in life. I’m currently studying for a masters in Business Administration (MBA) at University of Sheffield and living with my boyfriend Danny, who I have been with for over five years. I’m back playing hockey and have also set myself a goal of running the London Marathon in 2018 for charity Brain Tumour Research. I am lucky that I can go back to having a normal life though sadly so many people diagnosed with brain tumours aren’t as lucky. 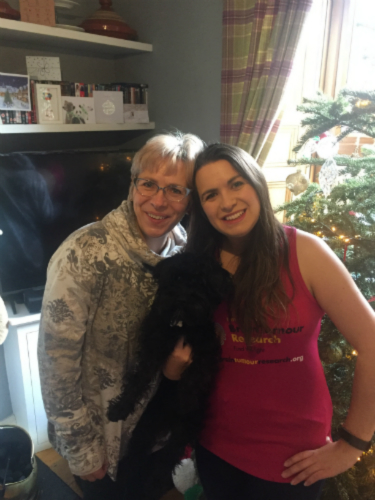