Talented artist Amanda Day had always been top of the class and was hardworking at school, but when her health began to deteriorate, she started to fall behind. After struggling for months to get to the root of her symptoms, Amanda was diagnosed with a small pilocytic astrocytoma in her brainstem. Now, she is left with irreversible and long-term effects of the radiation treatment she had four years ago. She is coming to terms with the fact she may never achieve her aspirations of going to university, owning a home and having a child.

“It frustrates me that most of my symptoms are due to the radiotherapy treatment I had four years ago, as opposed to the tumour itself. The treatment has left me with long-term symptoms, such as short-term memory loss and confusion, which will get worse over time. It has had a devastating impact on my education and daily life is a big struggle.”

I live with a terminal brain tumour and the doctors have told me that they are ‘prolonging the inevitable’, as people with tumours like mine rarely survive longer than two years. For now, my tumour is slow-growing and stable but I’m faced with the worry that it may also spread in my brain and down my spine. The majority of my symptoms are due to the long-term side effects from the treatment I had to save my life. My cognitive ability and physical health will deteriorate over time, so I’ve had to give up my dream of going to university and I don’t know whether I’ll ever be able to have children or own a home. It is hardly the quintessential and care-free life of a 21-year-old.

My brain tumour journey began in 2013, when I was in year 10. Having always been top of the class, I suddenly found myself struggling at school. I was seeing double, found it difficult to sit on my chair and had problems staying focused. I was failing to keep up with my friends both mentally and physically and, as we walked to school, I had to ask them to slow down due to excruciating pains in my legs.

I remember how my friends got frustrated at my symptoms and this wasn’t helped by the fact it took me months to get to a diagnosis. I described my symptoms of double-vision, breathing difficulties and leg pain to my doctors but I felt as if they weren’t taking me seriously and thought I was being a drama queen. They said there was no connection between my symptoms and put my headaches down to hemiplegic migraines. This was incredibly hard for me to hear as, having grown up with my sister, Rebecca, who suffers from a number of disabilities, I knew I wasn’t the troublesome child who liked to make a fuss. I instinctively felt like there was something seriously wrong with me.

As I deteriorated further, I felt extremely isolated was very lonely. It was as if nobody could understand me. I was getting more and more tired and by the first week of year 11 I had collapsed at school. By this point, Mum insisted that I had an immediate MRI scan. Before I was born, my parents had lost a baby to hydrocephalus – a build-up of fluid in the brain – and my symptoms took her back to that dark time. She was convinced I was also suffering from the disease.

On Christmas Day in 2013, I received the most shocking, yet somehow relieving, news of my life. Mum told me that the scan revealed I had a brain tumour, known as a pilocytic astrocytoma, which was pressing on nerves which controlled my vision and breathing. Immediately, my symptoms began to make sense. I cried with relief as I thought I could finally be treated and get my life back on track.

I had brain surgery the day before New Year’s Eve and then started six weeks of radiotherapy at the Royal Marsden Hospital a month later. Despite my diagnosis, I was determined to work hard and strove to achieve and, after taking time off school, I decided to retake year 11 and started again in September 2014. Though it was really hard to see my friends a step ahead of me, my teachers were really supportive. I was able to pass my GCSEs and went on to achieve two A-Levels in Art and Design, while enduring regular follow-up scans and hospital appointments.

Afterwards, I studied graphic design at North Kent College in Dartford. Starting this course was like a blank canvas and gave me the fresh start I needed. I met lots of new people and didn’t tell them about my tumour at first, so they got to know me for who I was. I didn’t have to be labelled as a cancer patient and I felt like I could just be myself.

Although this was the new beginning I needed, my symptoms soon began to take a toll and I struggled with the workload. At first, I didn’t want to admit that I was falling behind, so I tried to work as hard as I could. I travelled on the train to Dartford and would spend the entire journey studying. I worked late into the night, while my course mates would have finished their coursework by lunchtime. Eventually, things got on top of me and I had to tell my tutors, who allowed me an extra six weeks to complete my course.

As more people became aware of what I was going through things got easier and I realised that it wasn’t like school and I wouldn’t be judged for my illness. I also joined a support group ‘find your sense of tumour’, where I made some great friendships. I met a boy who had the same scars, shunt and tumour as me and there were shared a lot of similarities.

Nevertheless, it was devastating to see the impact my illness had on my education. It is frustrating that the majority of my symptoms are due to the radiotherapy treatment I had four years ago, as opposed to the tumour itself. The treatment has left me with long-term symptoms, such as short-term memory loss and confusion which will get worse over time. It has affected my hormones to the extent that I have been told it will be difficult for me to carry children and I’m guaranteed to develop type 1 diabetes.

Daily life is a big struggle for me. I have to inject growth hormone to renew my cells, as an attempt to control the damage that the radiation has done to my thyroid. I also take propranolol every day for my headaches, which is like living with a constant migraine. I get fatigued easily, so if I go on day trips and evenings out, I’m extremely worn out for the next few days. I also have permanent entry and exit burns from the radiation, which has affected my oesophagus, so I have to take tablets to help lubricate my throat to swallow food.

My brain surgery also had a toll on my body. After developing an infection during an operation, I became unable to drain the fluid in my brain. I now have a VP shunt permanently fitted which drains the excess fluid and a constant feeling of pressure in my head.

I have regular scans at The Royal Marsden and the worst part is having a contrast dye injected into my bloodstream, as my veins are collapsing and none-existent due to the constant cannulas and needles that I have had over the years. I feel more for the nurses than for me; once it took seven different medical professionals to find a vein. I have scars on my hands and elbows which paints my past of hospital appointments and routine tests.

I have always used art as an outlet and it has given me time to reflect and be by myself. I remember sitting in hospital, when a nurse asked me for a picture. I was frustrated that the only image they knew of me was as a cancer patient, with a bald head, so I drew a picture of what I hoped I’d look like after my six-week stint in hospital was up.

Art has also given me a great sense of purpose for employment as, recently, because of my worsening symptoms, I had to give up my job as a support worker for adults with disabilities. It was awful to have to leave a job that I loved, but I’m hopeful that in future I can earn a living through my artwork.

My illness will not only affect my career, but will rob me of many other aspirations and goals. I’m not sure I’ll ever be able to drive – my application is currently under consideration by the DVLA – and if I’m allowed I know the insurance will be extortionate. I haven’t been abroad since my diagnosis, as I’m terrified of what could happen on holiday or what effect the plane journey will have on my symptoms.

I wanted to go to university to study fine art but, as my cognitive ability has inevitably declined, and will continue to worsen, this dream has been shattered. This is heart-breaking; I was so determined and worked so hard to complete my A-Levels and graphic design course and it never occurred to me that I might not be well enough to finish my studies.

My tumour and the effects of my treatment has also had a devastating impact on everyone around me. My boyfriend Liam and I dream of moving out and owning a home but, if we save for a deposit, I don’t know how long it will be before I deteriorate and am not able to earn a living to afford the mortgage. I know that Liam would make a fantastic dad and my dad is so desperate to have a grandchild but, having been told that I can’t have a baby without IVF or hormone treatment, I’m not sure how realistic this will be. I remember crying all the way home from a hospital appointment, when I realised how hard it would be for me to fulfil my dreams. Sadly, it’s something I have had to come to terms with.

When I compare myself to other 21-year-olds, I’m proud of everything I’ve gone through and I feel like I’ve matured very quickly. Though life may not be easy, I’m looking forward to spending time with my family at Center Parcs and going in a hot air balloon with Liam. I know that it would be no use waking up every morning feeling depressed, so I try to live in the moment as much as I possibly can. 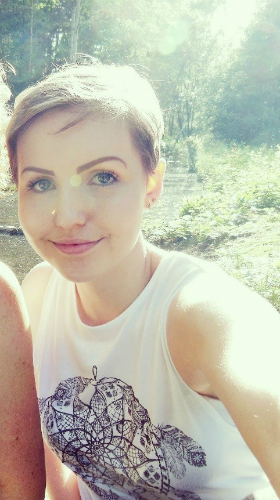