When Alison, from Seaton in Devon, first heard voices and buzzing she thought this could be a sign of epilepsy or hormone related. But, as the episodes became more frequent she was referred to Royal Devon and Exeter Hospital where an MRI scan showed a mass on her brain. Alison was diagnosed with an astrocytoma and has since had three operations and undergone gruelling radiotherapy and chemotherapy treatment. She shares her experience of living and working with a brain tumour and hopes to encourage others who have been diagnosed, demonstrating that, for some patients, it is possible to lead a fulfilling life after diagnosis.

Whilst sat using my computer I started to hear voices but no-one was around. It sounded similar to a buzzing noise with words, but I couldn’t tell what they were. It happened quickly and felt a bit like deja vu.

These became more frequent and, with each episode, my mind went completely blank.

At the time I was, and still am, working in a school as a counsellor and it would happen during sessions with clients and around colleagues. Although I couldn’t talk, only make a grunting sound, or respond to people with a nod or shake of my head, no-one noticed. As soon as they stopped I carried on, ignoring it as if nothing had happened.

I was terrified of having my driving license taken away from me as I depend on the freedom that driving gives me. I opened up to my friend about what I had been experiencing and they told me they had something similar happen to them and they were diagnosed with epilepsy. I decided I needed answers.

“I went back and forth to the GP and each time was told something different, varying from being an issue with my hearing, hormone related, or something neurological.”

As my seizures got worse, something was telling me I could have a brain tumour and I requested to see a specific doctor at my local surgery - one who I knew had their own story of living with a brain tumour.

Trusting my instincts led to a referral to Royal Devon and Exeter Hospital where an MRI scan in July 2016 found a growth on my brain. I was beside myself with fear and didn’t want to see the scan. I was thinking about my daughter who had seen her dad diagnosed with and fight throat cancer. I was going to have to tell her that her mother now had a brain tumour. My whole world went blank.

I was diagnosed with an astrocytoma and agreed to an operation in December. Due to where it was growing on my brain, part of my gum needed to be cut to give them access to the tumour which I wasn’t expecting. When I came round after surgery everything felt sore. It was hard to open and close my mouth and hurt to eat and talk. The surgeon said they had removed part of the mass, and any further surgery could cause life-changing injuries. 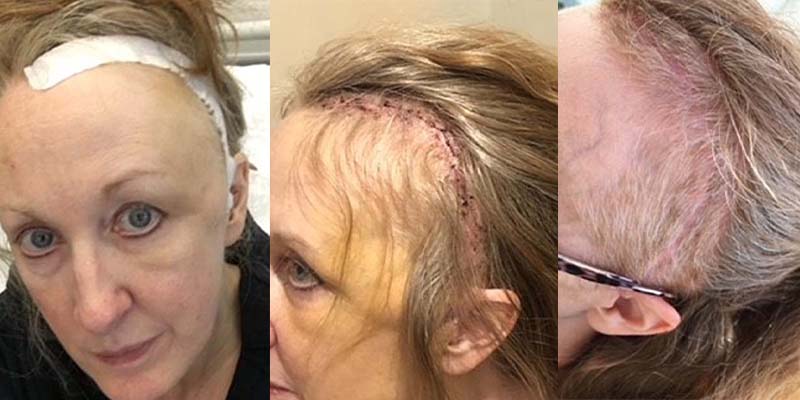 At this point, I was told I wouldn’t need radiotherapy or chemotherapy as the tumour was low grade.

My seizures stopped for about a week and then I had five in the space of seven days, eventually having more and more as time when on. Sadly the medication I was taking didn’t help.

I was under the care of an epilepsy nurse who was seeking more information from a specialist in Bristol and whilst I was waiting for an answer as to how my seizures could be controlled, I had an EEG. Over a 48 hour period my brain activity was monitored, searching for a reason as to why I was suffering from the seizures and how they were forming.

I had endless video consultations where I was told I could have a device fitted in my chest to help soothe when a seizure would happen. They made a 3D image of my head and saw my hippocampus had grown and that growth had caused my seizures to become more frequent, something an MRI couldn’t pick up. I couldn’t help but think if I had this type of imaging earlier, could I have been diagnosed sooner?

Despite initial fears that any further operations could impact my quality of life, I had a second operation on 2 February 2021. The craniotomy lasted 10 hours and thanks to the 3D scan, surgeons could safely remove more of the tumour.

However, this time a biopsy revealed the tumour had progressed to a grade 3 and I was recommended an awake craniotomy.

Two months later I had a third operation and elected to go ahead although I was warned I could lose my speech as a result. I agreed for them to continue to remove more of the tumour even with this possibility. After surgery, I spent a day in intensive care, unable to speak. I was trying to say words, but nothing would come out and I would weep. Even my text messages didn’t make sense and came out as a bunch of random words. It took a week for these skills to return.

I had six weeks of radiotherapy followed by ten months of chemotherapy, which I am due to break from this month. I’ll have a follow up scan in September to check how effective the treatment has been since the last operation.

I suffer with word finding difficulties and find myself tiring easily, however I am still working as a counsellor.

Although I sometimes struggle to find the right words, I find that having a job where I have to speak on a daily basis, has acted almost like a form of rehab. Being open with clients and colleagues has helped me accept my diagnosis and I feel confident in my ability to continue to support people in this way.

My hope is that by sharing my story of living with a brain tumour, I can demonstrate that life doesn’t stop when you are given news as devastating as a mass growing on your brain. You are capable of anything that you put your mind to. 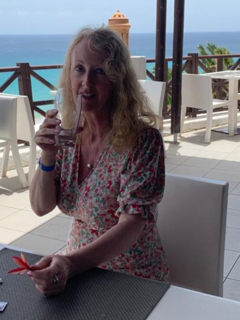