Alexandra Dixon was diagnosed with a low-grade oligodendroglioma brain tumour after suffering a series of severe epileptic seizures while on holiday in the south of France. Back in the UK, she underwent surgery in June 2007. An MRI scan in 2012 revealed the tumour had returned. She had surgery again followed by radio and chemotherapy.
I was 33 and working as executive assistant to the principal partner at St James’s Place Wealth Management in London. I was on holiday in Cap Ferrat in the south of France when I suddenly experienced a series of grand mal epileptic seizures. I had five in a row, throwing myself out of bed and smashing my head on a metal piece of furniture and then the marble floor. We called out a doctor who thought I was hysterical but he was told that this reaction was absolutely not in my nature. He realised the situation was serious and that I was beginning to have another seizure. I was taken to hospital by ambulance and had a CT scan immediately. So it was in hospital while I was on holiday in France that I was told I had a very large brain tumour.

My mother flew out to be with me and, although it was suggested that I should undergo surgery there, we researched the best options and we came back to the UK. My head was badly bruised and swollen after the seizures, I had a black eye and was in pain and exhausted. My memory of the incident was severely impacted. Back in London, we met  Kevin O’Neill at the Cromwell Hospital in Kensington and Chelsea. He was very realistic  about what we could expect. My tumour was in the front left of my brain. It was the size of a tangerine and I was told it had probably been growing for around 15 to 20 years. I underwent surgery the following week. We were warned that it was a dangerous procedure, that I could die or be left with a speech deficiency or other long-term problems.

The operation, in June 2007, was a craniotomy procedure which took place while I was awake. You are anaesthetised while your head is opened up and then brought round enough so you can make some movements and speak. They need to do this so they can gauge how much of the tumour can be removed without causing damage. My surgery was the first time a Sonowand - a neuro-navigational tool which allows better resection in surgery, improving patient survival and quality of life - had been used in London. A biopsy revealed the tumour was a low-grade oligodendroglioma and no further treatment was required. It had been removed and it was really good news. The weekend I left hospital we dressed up and drank Champagne at Henley with Kevin and his girlfriend. I had my surgeon with me so I felt confident I would be fine! However, there was a cautious note as I had been warned that this type of tumour does tend to regrow but I was hopeful I would be one of the lucky ones. I had regular MRI scans and things seemed fine.

It was at this time that I got involved with the charity Brain Tumour Research Campaign,  founded by Wendy Fulcher after the loss of her husband John. Kevin introduced me to  Wendy and I became a trustee, helping to raise awareness and money. I had regular MRI scans and, in February 2012, five years after my operation, we discovered the tumour was back. This time, I had not experienced any symptoms so there were no warning signs. I had lost my father to a rare neuroendocrine cancer before I was originally diagnosed. I was very shocked to learn the tumour was back but, at the same time, I was philosophical, feeling that something could be done to help me whereas it had been too late for my father.

I underwent a second awake craniotomy with my boyfriend Edward Heaton at my side. It is reassuring to have someone you know with you although I suspect quite a difficult thing to have to observe. Edward had spoken to my ex-husband who was with me the first time so at least he was prepared for what was to come. The procedure took place on 24th November 2014 and the tumour was smaller as it had not been growing for as long. Kevin operated on me again, this time at Charing Cross Hospital. Things went well but the biopsy revealed it had changed to grade three. I underwent six-and-a-half weeks of radio- and chemotherapy going into hospital every day, Monday to Friday, with a mask fitted to my head. I slept a lot as I felt very tired and I lost a lot of my hair. I was prepared that this would happen so it was expected. It is upsetting but part of the process and I always wear a hat when I go out.

After a month off, the treatment plan is for 12 cycles of chemotherapy which will take place over the next year. I am hoping that this will get rid of the tumour forever. I don’t have any children and, at the age of 41, it is quite upsetting to think that this might be something I no longer have any choice over. Your mortality is something you don’t necessarily want to have to think about, particularly at my age. Having been involved with the charity, I hear from mothers who have lost their babies because they didn’t realise something was wrong and it was too late. However we know about my tumour so it can be monitored. This is extremely positive and I am looking forward to a long and active life ahead. 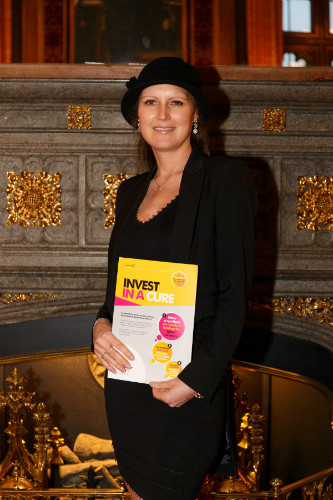