Seven-year-old Alexander’s brain tumour diagnosis and subsequent surgery and treatment were impacted by the COVID-19 pandemic. His devastated family now fear they have no other option than to crowdfund to help pay for a drugs trial and pioneering immunotherapy treatment in Germany which they believe is the only chance to save their beloved son’s life.

Alexander had always been an active and healthy child who loved his sports. When he first had a seizure in the middle of the night it came completely out of the blue. It was September 2020, and we were in the middle of packing to move home. By the time an ambulance arrived, he was in a full tonic-clonic seizure which was awful to see. We were taken to the Queen Elizabeth Hospital where the incident was suspected to be a one-off. We were referred to a paediatrician who organised follow-up appointments for an MRI scan and an EEG to check things out. 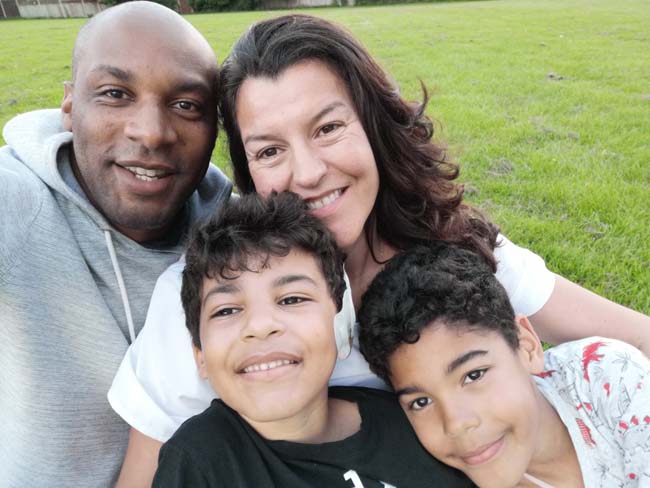 Unfortunately, things didn’t really get moving until mid-November when his MRI took place. A few weeks passed and I hadn’t heard anything from the hospital, the COVID situation was ramping up for the NHS and I thought that no news must be good news. How wrong could I have been? On 14 December, 10 days after his seventh birthday and looking forward to Christmas, Alexander had another seizure. This time we took him to A&E at the Princess Royal University Hospital.

“This set off a horrifying chain of events which began when the doctor broke the news to Alexander and me – with no preparation whatsoever – that he had a brain tumour.”

The doctor said the results were sitting in the system lost and unflagged as having a tumour present which is why no one had contacted me sooner.

Looking back now, I realise there had been subtle changes that probably only a mother would see. I had noticed a slight change in the colour of his eyes. His irises had become a lighter shade of brown. I knew something wasn't right but did not know what. The possibility of a brain tumour was not mentioned to me, at the time I thought they were only testing for epilepsy.

We met with the neurosurgeons four days before Christmas, all I wanted to hear were the words it was in a place they could reach and remove it and, thankfully, it was. I was so relieved but that was immediately dashed when they said Alexander was being placed on a "wait and see" with a rescan and review in six months. The scan indicated a slow-growing benign or low-grade tumour and they thought it best to monitor it.

“I just knew it would be a huge mistake to wait for six months. I was adamant that something needed to be done as soon as possible and I asked again and again for surgery.”

But we were told that with COVID cases so high, Alexander was much safer at home – albeit with a newly-diagnosed brain tumour – than in hospital where the virus was rampant.

As the days passed, I noticed his eyes continuing to change colour ever so slightly and his personal baby smell that I know so well started to change.  Subtle changes that only maybe a mother could notice but they set alarm bells off for me. I just knew cancer was coming.  We tried other hospitals but, again, we were told ‘not now’. In January the number of cases of COVID were out of control and there was immense pressure on hospitals and ICUs in particular. With so many ICU beds deployed for COVID patients there would be no bed for Alexander post-surgery.

By the middle of the month, Alexander was experiencing horrific clusters of four or five seizures. There was a glimmer of hope when the surgeon offered us a rescan but we would have to hold on until February for that. Looking back now I wish I had taken him into A&E as that way he would probably have been scanned much quicker but even when I called the ambulance service for advice after a seizure the telephone operator was unsure of the best place for him to recover due to the high number of COVID cases in the hospitals. It was decided he should stay at home and for me to call back if I needed. 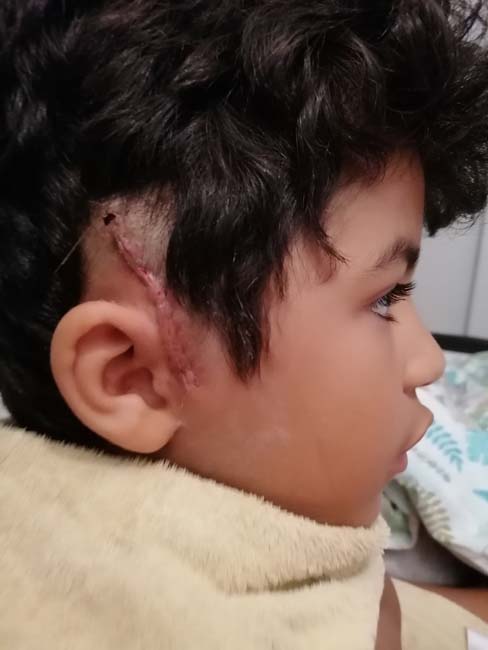 When the MRI eventually went ahead in February, it revealed that the tumour had grown. He finally had surgery on 18 March to resect the tumour but by then it had spread into his spine. Within weeks of his brain surgery, Alexander was having seizures again and, in June he endured a second operation on his brain, and spinal surgery in the space of just two weeks. It was an incredible amount for his little body to go through in such a short space of time. 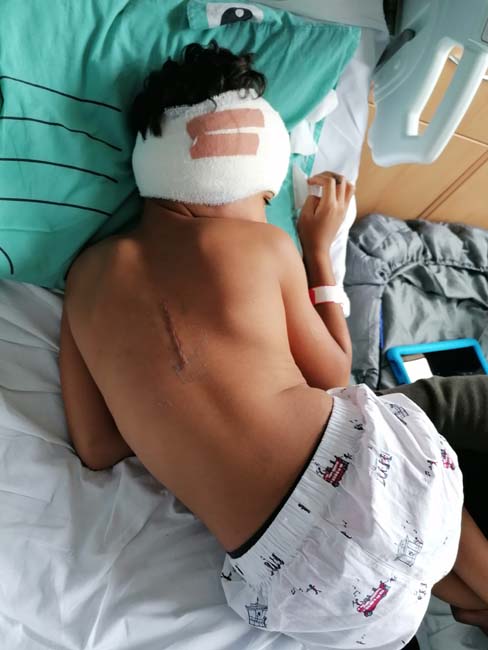 In March Alexander’s tumour was identified as a grade 2 (low-grade) pleomorphic xanthoastrocytoma. We were told it was very rare and it was the first case of this type of tumour they had seen in 10 years. There was concern it was not behaving as a low-grade tumour would do, the spread to the spine and the quick recurrence indicated it had mutated. His tumour type is rare and it is even rarer for it to turn from low-grade to high-grade but tumour samples from his second surgery in June confirmed it had done just that.  It was now a confirmed grade 3 malignant anaplastic pleomorphic xanthoastrocytoma.

“By this time all my worst fears had been confirmed. To any parent who find themselves in a similar situation, I would say: trust your instincts. You know your child better than anyone, no matter what their qualifications may be.”

If things don’t seem right and you aren’t happy with what you are being told then persist and keep going until you are heard.

We hold no-one to blame but, had it not been for COVID, we can’t help but think things would have been very different. The pandemic made the decisions about the best care for Alexander harder for everyone. We are now in a very difficult place. Alexander has had six weeks of cranio-spinal radiotherapy at the Royal Marsden in Sutton which was incredibly hard and made him very unwell. Proton beam therapy would have been the preferred option over standard radiotherapy as it is much more targeted and wouldn’t have put him at increased risk of other cancers of his major organs along his spine in the future as, sadly, the conventional radiotherapy has. Sadly, we were told that as Alexander now has metastatic cancer our application for it was denied. I do feel this decision was also due to there being a huge lack of capacity as the new proton beam centre in London that was due to open this year was delayed by COVID and many children are being sent abroad by the NHS to try to keep up with demand. Unfortunately, there was no time for that for Xander as treatment was needed so urgently to stop the tumour growing back again. 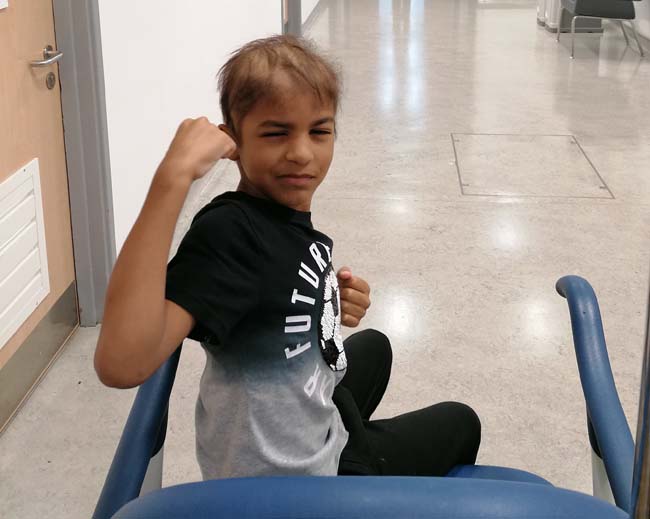 Our only hope now, we believe, is to seek treatment abroad and pay for it ourselves. I think the only avenue left in the UK would be to pay for the inhibitor drug dabrafenib as part of a phase III trial. It is proving very effective for children against the specific gene mutation which Alexander has. We are looking at a cost of more than £64,000 to do this. I have given up my job as a PA to care for Alexander so we are completely reliant on Jermaine's train driver salary. The cost of the pioneering immunotherapy treatments in Germany is eye-watering even before we factor in how much it will cost us to travel there each month for up to two years. These are huge sums for us and we have no other option but to ask for the help and kindness of family, friends and strangers who we hope will support our crowdfunding.

The impact of Alexander’s diagnosis has been immense and I fear life for us, and his brother, who is nine, will never be the same. 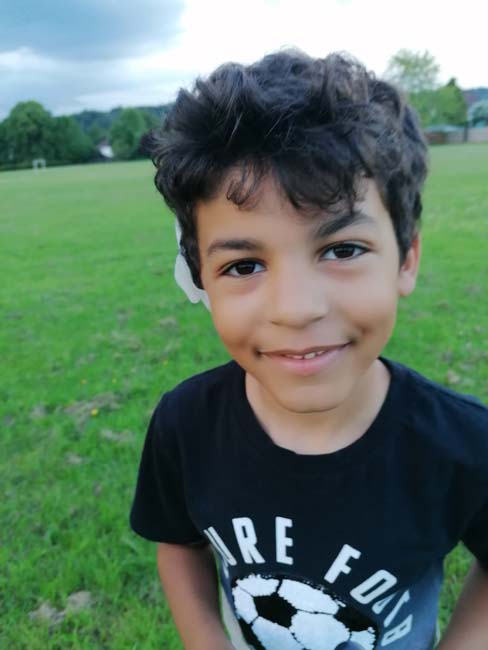