Alex Mussard thought the ongoing hearing loss he was experiencing in his right ear was probably caused by listening to music too loudly through his headphones. Three years after his symptoms first appeared and following several misdiagnoses, the 27-year-old was finally diagnosed with an acoustic neuroma brain tumour. Describing himself in his Twitter bio as an ‘acoustic neuroma warrior’, Alex is now seven months post-surgery, back to his full-time job in finance and counting his blessings after his life-changing experience.

I first noticed some hearing loss in my right ear in 2016. I was convinced it was nothing serious and thought it was either down to playing my music too loudly or even caused by accidentally getting hit in the head as a kid. I went to my drop-in surgery in Beckenham, south London. The doctor thought it might be a blocked eustachian tube, caused by a sinus infection, and I was prescribed a decongestant nasal spray. Six months later, I was still suffering with hearing loss, so I went back to my GP and was diagnosed with the same problem and given more nasal spray. Another six months passed and I was showing no signs of improvement and so I went back to the surgery for the third time and I was prescribed steroids.

“The steroids didn’t work either and so, eventually, in February 2019, I was sent for an MRI scan. By this point a hearing test had revealed that I was suffering from 80-90% hearing loss in my right ear. It was scary not knowing what was causing it.”

The MRI scan took place at Croydon University Hospital. They couldn’t diagnose anything straight away but when they injected me with dye, I knew something wasn’t right. The results came through three weeks later on 20 March 2019. Having been given no indication that I may have a brain tumour, I was unexpectedly diagnosed with an acoustic neuroma. It came as a huge shock. I was at the hospital on my own when I collected the results. I was presuming they were going to say it was a nasal infection. Instead, I was told they had found a 3.4cm tumour, that had probably been in my brain for 11 years or so.

Treatment-wise, the size of my tumour meant that I was just over the threshold to receive radiotherapy. My only option was to have the tumour removed. It was impacting on my brain stem and beginning to cause some facial numbness and slight drooping on the right side of my mouth. I had also started experiencing some balance issues.

“It was a relief to finally get some clarification and answers to the questions I’d been posing for the past few years. However, it also felt like the ‘worst case scenario’ and I was pretty devastated.”

In preparation for surgery, I focussed on my wellbeing and tried to stay as healthy as possible. I kept my fitness up by going to the gym and tried to eat the right things. It also provided a welcome distraction. My operation took place at St George’s Hospital in London on 18 June, just three months after I received my diagnosis. They didn’t hang around, due to the location of the tumour and its size. I felt really nervous going in but all the meetings I had with my consultant, my ear, nose and throat (ENT) specialist and skull base nurses put me at ease. Their attitude was that it was treatable and they were going to deal with it. I felt very reassured. 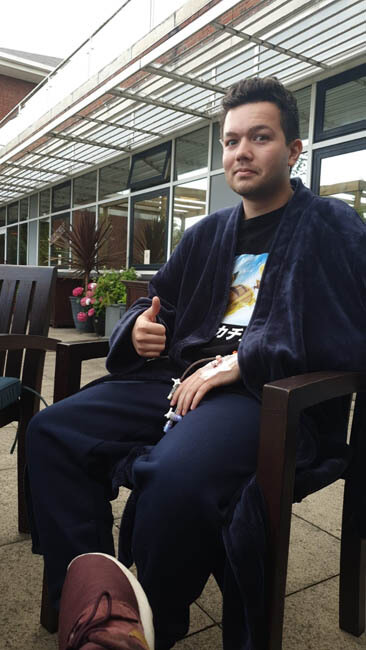 My whole family came to hospital with me on the day of the surgery. My main worry, having looked into all the possible after effects, was that I would suffer facial palsy. The procedure took 13.5 hours and afterwards I was taken to the intensive care unit (ICU). I woke up feeling delirious and really sick. I threw up; it was really unpleasant. I saw the team approach my bed to talk to me but I wasn’t in a fit state to hold a conversation. I went back to sleep and didn’t wake up until the next day.

“I was soon getting up and about and, amazingly, only spent a total of three days in hospital. My team said it was the best recovery they had ever seen from this type of surgery.”

I was pleased to be discharged and lucky to have my partner at home with me for two weeks and then my mum came to stay after that. In the first few weeks of recovery I had to have someone with me at all times. My sickness gradually went away but my balance wasn’t great and I was on a lot of painkillers. I was religious about doing my post-surgery physiotherapy. It was difficult but having been through the worst, I had to remain positive. After a couple more weeks I was getting out again, meeting friends in the pub and going for walks. In September I went back to work part-time. I work in the city as an operations manager for independent research company Third Bridge. It’s a demanding role but I am fortunate to have really supportive employers, who have been very flexible and allowed me to ease back into my job. I am now back at work full-time and am able to work from home sometimes. 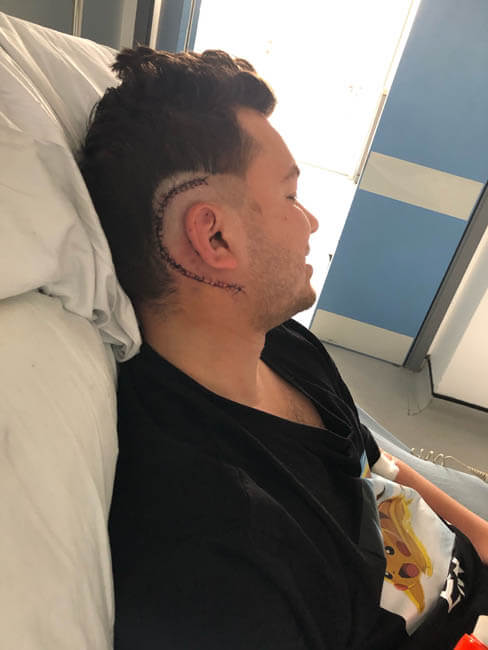 “I am also extremely grateful for the care I received under the NHS. Staying in hospital was frightening but I always felt in safe hands. I feel privileged to have been able to access the treatment I had.”

The hospital also put me in touch with another acoustic neuroma patient, Francesca, who was operated on under the same team a year or so before I had my treatment. It was so helpful to connect with another brain tumour survivor and to be able to ask her for advice. What I learned is that everyone’s recovery is different and you shouldn’t compare yourself to someone else. I have also attended support groups, which are far preferable to googling advice online. A lot of what I read on the internet was very intimidating. What I did take away from my internet research, however, were the shocking statistics around brain tumours. I was staggered to discover that brain tumours kill more adults and children under the age of 40 than any other cancer… yet just 1% of the national spend on cancer research is allocated to this devastating disease.

“My family and friends have been fantastic. It has been really touching. I really wasn’t expecting that much love and support and for that I am truly grateful.”

After being signed off by a doctor as ‘fit to fly’, I enjoyed a lovely, relaxing holiday to Florida in August and I am planning a visit to the Seychelles this year (the country where my mum and my paternal grandmother were born). What I have been through has been traumatic and I still have to go for regular MRI scans, but I am thankful that my tumour was low-grade and treatable. I guess I am one of the lucky ones. 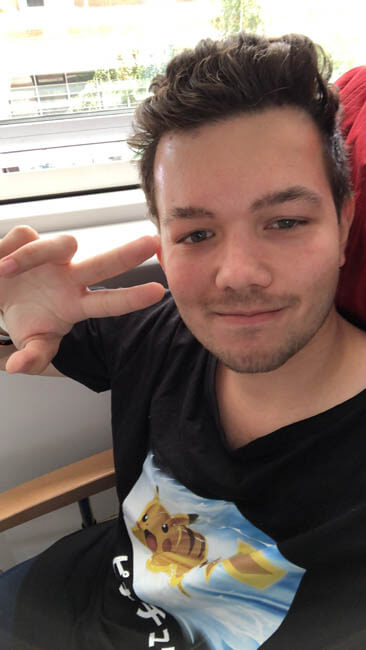