Up until his brain tumour diagnosis, Alan Purvis, 50, held senior director positions in a number of large and medium-sized businesses.  The successful businessman was also a keen cyclist, runner and mountain climber. The father-of-two from County Durham is still passionate about his hobbies and his profession but since receiving treatment for his tumour, he’s had to adapt his lifestyle and re-evaluate his career choices.

I had started to become increasingly lethargic, which I put down to the travelling I was doing with my job and the stresses of the senior roles I held. I was also suffering from tinnitus. I took a six-month break from work, and travelled to Cambodia, where I was living in the jungle and working at an elephant rescue centre. I noticed that in spite of taking time out from my busy work life, the symptoms weren’t going away, so when I came home, I decided to see my GP. 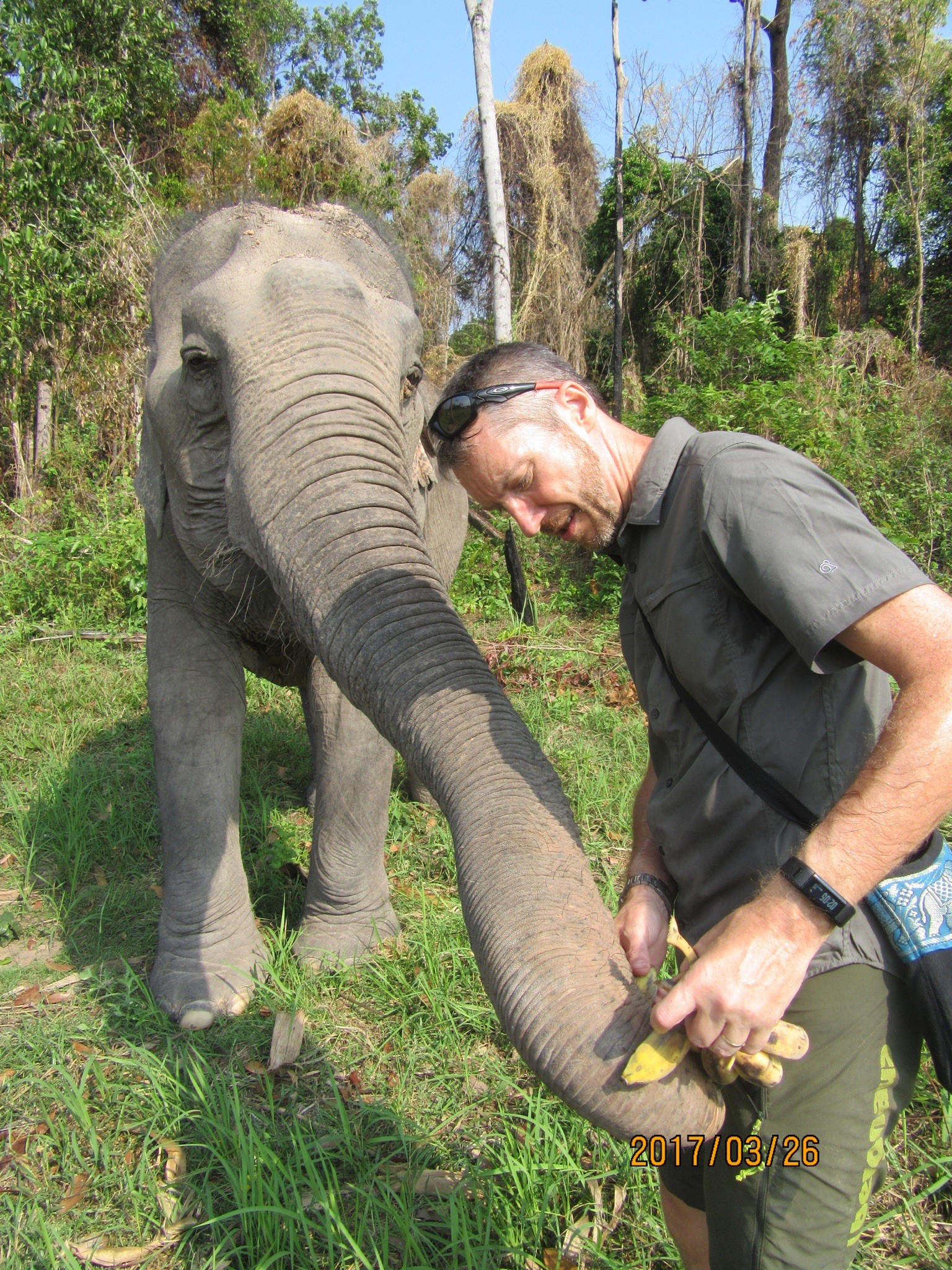 I was first tested for tropical diseases, which all came back as clear. The GP then sent me off to an ear, nose and throat (ENT) specialist, as the tinnitus was still there. They did an MRI scan and noticed something a lot more sinister away from my ear, on the opposite side of my brain. They wrote to me saying I urgently needed a further MRI of my brain. Having been told that the matter was urgent, however, almost four weeks went by and I hadn’t received my appointment, so I rang and chased it myself!  I was referred to the Regional Neurosciences Centre at the Royal Victoria Infirmary in Newcastle-Upon-Tyne. It was there, on 14 February 2018, that I was given my diagnosis; they had found a grade 2 oligodendroglioma that would need to be removed. I remember walking into the room and seeing a nurse specialist with the consultant and remarking that it didn’t look like I was going to get good news!  When I was given the news, I did what has got me through most of my life and just made a joke of it. On the way to my appointment my mobile phone provider had rung about my contract renewal and I said I’d get back to them.

“I simply asked the consultant whether I should opt for a one or two-year contract, or whether I might be better on pay-as-you-go! This broke the ice and made everyone feel less awkward.” 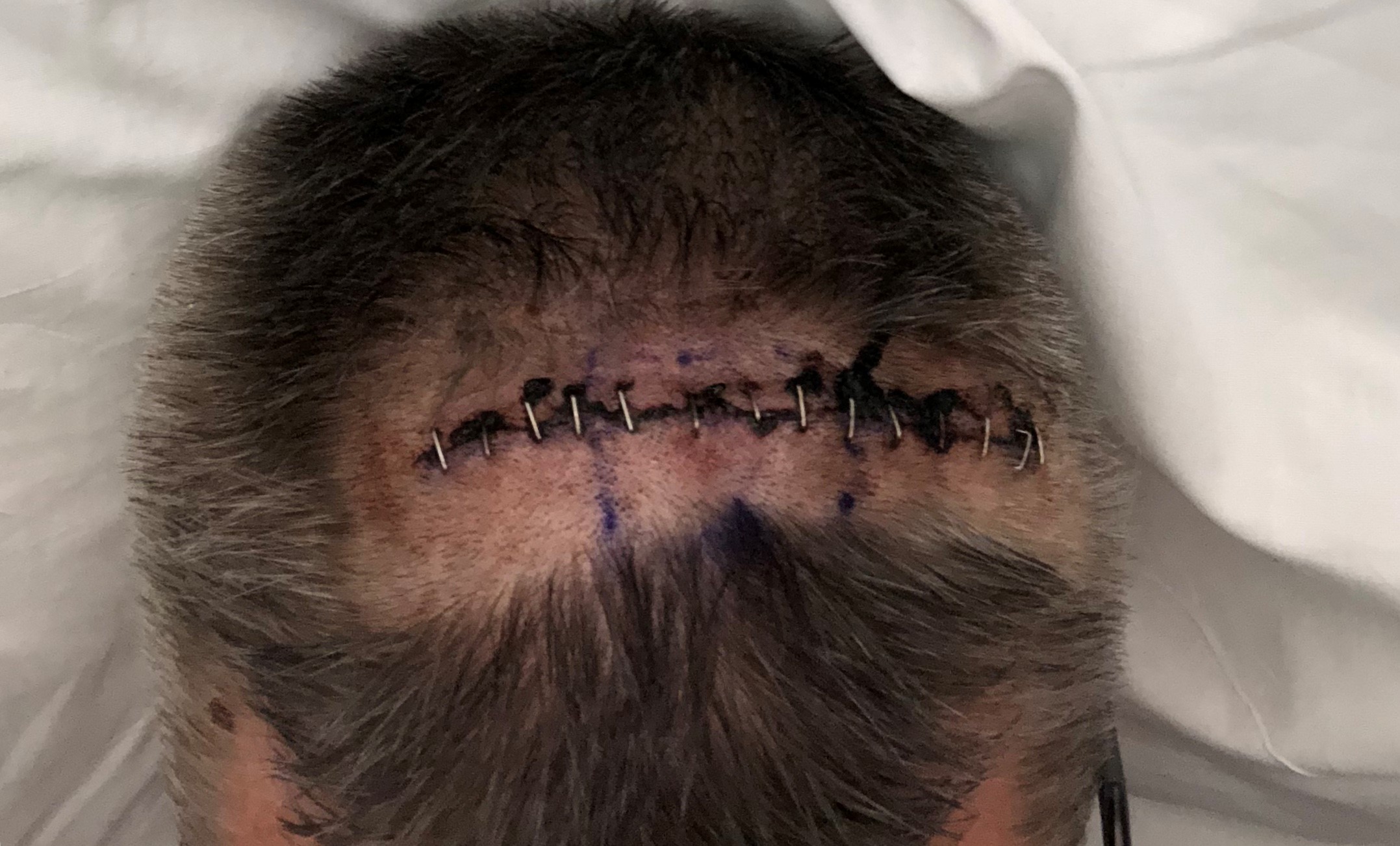 I was warned that the tumour was in an awkward place, where I could be left with speech difficulties, facial palsy or, really worrying for me, loss of movement down my dominant right-hand side. For someone used to running marathons and cycling over 100 miles at a time, this was deeply distressing. I had my craniotomy on 4 May 2018, 11 weeks after my diagnosis, which I believe is way too long. Were I not such a positive person, I’m sure the worry would have been truly awful. The majority of the tumour was removed and the operation was followed by six weeks of daily radiotherapy, then six cycles of chemotherapy, which I finished at the end of April 2019.

“When I told people about my diagnosis, it came as a huge shock.  I was the image of fit and healthy (for an old man anyway), so it took some believing.”

After returning from travelling I had taken on a new job in July 2017. I felt really awkward that just eight months later I had to have time off because of my brain tumour. I felt I’d let my business down and I obviously wouldn’t have accepted the role had I known. The more I’ve looked into it, the more people I’ve discovered who’ve also been affected by brain tumours in one way or another.  When you look at the level of awareness and funding for brain tumours, compared to other cancers, which are curable, it is nothing short of disgraceful.  What is it that made me, a fit and healthy man, get a brain tumour? Nobody can answer that and that’s because not enough funding goes towards finding a cause and a cure. The fate of a brain tumour patient is often down to the skill of the surgeon. Luckily, I got a good one but one slip may have put me in a wheelchair.

“Radiotherapy and chemotherapy are relatively blunt instruments killing lots of healthy cells; I believe we need a much more targeted approach.” 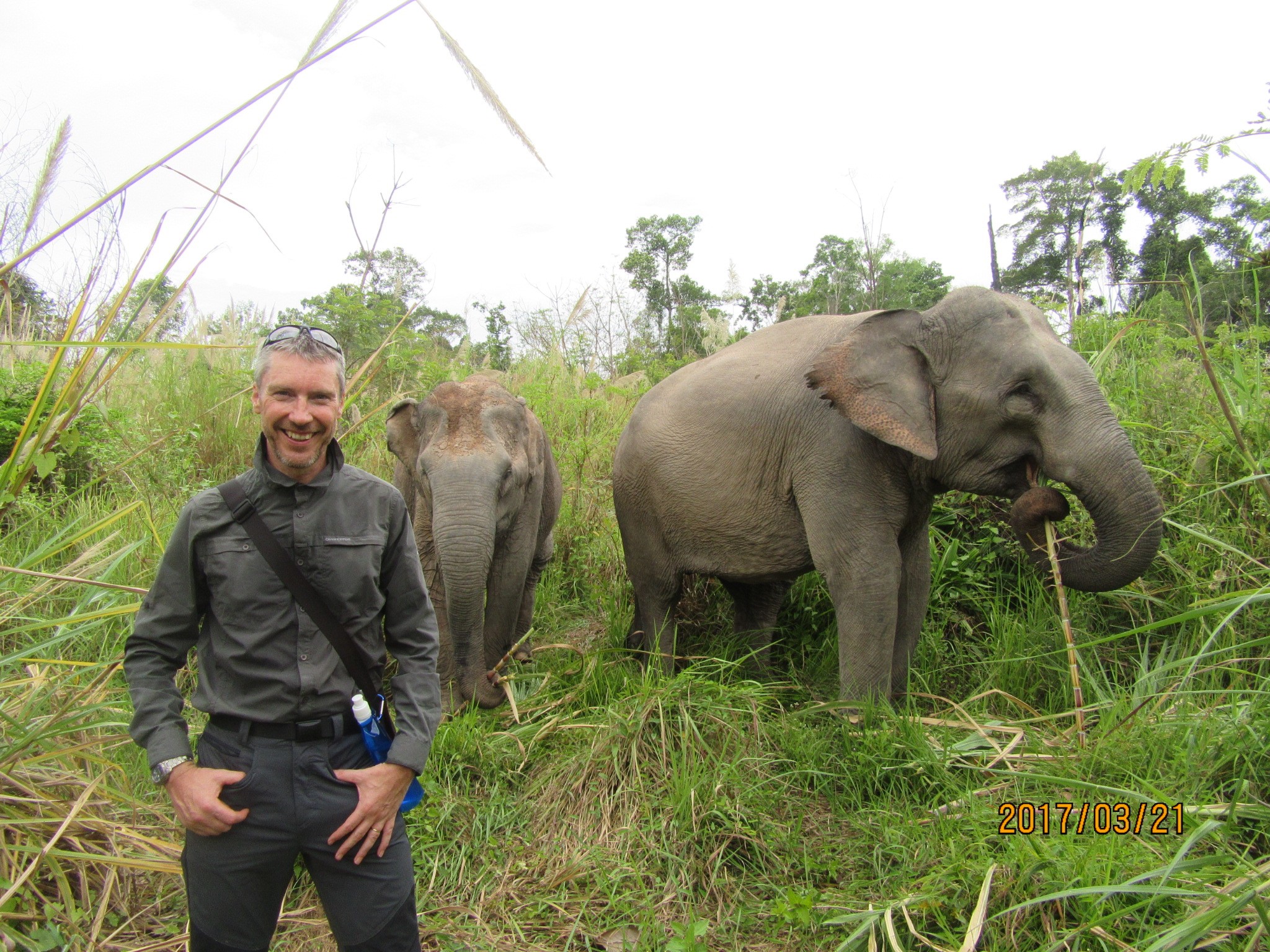 I came across Brain Tumour Research when I was looking for information following my surgery.  I genuinely didn’t “google” anything related to brain tumours before my operation, as you tend only to see the worst side of things.  The stories I read on the Brain Tumour Research website gave me reassurance that this is doable.  I will never be the person I was, but this is a chance to carve out a new (albeit not as long as I was expecting) life, doing things that are important to me.

“Whilst the remnants of my tumour remain stable, I have been left with a legacy of epilepsy.”

Having had my first big seizure shortly before having my radiotherapy mask moulded, they have continued ever since. I am currently under the care of an epilepsy consultant, who is trying to find the right dosage of drugs to control them. Thankfully, other than the epilepsy, the side effects I’ve suffered as a result of my treatment, are limited. I trained right up until the day before my operation, to make sure I was going into it as heathy as I could be (plus if it went wrong at least I’d leave as a good-looking corpse!), so I think that helped. I put my trust in my oncologist; I’ve been lucky to have an amazing one. I never really suffered through radiotherapy; I continued to work every day, popping out on a lunchtime to get ‘zapped’. To anyone facing chemotherapy, I would say that it isn’t something to fear. Admittedly, I had to give up working before undergoing treatment, but it wasn’t as bad as I expected.  It was just a case of six cycles, five days of feeling rough per cycle, plus two days feeling less rough!  I just broke it down that way and mentally ticked it off. 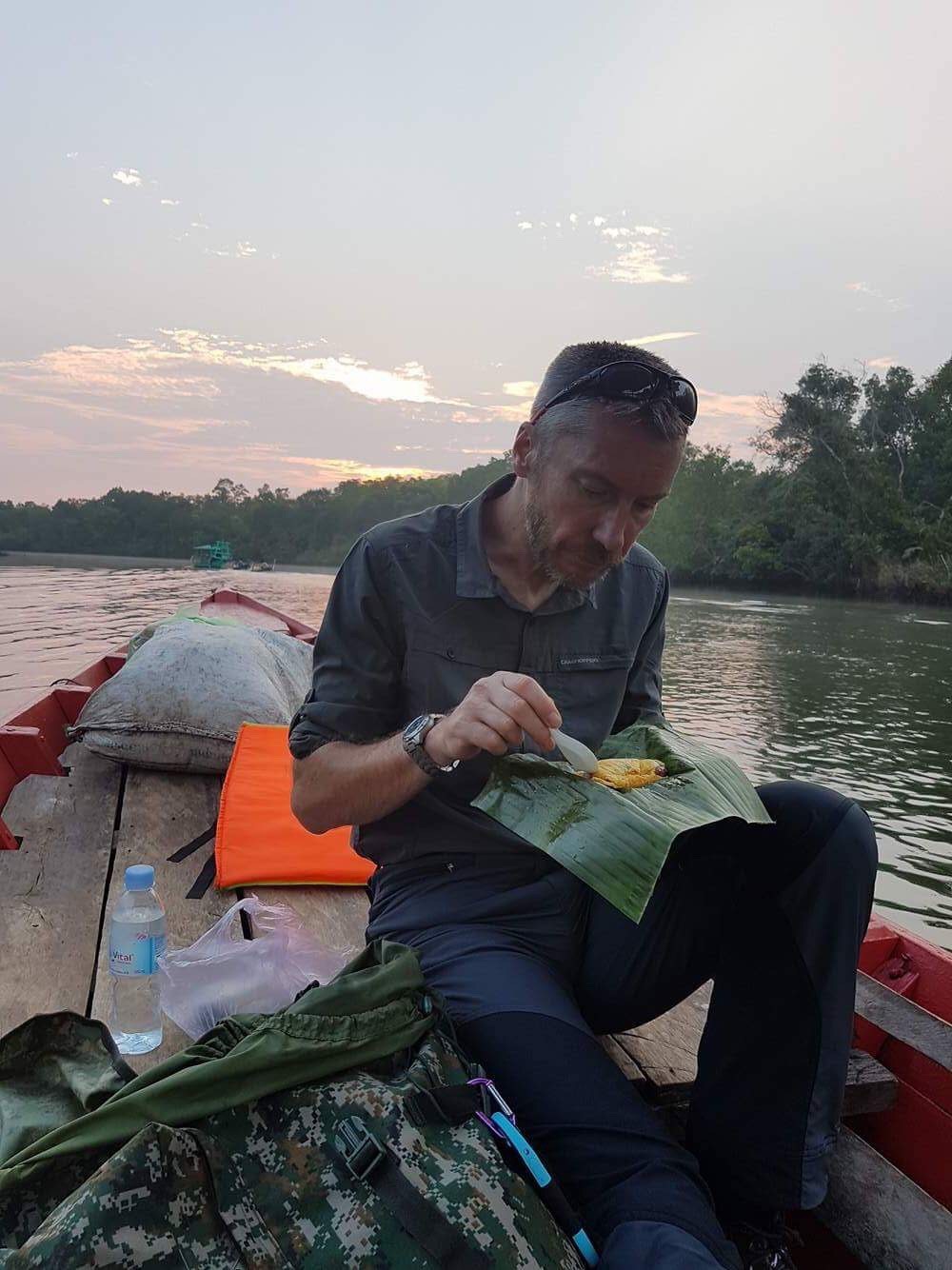 If you find yourself in my position and are offered a clinical psychologist, then bite their hand off. My psychologist has helped me cope with the mental challenges I had. I went from having great jobs, good salaries, a comfortable lifestyle and being fit and active to being someone who can’t get out of bed some days. It affected me mentally more than it did physically. Losing my driving licence was a real blow. I’d probably have it back now, were it not for the epilepsy, but I’ve rationalised that. The mental “systems” that used to be useful like drive, stress, pressure to succeed etc. aren’t particularly useful and conducive to a good recovery!

“Whatever you do, don’t compare your recovery to anyone else’s. Your recovery is personal to you.”

The next step for me is to get the epilepsy under control and then think about finding a career again. I probably won’t go back to what I used to do but will try to find something that works for me. I’d be interested in a role helping people work through the benefit system, which I found – as someone who was capable of running businesses – very, very difficult to get my head around. I want to do something that I can enjoy for the time I have left.  As the tumour is stable at the moment, I’m on six-monthly scans and I will just take it from there. When it grows again (which it will), I’ll just deal with that and whatever I can change I will and what I can’t, I won’t worry about. 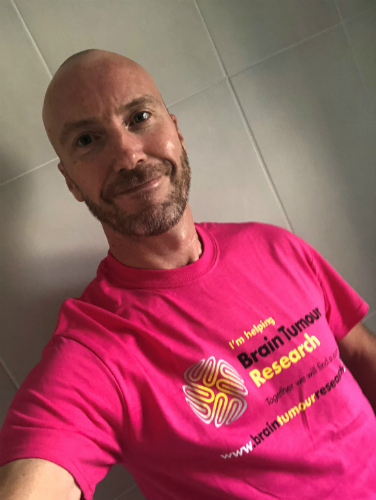