London lad, Adam Carroll, was on a work trip to New York when his brain tumour first revealed itself. Aged 33 at the time, Adam collapsed and was rushed to hospital where he was told the devastating news that he had a high-grade tumour. The months that followed weren’t without their drawbacks but, 18 months on, he is now putting his time and energy into running and fundraising for research into the disease.

“I’ve been through a lot but I truly believe my diagnosis has made me a better person – I’m so much more appreciative of life and I just want to do whatever I can to help others with this disease. By fundraising for research into brain tumours, I know I’m doing something positive.”

It’s crazy how much life can change in the space of a year. If someone had told me 18 months ago that I’d be running marathons, I would have told them they’d got the wrong guy. I suppose you could say I was a bit of a lad before, I liked going out with my mates and fitness was the last of my worries.

I grew up in Kent with my parents, my older brother, Daniel, and older sister, Lisa. We’re a tight-knit family and since my diagnosis, I appreciate them more than ever. Even after I moved to London, we kept close and I see Daniel and Lisa every other week at Spurs’ home matches.

I was 33 and life was sweet: I had my friends, my family and a decent job in IT – what more could a guy want? One of the perks of working for the stockbroking company JB Drax Honoré was that I had the opportunity to fly out to New York to work in the offices there in June 2017. However, what started as a week-long work trip turned into the most terrifying month of my life.

I’d been on the trading floor and was walking over to someone’s desk when I collapsed. All I remember is everyone around me bantering and laughing, thinking I’d stacked it and fallen over. The next thing I knew, I was on a stretcher with an oxygen mask strapped around my head. It was the worst thing ever and, apart from the first-aid guy from the office, I was all on my own.

Just six hours after being rushed to the NewYork-Presbyterian Hospital, I was in theatre for a biopsy. I have no idea how long I was in there for and how long I was unconscious afterwards but when I finally came around, there stood my dad at the side of my hospital bed. I couldn’t believe it. The poor fella had literally retired from work that same day, and just as he got home and put his feet up with a beer, JB Drax had sent a car to collect him and take him to the airport to be with me.

It was a terrifying and confusing time, and when they told me the biopsy results I was just as baffled. A grade 3 brain tumour? I’ve never known anyone with cancer, let alone a brain tumour, so I just couldn’t wrap my head around it.

After a few days of rehabilitation and being monitored, I was discharged from hospital. It was such a mad time; most people would love the chance to mooch around New York for a few days, but when you’re coming to terms with having a brain tumour, it’s not all that fun.

The hospital called me back in for an operation to resect the tumour and, as frightened as I was, I felt like it couldn’t have happened in a better place or at a better time. I had private medical insurance through work and I was being treated by the top neurosurgeon Dr Theodore Schwartz so I knew I was in safe hands. The resection lasted for about six hours and Dr Schwartz told me he’d removed as much as possible. I couldn’t have hoped for more than that.

Dad and I stayed in New York for another week before flying home. If I’d left any sooner, I would have been setting all the alarms and scanners off in the airport with all the staples and pins in my head.

It was when I returned to England that the events of the past week really hit home. I was signed off work for nine months and suddenly I had all this time on my hands to mull over what had happened.

In August, I started six weeks of radiotherapy at the University College Hospital Macmillan Cancer Centre. Thankfully it wasn’t as tough as I was expecting it to be and I had 100% confidence in the radiotherapists there, who were so supportive and friendly that they became like a second family to me.

It was around this time that I started running – which just goes to show how bored I was as a few months before I wouldn’t even have run for the bus! It was quite a lonely period too; friends and family were all working and it felt like life was moving on for everyone except me. A friend of mine had been on the Channel 4 show ‘First Dates’ and had loved every second of it, so I thought ‘why not?’ and applied myself.

I knew I had a bit of a ‘sob story’ so I didn’t hold anything back on my application and within weeks I was there filming. My mate told me the interview usually takes no more than an hour but I was in there for three hours, pouring my heart out. It was cathartic to open up about my brain tumour to total strangers, it was like a free therapy session! It was a great experience and although I was unlucky in love, the lady I dated is now a friend for life.

Running became a regular hobby for me and I found it really helped my mental wellbeing while I was off work. I kept it up even when I started chemotherapy in October and when I returned to work in February 2018.

Getting back into the swing of full-time work was difficult, and there was so much I had to learn all over again, but I was glad to be getting back to normality. I was really lucky to have had full sick pay while I was off, but the boredom and loneliness was a struggle. I knew I could have turned to my family during this time, and they would have been there for me, but I had to stay positive around them. Seeing them upset would have been too much to handle, and likewise if they’d seen me upset then it would have been really tough on them.

Speaking so publicly about my brain tumour on First Dates meant I was getting to know other people with the disease. I was shocked how many people have had experiences like mine, and how people from all walks of life are affected. Getting to know these people and hearing their stories made me want to give something back, and so I decided to fundraise for research into brain tumours. My first challenge was the Hackney Half Marathon in May 2018, which I ran with my mate Lee, and this month we’ll be running the Royal Parks Half Marathon too. When I cross the finish line, I’ll be able to look back and say: ‘wow, look how far I’ve come’, in more ways than one.

At the moment I’m just taking each day as it comes. My chemotherapy ends this month and next up is a 12-month course of immunotherapy. I’ve been through a lot but I truly believe my diagnosis has made me a better person – I’m so much more appreciative of life and I just want to do whatever I can to help others with this disease. By fundraising for research into brain tumours, I know I’m doing something positive.

If you have been inspired by Adam’s story, you may like to make a donation via https://www.justgiving.com/fundraising/ziggyandadsroyalparkshalf or leave a gift in your will via www.braintumourresearch.org/legacy 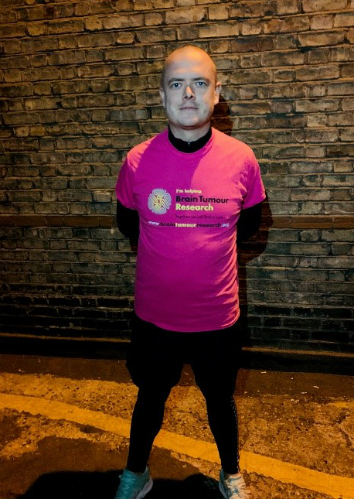